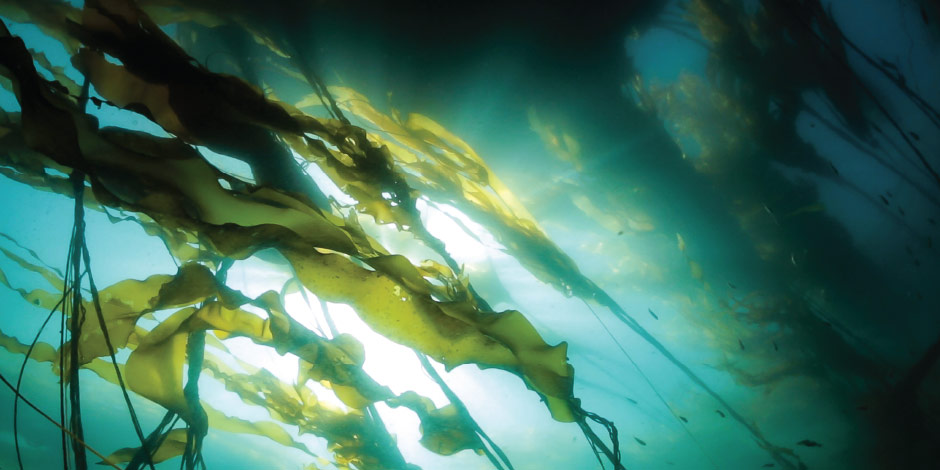 “It’s getting too damn warm in the Salish Sea,” explains aquatic ecologist Bill Heath. He goes on to tell me about gametophytes, sporophytes, sori, and the lethal effects of sea surface temperatures that now regularly exceed 18C during the summer months in our local waters. What he’s trying to explain is why the kelp forests have vanished: “Reproductive stress starts at about 16C, but 18C is lethal with prolonged contact.” He sounds like he knows what he’s talking about.

“It used to be that if you wanted to take your boat to Campbell River from Comox, you’d have to go a couple of miles out of your way to find a path through all the kelp—around the big kelp forest at the Cape Lazo shoal,” adds Dan Bowen, a Project Watershed director, “It is pretty much gone now except for one little patch. It’s the same story all the way to Nanaimo.”

Bull kelp is an example of what ecologists refer to as a foundation species. Like the foundation of a building, it provides the ecological structure that holds everything else up. Juvenile salmon for example, rely on kelp forests as a safe haven where they can take cover from predators and find an abundance of food. The dramatic loss of these majestic undersea gardens from the Salish Sea region has been estimated in the range of 80-95%. This recent kelp crisis is likely connected to the poor marine survival rates of salmon, and by extension, perhaps the demise of other species too. Sea urchin, crabs, giant pacific octopus, surf smelt, lingcod, rockfish, and various anemones, even the iconic Orca—the list of species that rely on bull kelp is long. The annual harvest of bull kelp as a K’ómoks First Nations traditional food resource has also, sadly, come to a halt.

Bull kelp (Nereocystis luetkeana) is one of the fastest growing plants on earth. Some sources report growth rates up to a staggering 60cm per day—all the more reason why its recent disappearance from our coast is such a surprise. It’s also an annual. The long whips strewn across the high tide line after winter storms that inspire children and playful adults alike grow anew each year from microscopic spores. There are no old-growth bull kelp forests.

The long blades of bull kelp flow through the water like flags atop a dancing flagpole. It’s on these long blades at or near the surface of the sea where the reproductive parts of the plant are located. Normally the blades split open in the summer, releasing millions of fertile propagules that slowly sink to the bottom to eventually become next year’s kelp forest. In recent years however, our sea surface temperatures have regularly sustained or exceeded the lethal temperature threshold right at the critical time when the kelp’s reproductive structures are forming. The bull kelp is effectively sterilized before it can restart the cycle of growth.

Bill Heath and Dan Bowen know that they can’t cool the seas. Global levels of atmospheric carbon dioxide have skyrocketed to above 400 parts per million as of December 2015. Prior to the industrial revolution, 250 ppm was the norm. If everyone on earth stopped burning fossil fuels tomorrow, it would still take many decades for sea surface temperatures in Baynes Sound and the Comox region to return to 1850s temperatures.

Restoring our lost kelp forests and recovering the health of our marine ecosystems is a dream that Bill, Dan, and others in our community refuse to let go. Bill and Dan are board members of Project Watershed (www.projectwatershed.ca), a progressive and action-oriented Comox Valley not-for-profit organization known for big dreams and even bigger successes. With the generous support of the Pacific Salmon Foundation’s Salish Sea Marine Survival Program, along with committed local donors and volunteers, Project Watershed and its partners are literally turning the tide.

“It’s quite simple really,” says Bill, “we are identifying sources of bull kelp that seem to be able to persist in the warmer waters to the south of us and we are bringing it up here. The bull kelp from Sansum Narrows off of Salt Spring Island seems to work.” I’m not so sure. Three cups of coffee later and he is still explaining the process of sexual reproduction in bull kelp to me. At the end of the day, what you get is a spool of twine inoculated with microscopic baby kelp plants. The twine is then spiral-wrapped around a 30m length of heavier gauge rope with an anchor attached to each end and dropped overboard in a suitable location. Two or more seeded lines are deployed in this fashion, in a rectangular array. The young kelp plants attach to the weighted rope with their characteristically vice-like grip and in no time a new bull kelp forest, one resistant to warmer temperatures, develops. Once established, the warm-adapted kelp is able to reproduce successfully and sustain a kelp forest through multiple generations.

Data loggers are fitted to the anchors that record temperature and light every 30 minutes. In addition, all sorts of environmental parameters from temperature to salinity, to the pH, turbidity and chlorophyll (plankton blooms) are measured twice monthly when divers from Hornby Island Diving go out to check on things regularly and obtain data from the loggers. It’s been a couple of years of experimental tweaking, lucky breaks, and a bit of help from Mother Nature, but it seems like Dan, Bill, and the Project Watershed team now have it figured out. Luckily the kelp rope floats a little, so instead of laying flat on the sea floor, it makes an arch between the two anchors. This seems to keep the young plants safe from the armies of sea urchins that move around like robot vacuum cleaners sucking up all plant life from the sea floor. At one point, kelp crabs, which also feed voraciously on bull kelp, moved in and threatened to wipe out the new colonies, but the local Octopus population stepped up to keep the kelp crabs in check.

Bill’s eyes shine with a characteristic glimmer: “We’ve now got planted sites out at Maude Reef near Hornby, Eagle Rock near Denman, and at the Royston wrecks and Cape Lazo shoal. I think it’s working!”

To contribute to projects like this that support the restoration of our local marine environments, please support the work of Project Watershed at projectwatershed.ca 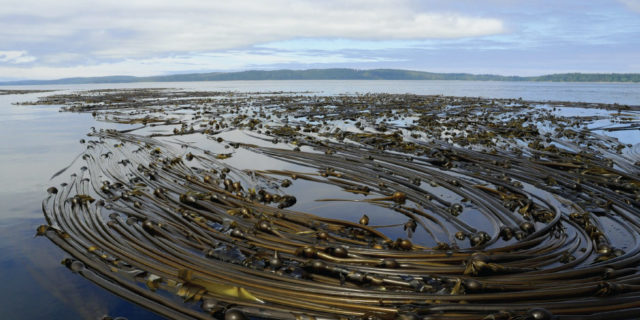