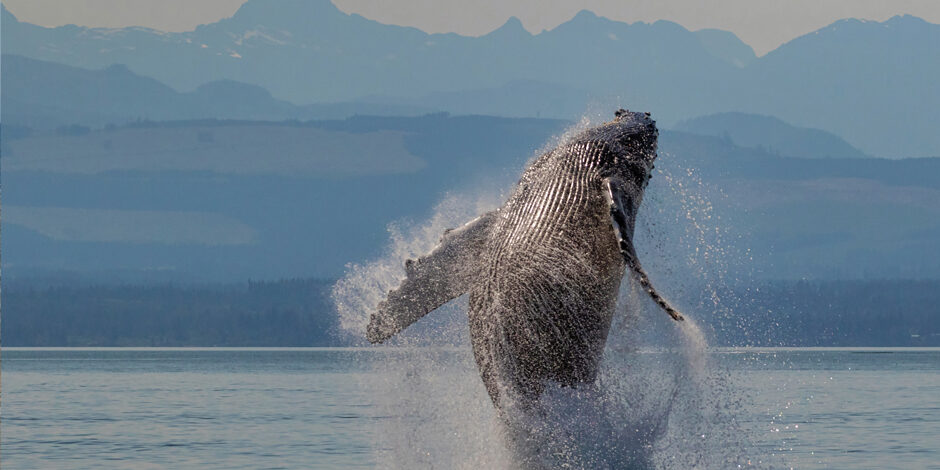 Hunting nearly emptied the Salish Sea of whales. Many species are returning—but they’re still at risk.

“We so rarely get second chances,” says whale researcher Jackie Hildering, the co-founder of Port McNeill-based Marine Education and Research Society (MERS). “There is no doubt that the giants have come back. But there are still so many ways to kill a whale.”

For thousands of years, this area teemed with the world’s largest marine mammals: blue, humpback, right, grey, and fin whales. And while some coastal First Nations hunted whales—sustainably, respectfully, using all parts of the animal—the nations of the Pentlatch and K’ómoks people did not, perhaps because food resources like deer, fish, shellfish, seals, and sea lions were abundant and accessible.

Europeans began to arrive on British Columbia (BC)’s coasts in the mid-1800s to hunt whales for their oil. This was the start of more than a century of whaling that would drive several whale species close to extinction. It intensified and moved to Vancouver Island’s west coast, and further offshore, with the evolution of technology like steam-powered ships; high-powered, cannon-launched explosive harpoons; and new rendering techniques.

Names on nearby islands remind us of a past when whaling was as much an industry as forestry, mining, and oil are today: Whaletown on Cortes (BC’s first whaling station, established in 1869), Blubber Bay on Texada, Whaling Station Bay on Hornby, and Whaler Bay on Galiano.

At these whaling stations, and others—including Page’s Lagoon (now called Piper’s Lagoon) near Nanaimo, Sechart Station in Barkley Sound, Coal Harbour in Quatsino Sound, and two stations on Haida Gwaii—whale blubber was stripped and rendered into oil to be used for lamps and machinery. Whale oil was also an important ingredient in the manufacture of nitroglycerin for explosives in both world wars. In later years, the oil was used in margarine, cosmetics, soaps, and detergents. Whalebone and baleen were used for corsets, umbrellas, fertilizer, and chicken feed. Meat was canned for pet food and, in some cases, for human consumption overseas.

By the early 1900s, most of the whale species hunted were gone from the Salish Sea. Piper’s Lagoon closed in 1908 after the region’s entire population of 95 humpback whales was wiped out in less than two years.

But the industry continued elsewhere: between 1907 and 1967, coastal BC whaling stations recorded 24,862 humpback, sperm, fin, blue, and sei whales killed.

BC’s last whaling station, which was located in Coal Harbour, only shut down operations in 1967. Only then did the cetaceans of the Salish Sea begin to get a second chance.

The comeback of humpback populations was catalogued by both Fisheries and Oceans Canada (DFO) and not-for-profit organizations until 2010. Since then, the not-for-profits have continued the count.

Tasli Shaw and Mark Malleson, founders of salishseahumpbacks.com, have been documenting the return of humpback whales in the region since 1997. In that time, they have identified 601 individuals in the Salish Sea or the western entrance to the Juan de Fuca Strait.

MERS also tracks the humpbacks; its longest dataset is for humpbacks along northeast Vancouver Island. Until 2000, Hildering says, “We were in the water a lot and rarely saw humpbacks. We never documented more than five in a whole year.”

In 2019, MERS documented 96 individuals in the same area—many of which the researchers had seen before—including four new calves. Hildering says many of these whales have made their way here from breeding grounds in Hawaii, Mexico, and possibly Central America and Japan.

“These whales have a sense of place. They’re not just blundering around our waters. They are our fishing neighbours, coming back to specific places they know they can feed well using specific feeding strategies.

Though the whale hunt has ceased, people continue to be a threat to whales in so many ways. Human-caused climate change alters the ocean temperatures, affecting the distribution and abundance of plankton—the fuel for the marine food web, including the krill and small schooling fish upon which humpbacks feed. Overfishing of herring, pollution, entanglements, and boater collisions are ongoing issues. There is also concern about noise pollution from human activity in the oceans and how it impacts whales’ life processes, from finding food to communication.

Today, whales in the Salish Sea have once again become an important piece of coastal BC’s economy: the comeback of the humpbacks has reinvigorated the whale-watching industry.

But we’d be wise to look to First Nations culture—which prizes the inter-connections of people, the land, the ocean, and all living creatures—to guide our future relationships with the giants of the Salish Sea.