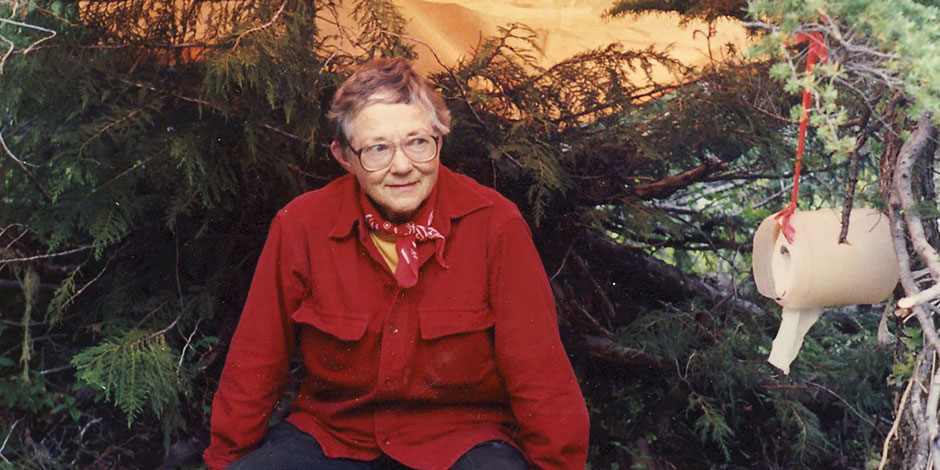 A SELFLESS PROTECTOR OF ALL THINGS WILD

Remembering the legacy of Ruth Masters and the priceless gifts—both physical and intangible—that she bestowed on our community.

If you could divide people into two categories, there would be those who spend their lives taking from the planet, and others who spend it giving back. Ruth Masters, who passed away last November at age 97, fell into the latter category. Born in 1920 and raised in the Comox Valley, Ruth was a World War II veteran, an outdoors woman at a time when climbing mountains and skiing was mostly a man’s pursuit, and a tireless environmental advocate. Among many conservation convictions, she was a rigorous defender of wildlife and all things wild. In the 90s, she was arrested for interrupting a Vancouver Island bear hunt. Around the same time, during the “War in the Woods” in Clayoquot Sound, she played O’ Canada on her harmonica while protestors were hauled away in RCMP vans. Over the years she doggedly defended Strathcona Provincial Park from corporate and government neglect.

I first met Ruth in the late 90s not long after moving to the Comox Valley for a reporting job at a community newspaper. I gravitated to writing about nature and the outdoors, which inevitably led me toward Ruth’s front door on Powerhouse Road, the Masters’ family homestead first settled by her parents. They shared their forested acreage next to the Puntledge River with black bears, deer, cougars, and a host of bird life. It was this backyard wilderness that likely informed Ruth’s lifelong sense of duty to the planet.

Any visit to Ruth’s house was like a visit to the situation room of an environmental campaign being waged on multiple fronts. She was a legal secretary by day, an activist to the core, and a formidable writer of letters to the editor. Every square centimetre of her kitchen table was piled high with newspaper clippings, photocopies, and hand-typed letters. During one visit she gave me one of her red leather bookmarks on which she had written, “the news guy.” I’m still not sure whether the gesture was meant as a complement, but I still have it and will always keep it. What made Ruth special was her unabashed patriotism. Not that mindless flag-waving sort of nationalism that is the cause of so much trouble in the world; hers was a patriotism steeped in respect for nature. She once told a TV reporter that nobody could tell her she couldn’t defend Canada, whether they were wearing a police uniform or a politician’s power suit. Though she was a lifelong NDP supporter, she was no shrill lefty ideologue. Ruth simply believed that wildlife habitats need to be defended from the excesses of industry and development, full stop. But she wasn’t without humour and levity. She awarded many of her fellow citizens with “hero spoons,” her way of acknowledging the efforts of others to make the world a better place.

Ruth was also a person of great humanity and compassion; you could often find her rescuing wildlife that she found injured on the road, giving to the homeless, and digging up and relocating native plants prior to land clearing for development like she did years ago before the ground was broken for the Wal-Mart construction in Courtenay. This is an effort that on the surface would seem hopelessly quixotic if it wasn’t Ruth on the end of the shovel. For her, such small gestures were an embodiment of living one’s truth. That’s a lesson we can all learn from.

It’s the reason she left an indelible mark on her Vancouver Island home turf and was an inspiration to many with her cheeky wit and plainspoken yet wise social commentary. Her commitment to conservation went well beyond rhetoric and the blockade or protest line. Ruth’s generous spirit hit home for me when my wife and I bought a house a block away from her Powerhouse Road homestead. Around that time, Ruth announced a donation of 7.3 hectares to the City of Courtenay to be preserved forever as the Ruth Masters Greenway. We have walked through this beautiful forest every fall since, on the way to observing salmon spawning in the side channels of the Puntledge River, or in the spring, to see trilliums bloom by the thousands. During the morning commute to my girls’ elementary school we’ve spotted black bears foraging for spring bulbs. It is a classroom much richer than any found within four walls. Years ago I was jogging along one of the greenway trails and met Ruth as she hobbled along with one walking cane; for an octogenarian, she was surefooted as a mountain goat. I told her how much we appreciated her gift, but made the mistake of calling it a “recreation” corridor. I was quickly corrected. “Oh Andrew, it’s a wildlife corridor, not a recreation corridor,” she told me in her plainspoken manner.

Her gift of land is a gift to nature; we as neighbours just happen to be the co-beneficiaries. Given the current local real estate frenzy in the Comox Valley driven by migrants from the lower mainland’s affordability crisis, you can’t put a price on the value of Ruth Masters Greenway. It’s priceless. Just as a young Ruth would have explored the woods behind the family home, my kids now walk the same forest and learn life-informing lessons about the natural world. That is part of Ruth’s selfless legacy that we celebrate every time we walk through that recreation—I mean, wildlife—corridor.

PHOTOS BY FRIENDS OF RUTH MASTERS 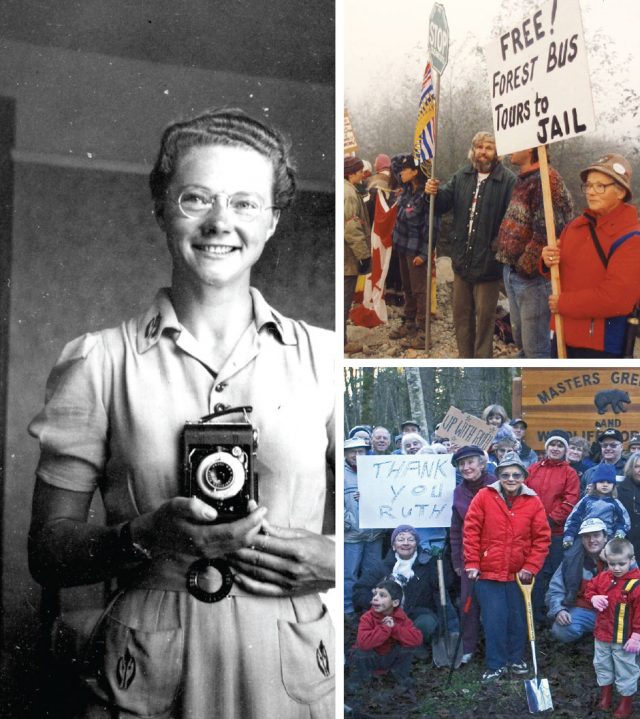