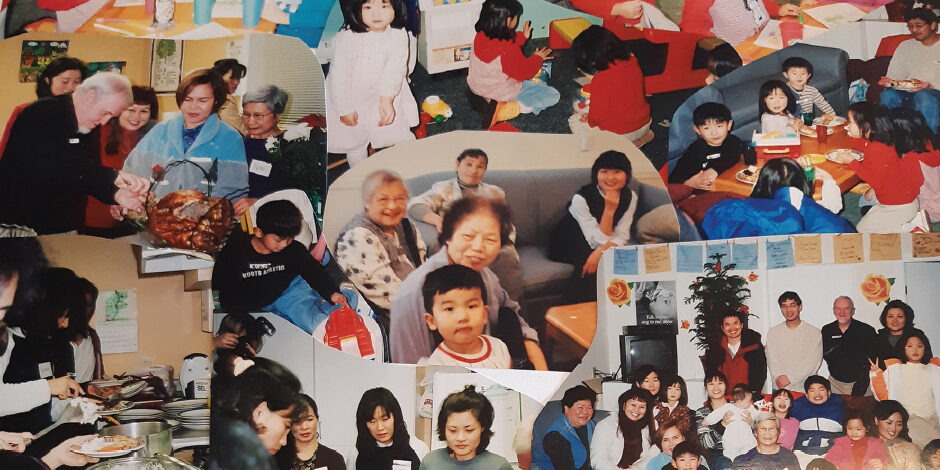 SHELTER IN A NEW LAND

For decades, private sponsors have been helping refugees find safe haven in the Comox Valley.

On a sunny summer evening, Janeth Recinos served up delicious pupusas filled with shredded pork and fresh salsa from her mobile kitchen next to the Courtenay Slough.

“This is real El Salvadoran food,” she said, while her husband Mario connected a full propane tank to the grill.

Business is brisk at the Pupuseria Las Gemelas, the food truck that Janeth and her twin sister Lorena launched a few years ago.

Life sometimes has a way of taking people to unexpected places. In 1990, a 21-year-old Recinos was holed up with her four-month-old daughter and seven other family members, including her mother, in one room of a Costa Rican safe house. They had fled war-torn El Salvador almost a year before, hoping to join Janeth’s father, who had already made his way to Canada. However, a glitch in her mom’s immigration paperwork had left them in limbo in Costa Rica.

In the cruel calculus of a violent Salvadoran political struggle between leftist guerillas and a ruthless right-wing military dictatorship, the Recinos were vulnerable. As the owner of a 500-acre farm (and a pilot employed by the El Salvadoran government), her father was an obvious target. And by association, so was his family.

“At one point we had guerillas living on the farm, and the next there were soldiers,” Recinos told me.

Life became untenable and unsafe. The family decided they had no choice but to leave El Salvador and go to Canada as political refugees. Other than hope for a new life and fresh start in a peaceful, prosperous country, they had no idea what the future held.

Meanwhile, as the Recinos waited in Costa Rica, Sue Rambow and other community-minded individuals in the Comox Valley were fundraising, networking, and laying the groundwork to help the family resettle here.

Rambow is a devout Catholic for whom faith without good deeds is a shallow conviction. And if there’s one thing that keeps her awake at night, it’s the ongoing plight of refugees around the world. According to the United Nations High Commissioner for Human Rights, there are an estimated 26 million refugees in the world at this moment, fleeing violence, poverty, and persecution. For more than four decades, this has been the focus of Rambow’s life.

Her journey to help the world’s marginalized began in the late 1970s, when the humanitarian tragedy of Vietnamese boat people unfolded on the nightly news headlines. It galvanized a global response as community groups like Rambow’s Emmaus Christian Life Community scrambled to help Vietnamese refugees find new homes in new lands.

For this Comox Valley-based group, community service is integral to faith. They’ve been inspired by a movement that blends community activism with Christian values to fight social and economic injustices. First articulated by Peruvian Catholic priest Gustavo Gutierrez, liberation theology emerged from Latin America in the 1960s and ’70s, when life was cheap under the rule of military dictatorships. So were human rights. Some self-serving priests parked their values and jumped into bed with dictators. Others, like Gutierrez, sided with the people. It was dangerous but profoundly important work.

Liberation theology argued that faith was much more than praying at Sunday Mass and asking for forgiveness; it was also about striving to make the world a more just and equitable place. This resonated with Rambow and her fellow Comox Valley activists.

At the time, things were changing in the way Canada accepted refugees. In response to the Vietnamese exodus, the Canadian government introduced a new program allowing private groups and individuals with adequate means and resources to sponsor refugees. This opened up new opportunities for groups like Rambow’s to put their humanitarian beliefs into practice.

What started as an effort to help a Vietnamese family land in the Comox Valley led to connections with people and cultures from around the world, including a second Vietnamese family, Janeth Recinos and her family (12 people in all), a couple from Bosnia-Herzegovina, and two families from Syria.

In 1999, on very short notice, Rambow and her fellow activists led an effort to settle a sprawling clan of 35 Kosovars who had been displaced by the former Yugoslavia’s long civil war. Helping bring the family from Kosovo here was something Rambow described as a “once in a lifetime” effort.

“We wanted to support them in the Comox Valley so that they wouldn’t have to be spread around Canada. We got seven churches to work together. We orchestrated everything. We had coffee houses. We got some local Croatians to translate for us. This was all done before we had cell phones,” she said with a laugh.

Though altruism is the guide, Rambow said it would be hard to put a value on how personally enriching the journey has been: “To be able to break bread with people who have suffered and persevered is priceless.”

Now all in their 70s, Rambow and her group are feeling the need to pull back on volunteer commitments, to slow down a little. But that doesn’t mean there’s any less need for refugee support. There are currently over 80 million displaced people around the world, and the pandemic has only compounded the challenge of helping would-be refugees escape strife and conflict to find new homes in safe countries.

“I’m hoping we can mentor others in the Comox Valley to take up this work. There’s so much need. I’m not about promoting the church. My faith embraces all people,” Rambow said. It’s part of her conviction, and where her Christian faith hits the dirt to make a real difference in the lives of the less fortunate.

Rambow’s been doing it long enough to see the children of families she helped resettle in the Comox Valley get married and raise families of their own. It’s like a large extended family, and it includes people like Janeth Recinos.

When Recinos landed in the Comox Valley, she spoke barely a word of English. On the one hand, it was intimidating to be a stranger in a strange land with an infant to care for. But on the other, she was filled with optimism and a sense of security that was in short supply in the country her family had left behind.

“It felt like paradise,” Recinos said, remembering her first impressions.

And she has thrived here. After learning English and studying to be a cook at North Island College, she began working at Glacier View Lodge, an assisted living home in Courtenay. Recently Recinos celebrated 25 years on staff. Along the way she raised four kids. And somehow she finds time to run the food truck with her twin sister Lorena—sharing a taste of Central American cuisine with the rest of the Comox Valley.

It’s safe to say the generosity extended to the Recinos family by Canadians three decades ago has been repaid and returned to their adopted country many times over.

That is the refugee experience. Each has their own unique story, whether Christian or Muslim, devout or not, rich or poor. At the core is basic humanity that binds us all and overcomes fear and hate with compassion.

Sue Rambow sums it up in simple terms: “You get back more than you give.”

The Private Sponsorship of Refugees (PSR) program allows private groups to sponsor eligible refugees. Sponsors support a refugee for the sponsorship period, usually up to one year. This includes start-up costs such as furniture and clothing; ongoing monthly costs for basic necessities including housing, food, and public transportation; and social and emotional support.

To learn more about how to sponsor refugees, go to canada.ca.