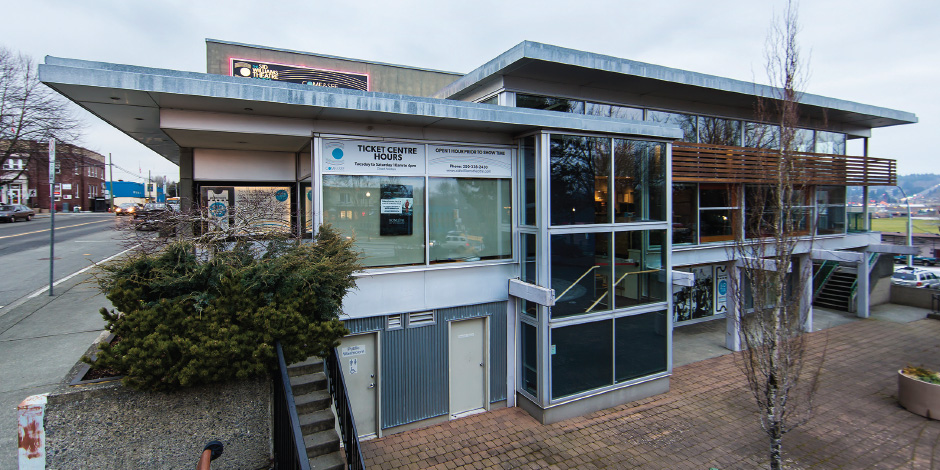 Lifting community spirits through the years.

It doesn’t feel like there are 500 seats inside the fairly boxy, grey, glass building at the corner of 5th Street and Cliffe Avenue in downtown Courtenay. If you’ve been to an event at the Sid Williams Theatre you know it feels much more intimate, a feeling that has been maintained since it started as a cinema in 1935.

From film festivals to rock concerts, the theatre has been host to a myriad of events (even a wedding!) in its over 80-year history. The building has evolved from cinema to auction house to community playhouse to performing arts centre.

Constructed as a state-of-the-art movie house in the mid 1930s, it was called the Bickle Theatre, and provided an entertainment escape during war times. It was one of many cinemas on Vancouver Island owned by entrepreneur E.W. Bickle. The rise of television, and competition from other Bickle-owned cinemas forced it to close in the 1950s. After a few vacant years, the 1960s saw the facility experience a revival as an auction house. During that time, amateur theatre, drama clubs, and musical groups were growing in popularity throughout the Valley and were in search of larger spaces for rehearsals and performances. Some of these groups used the auction house to rehearse and a growing sentiment to launch a performing arts venue was born.

The Riverside Hotel fire of 1968 was a key moment in the theatre’s history. The fire spared the theatre but destroyed the adjacent hotel and spurred the community into action. E.W. Bickle sold the theatre to the City of Courtenay and a theatre completion committee was created to find the necessary funds for renovation. Hundreds of individuals and businesses pledged their support by “purchasing” seats for one hundred dollars each, an innovative fundraising initiative at the time. These program proceeds, combined with government funding and a generous contribution by E.W. Bickle’s family, sparked a community labour of love.

The theatre reopened in 1971 as the Civic Theatre and a new civic square, featuring a picturesque rock fountain, occupied the space of the old Riverside Hotel. One of the theatre completion committee leaders was Sid Williams, a beloved performer and local citizen who served as a city alderman from 1942 to 1964, and president of the Courtenay Recreation Association for nearly 20 years. Sid’s acting career took him across Canada, most notably as Century Sam—the character he portrayed during celebrations for B.C.’s colonial centennial in 1958, Canada’s centennial in 1967, and B.C.’s centennial in 1971.

The Civic Theatre became a community playhouse with Sid as its one-man operating crew. In tribute to his incredible contributions to the community, it was named the Sid Williams Civic Theatre in 1984. From the Courtenay & District Museum’s exhibit Out of the Ordinary: Sid Williams, “It is an impossible task to fully capture his endless enthusiasm and contributions to the Comox Valley and Canadian community.” A professional staff was hired to operate the theatre after Sid passed away in 1991. The City of Courtenay closed the theatre in 1998 for critical upgrades and subsequently broadened the original budget to encompass a large-scale renovation, which included balcony seating, additional lobby and dressing room space, a concession, more washrooms, and technical upgrades. A theatre advisory committee, with Valley-wide representation, was created during this extended downtime to examine the theatre’s importance to the Comox Valley and to assess the theatre’s role in the community post-renovation; the committee’s work produced the Sid Williams Theatre Society, a registered, charitable arts organization.

While the City of Courtenay maintains ownership of the theatre, the continued focus of the theatre society’s mandate is to stimulate and enhance artistic, cultural, and economic activities in the Comox Valley and surrounding regions.

The mandate is fulfilled in various ways: providing the community with access to professional theatre services from ticketing to sound and lighting; offering subsidized rental rates for non-profit groups; presenting professional performers of various disciplines (performers who would not otherwise consider the theatre as a stop on their tours); and administering a bursary program to support post secondary education in the field of the performing arts.

Outwardly, you may not have noticed the growth. Over the last five years, on average, there are more than 200 booked days per year. Community or non-profit groups make up over 70 percent of all bookings. These vary from dance rehearsals to speaking engagements. Almost 20 percent of programming is presented by the theatre society and the remainder sees the venue as a roadhouse with commercial event promoters booking dates. It’s one of the busiest facilities of its size in the province.

How the theatre serves the community will continue to evolve. Changing technologies and audiences present real challenges. The economic environment is also a factor. But the Sid Williams Theatre, and the opportunity to experience various performing arts, is an important part of a spirited community.

Live performance is alchemy—what’s happening on stage at that moment is totally unique, even if the same lines are being spoken or the same songs are sung, night after night. In an era of increasing divisiveness, theatre-going is a collective experience that encourages empathy and connection. It’s a welcoming place to open one’s self up to new experiences or ideas. There’s no pressure to engage, you can simply observe. And it just might affect you in ways you least expect.

Visit the theatre or sidwilliamstheatre.com to see what’s happening. 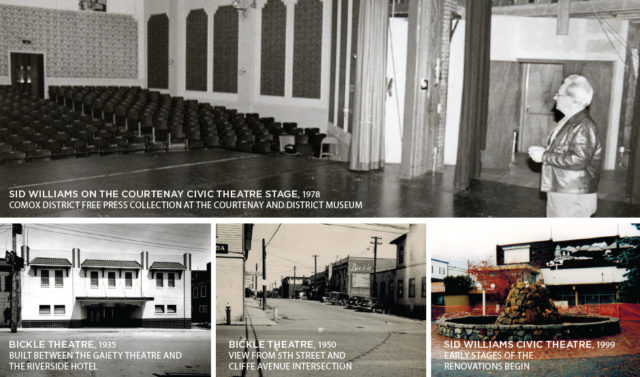