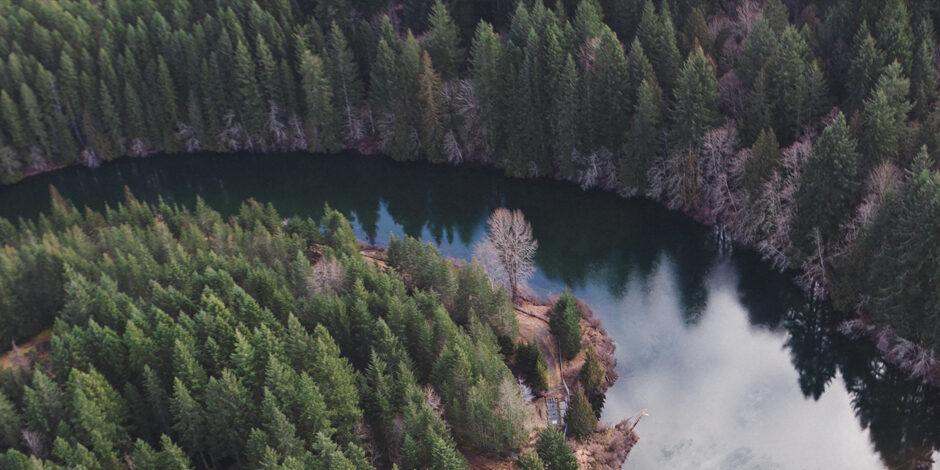 SPEAKING FOR THE TREES

The lush forest along the Puntledge River feels like a protected sanctuary, but some areas are slated for logging. A new local group aims to change that.

Devin Burton grew up in the Comox Valley but only recently discovered the Bevan trails, a network of paths winding through lush forest next to the Puntledge River and near the old Bevan townsite. If a forest has the ability to nourish the soul, then this is her sanctuary—a favoured place to walk her dogs year round and, in summer, to relax, swim, and read at a secluded bend in the river.

Like most people, Burton assumed this was a protected piece of riparian forest, given the official-looking BC Hydro trail signage, maps, and regular trail maintenance. She was wrong.

BC Hydro, a crown corporation, acquired land around the Puntledge River in 1953 for managing the Comox Lake Dam project. However, timber rights were not part of the deal. Those have been owned by various interests over the years—most recently by Hancock Timber Resource Group, a subsidiary of Manulife Financial Corporation.

In 1995, Hancock purchased the timber rights for 104 hectares near the Puntledge, including the forest around the Bevan trails and across the river, between Nymph Falls Nature Park and the Comox Dam.

Early in the fall of 2020, Burton saw a small notice warning trail users of imminent plans to log the forest: “I was stunned. This is a really well-used area and as soon as I heard that it was going to be logged, I started calling everybody.”

Her search led her to Graham Hilliar and Jen Alton (the authors of the sign that got Burton’s attention) who were equally concerned about the fate of this 7.5-hectare piece of forest. They found common ground around conservation and moved quickly to form the non-profit Puntledge River Forest Protection Society. By early November, a change.org petition—Save Bevan Trail Network—had garnered more than 3,500 signatures.

When it comes to land management around the Comox Valley, the public is at a distinct disadvantage. Ownership and title along the Puntledge River are as murky as the 19th-century land giveaway that has so profoundly shaped southeastern Vancouver Island, including the Comox Valley. Known as the E & N Land Grant, it was one of the largest land grabs in Canadian history. It gave coal baron Robert Dunsmuir 8,000 square kilometres of Vancouver Island in a backroom deal that paved the way for a coal-mining empire and an economic and political dynasty.

Today, the Bevan forest feels pristine. But beneath the towering Douglas firs—some nearing a century in age—and the electric green of the step moss lies the land’s industrial history. A concrete skeleton, now a canvas for graffiti, is all that remains above the Number 7 Mine. The mine began operation in 1902, giving rise to the company town of Bevan that had 100 rustic houses, a store, a hotel with a saloon, a post office, and a school. It’s barely a ghost town now. Look a little closer as you wander the Bevan trails and you’ll spot anomalous ridges of black soil—coal slag heaps recolonized by nature following the closure of Number 7 in 1922, after more than one million metric tonnes of coal had been mined from underground.

These traces of an industrial past serve as a reminder of the enduring legacy of the E & N Land Grant—the privatization of land for the sole purpose of resource extraction and individual wealth. It’s a fact of life for Vancouver Islanders south of Campbell River. We live in a place where resource management is a cowboy country of confusing private interests (it’s a stark contrast to the rest of British Columbia, where the majority of natural resources belong to the Crown—or, in other words, us, the citizens).

Although Hancock has every legal right to log the Bevan area, the company hasn’t yet committed to a start date. Daniel Oxland, the Hancock forester responsible for the land in question, says he is sensitive to the growing public interest in the property. He calls it “a fluid situation.”

“We are aware that a local community group has formed for the purpose of potentially purchasing the timber rights for this property,” Oxland says. “While we are prepared to begin operations, Hancock is willing to have a constructive dialogue with the community group and other stakeholder groups to explore alternatives.”

According to Oxland, Hancock’s logging plans for the Bevan trails include leaving a 60-metre tree buffer next to some of the existing trails (double the legally required setback along the Puntledge River) and maintaining the integrity and connectivity of wetlands.

BC Hydro’s hands are tied, according to spokesperson Susie Rieder, despite the crown corporation having invested in the construction and maintenance of trails over the past several decades “as a benefit to the community.”

“If their plans meet our public safety and other requirements, Hancock has a legal right to access their trees,” Rieder says. “We don’t have a fund set aside to purchase the timber rights.”

Burton and Hilliar have the Bevan trails in their short-term sights, but they realize it’s likely the eleventh hour for this chunk of forest. By the time this article is read, the forest could already be gone. All it would take is one person at the controls of a tree harvester for a couple of days.

But they’re also thinking about the bigger picture. They want to draw attention to the reality that, though the forest and trails near the Puntledge River may be one of the Comox Valley’s prime destinations for enjoying nature, the land is far from protected.

“We’re new at this,” Burton says. “But we’re getting a lot of support and attention.”