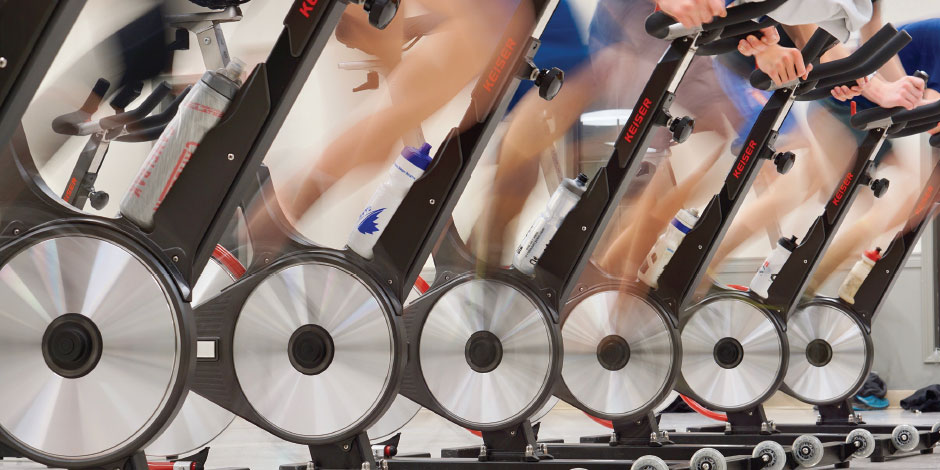 SPIN IT TO WIN IT

When the days grow short and the nights grow long, the foggy village of Cumberland starts to slow down. But in a distant corner of the Cultural Centre, a group of young adults are just starting to gear up.

As a mecca for singletrack mountain biking, Cumberland is generating an extremely skilled generation of youth riders. But as the snow begins to fall, the opportunity to ride during the winter dwindles. A local father saw his son collapse with exhaustion, gasping for air after a spring race, and an idea began to form. Many of the locals have significant skills, but their cycling fitness falls to the wayside over winter. The father approached a local favourite Cumberland Recreation Institute (CRI) fitness instructor, Paul Purin, to see if something could be done to provide more consistent training. With the CRI’s recent purchase of nine spin bikes in 2016, Purin jumped on the opportunity.

Purin has a solid background in biking, but his forte lies in general fitness and ultra marathons. He approached two others to round out the expertise for the sake of the class: Peter Reid, a three-time Ironman World Champion and triathlon hall of famer, and me, a local sports medicine chiropractor and multiple off-road triathlon world championship competitor. Both Reid and I were more than happy to combine our skills and knowledge, feeding off of Purin’s enthusiasm to start the class. “I absolutely love working with kids,” Purin says, “and anyone who is keen to strengthen both the fitness and nutrition aspects of their lives. This program has been something I have wanted to do for a few years and finally came together with Dr. Clay Ward and Peter Reid aligned to support.”

The roles were quickly determined over a pint at the Waverley: Purin would provide the core training and give nutritional advice, Reid would provide additional workouts and monitor their progression, and I would lead the spin class.

The class spanned 10 weeks, with instructors and trainees staying motivated by feeding off each other’s energy. No class was ever easy. In fact, they were brutally hard at times. Suffering in a group made it more tolerable, and even enjoyable. With strategic fitness testing and build and body recovery periods, the kids got fit and fast while staying injury-free and healthy. “It makes training so much more fun,” says one participant. “The people are great to be around, and the atmosphere is super motivating and supportive.”

During the following 2017 bike season these riders, ranging from ages 13 to 16, brought home too many wins, podiums, and provincial and national champion jerseys to mention. By the end of the season five participants in the class were named to the 2018 Cycling BC Cross-Country Mountain Bike Team, compared to only one the previous year. (The class ran again last December through February, and the number of participants increased.)

By no means did the class generate these results. It was the athlete’s own dedication combined with the winter training as one part of the larger network of support from the parents, volunteers, local bike shops, and trail builders who help to create such an amazing bike community.

Please contact the Cumberland Recreation Institute for more information or to register for next winter’s session.