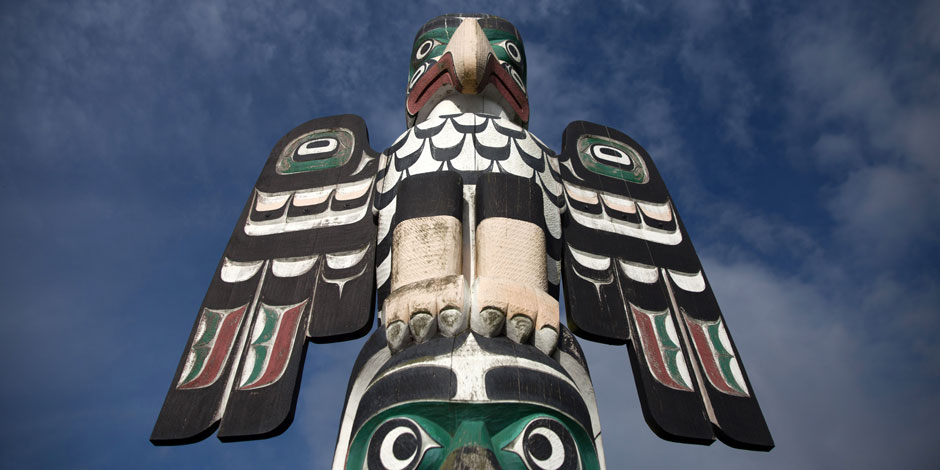 Karver Everson and Randy Frank are resurrecting a style of totem pole carving traditional to the K’ómoks people. Their Guardian poles continue to be raised on unceded traditional territory throughout the Valley in honour of First Nations History and the path we must all walk toward reconciliation.

Driving on Comox Road along the Courtenay River estuary and through the K’ómoks Nation’s Number 1 reserve, it’s hard not to be struck by the stunning new Band administration building constructed there in 2014. The two magnificent poles that grace its front reflect the four clans of K’ómoks today, which are Pentlach, Sahtloot, Ieksun and Sasitla. They were carved by Karver Everson and Randy Frank under the tutelage of master Kwakwaka’wakw carver, Calvin Hunt. They mark the beginning of the Guardian Pole Project. It has a mandate of erecting two poles per year for ten years. Since 2014, poles have been erected on reserve lands on Goose Spit, the Salmon River, the Puntledge reserve, and at the cemetery on the Number One reserve. On March 24, 2018, a pole was erected in Helliwell Park on Hornby Island, and another on Denman Island.

The Guardian Pole Project is the brainchild of Hereditary Chief Rob Everson of the Gigalgam Walas Kwaguł who, in 2014, was also the elected band chief of the K’ómoks First Nation. The new chief and council have pledged to carry on with the raising of new totem poles throughout the unceded territory on the K’ómoks First Nation as a means of creating a stronger sense of unity and pride for the K’ómoks people. As Andy Everson wrote in 2000, “Revitalization of traditional practices and beliefs can be seen as a means of creating group cohesion within and across tribal boundaries to the point that groups are able to transcend economic and societal hardships.” Not only are Guardian poles markers of unceded K’ómoks traditional territory, they also exemplify the stories and belief systems that have been in place since time immemorial. They aim to uplift the spirits of the K’ómoks people and are also a means of educating non-indigenous people about K’ómoks traditions and values.

Karver Everson, who carved the Hornby Island pole and participated in the carving of several others, notes on his website that:

When I grab a piece of western red cedar and start carving it no different than my ancestors did before me, it is something special. It connects me to a time in history that was once magical and portrayed a pure connection to earth. Although my culture is still here and thriving, its existence is threatened by the rapidly changing world. Through my art I attempt to connect both the present with the past and further understand my place within time and cultural history, in doing so shining light on an ancient world that once was.

That connection to his ancestors is something that is currently being revitalized by the K’ómoks band after decades of disconnection from the past brought about by colonialism, discrimination and prejudice. The Indian Act of 1876 regulated all aspects of indigenous life. Pass laws required band members to ask permission of the Indian Agent to leave the reserve. The Potlatch and other ceremonies were banned from 1884 to 1951. In a speech reported in the Globe and Mail on May 28, 2015, Chief Justice Beverley McLachlin referred to Canada’s treatment of its aboriginal people as a “cultural genocide” that began in the colonial period.

Through the decades when the federal government did everything it could to eliminate indigenous peoples so colonists could take over their land and make it “productive”, the K’ómoks proved resilient. People found ways around the potlatch ban and other prohibitions, and as Andy Everson notes they sometimes organized living room potlatches. Poles, however, could not be raised without drawing negative attention from the authorities so none were raised for decades. After the potlatch ban was lifted in 1951 Mungo Martin organized the first legal potlatch, built a big house and raised a pole in Victoria at the Royal British Columbia Museum. Between then and now, poles have been raised here and there in the Valley including two at the Lewis Park entrance, one commissioned by the Town of Comox for their traffic roundabout, and one at North Island College commissioned by Gordon and Ivy Wagner, among others. But as Andy Everson noted at the pole raising on Hornby Island, Guardian poles are different:

Karver and Randy are the first ones in generations of K’ómoks people that have carved this style of pole. This is the traditional style that was found throughout our territory. There are numerous examples of this in museums in different parts of the world including New York City, London England, and Victoria BC. But our people haven’t raised this style of pole until these two started carving these again.

…it’s not just up to indigenous people to find a path to reconciliation and walk it with humility and respect and sincerity in meaning. To find that path I think we begin by listening, learning and understanding your traditions, your culture, your knowledge, your rights, your experience, your history, your values, and your vision… And now we have this presence, your presence, on this island to remind us whose land we’re on, to give us a chance to reflect on the past and to make a commitment to the present to work towards justice and good relationships so we can be friends and neighbours as K’ómoks flourishes in this land of plenty.

No finer or more appropriate words were spoken. Karver Everson and Randy Frank are now finishing work on two poles to be raised at the Comox Valley Art Gallery. After that they will move back to the Big House to start work on two more Guardian poles, to be raised at the Courtenay Air Park and Mount Washington. Their work will enrich and grace the Valley for decades to come as symbols of pride for the K’ómoks people and as reminders for us of the commitment we must all make to reconciliation. 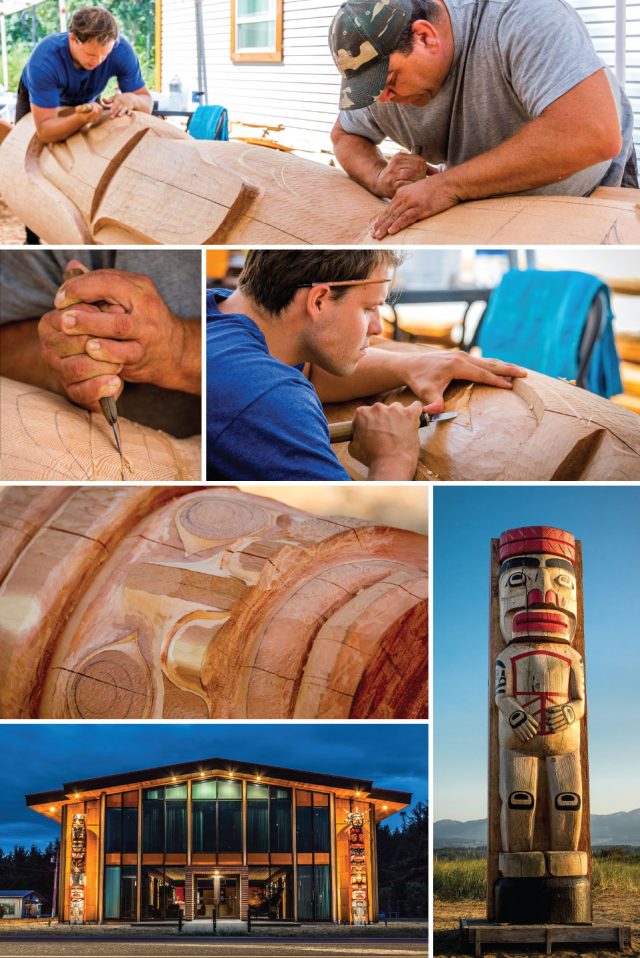