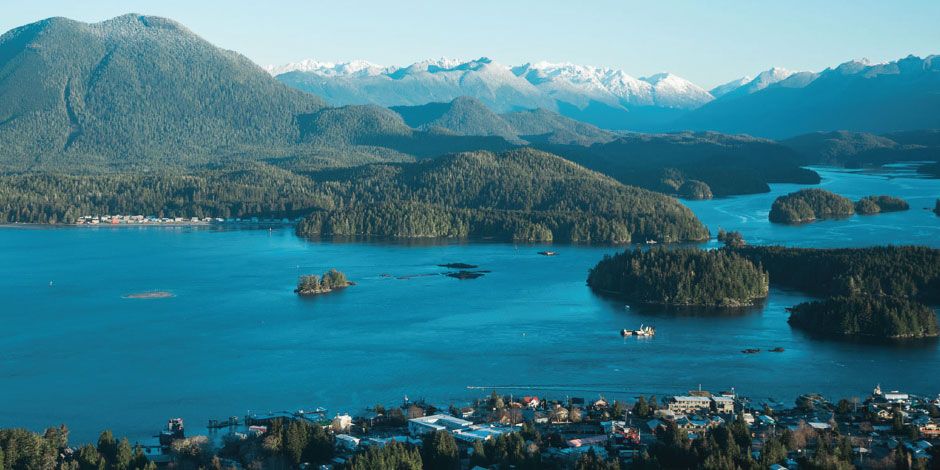 In the small coastal towns of BC, long-time locals are often suspicious of newcomers. Yet when former professional hockey player and two-time Stanley Cup Champion Willie Mitchell explains why he chose Tofino, it’s with as much passion as anyone is likely to muster. His love for this remote peninsula
on the west coast of Vancouver Island came before any business venture. “At Rosie [Bay] there is very little cell service, so my wife gets me all to herself,” the new father tells me over cocktails at Wolf and the Fog. “We can detach from our phones and the rest of the world when we’re here. I want my kids to grow up experiencing this place like I have.”

Mitchell is President and partner of Tofino Resort + Marina. Formerly the Marina West Motel, it’s been fully revamped, including a rigorous renovation resulting in The Hatch Pub and 1909 Kitchen. The property consists of two separate buildings that house the guest rooms, and waterfront dining rooms with patios
extending beyond the water’s edge. There is also an adventure centre that aims to push the experience of visitors beyond Tofino’s shores and into the rugged wild of Clayoquot Sound.

Both the restaurant and pub are open and slick, with exposed beams and iron finishes that lend to a west coast-industrial vibe. Despite these modern touches, the spaces, separated only by a small entranceway, are warm, welcoming, and difficult to leave. In an era of teardown and rebuild acquisitions, there are trademark similarities remaining, like the large port windows that span the entire length of the restaurant. A massive wood-fired pizza oven warms 1909 from behind the bar. Chef Paul Moran’s menu includes freshly foraged seafood as well as casual favorites. Servers pour pints of craft brew and Lucky Lager, a small detail that seems representative of an appreciation for Vancouver Island’s peculiar nuances.

At the heart of it all, and present throughout every aspect of the redesign, is the marina. Mitchell, who grew up working the commercial docks in his hometown of Port McNeil, laughs loudly and easily. He has an appreciation for things that come together naturally, and for people with whom he shares a history. He is both humble and proud of his accomplishments, describing a storied NHL career as “chasing a piece of rubber for a living,” but shares with delight his experiences of touring with the Stanley Cup and seeing how nostalgic hockey fans connect with the icon.

His last NHL game was during the Florida Panthers 2015-2016 season, and the resort’s grand opening was in July. Becoming a hands-on partner and director of a resort and marina in a remote town with a year-round population of fewer than 2,000 residents is neither the obvious choice nor the path of least resistance.

However, to a man who seems interested in how people are drawn together to make ideas converge, it makes perfect sense. “When I got the call that this place was available,” he says, “I thought, ‘That sounds like a lot of work.’ But my wife went to culinary school. We love food. We love it here. We love to host and bring people together…so hospitality makes sense.”

I eat breakfast at the far end of the long and narrow space of 1909 (named for the year Tofino got a post office). A heron glides by the window, and a pair of kingfishers dart after one another around the marina’s piers. Gumbooted fisherman load moored boats. Eagles are perched high in the trees across the inlet, and seals rise and submerge between coffee refills.

It’s these waters—Clayoquot and beyond—that call to Mitchell the clearest. A life-long fisherman, he sees the waters beyond Tofino’s beaches as their greatest asset. Whether it’s fishing 120 km offshore for tuna, fly-fishing in the freshwater rivers, or volunteering with the local hatcheries, he’s happier on the water than anywhere else.

“I’m not joking when I say I’m more comfortable on a boat or in waders than I am at the rink,” Mitchell says. “The watershed around Tofino is a gift. Not just to me, but to everyone who gets to experience this place. I want to work to protect it, and I want to show it off.”

It’s not hard to see why people want to be a part of what Mitchell does, and Tofino Resort + Marina is the most recent incarnation of this reach. From Rosie Bay to the Tranquil River to the peak of Lone Cone, the former defenceman has found a new home to look after. 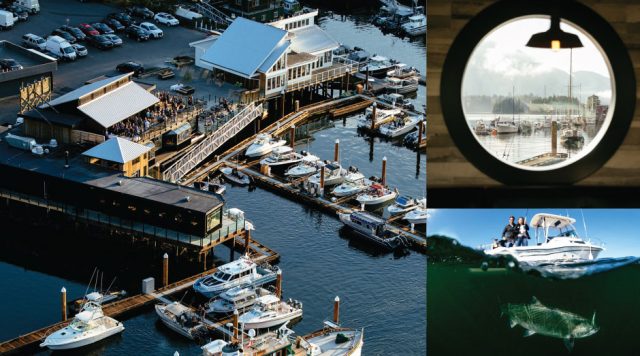