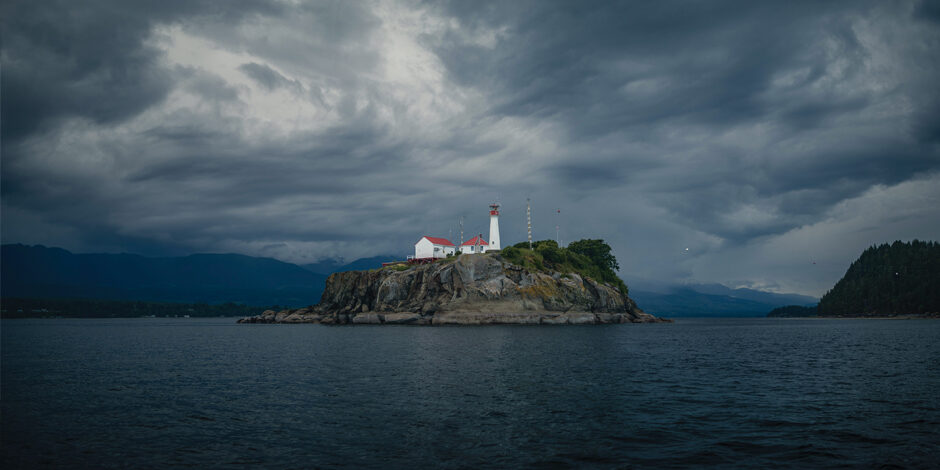 STORM, SPIRITS, AND ISOLATION: LIFE ON THE LIGHTS

Few manmade structures have the universal allure of the lighthouse. We are drawn to them, as much for their profile as for their sense of mystery and place in history. We photograph them in all weather, seasons, and angles of the sun. We wonder what the lightkeeper’s life is like.

Norbert “Norbie” Brand, 71, has been a lightkeeper on British Columbia (BC)’s coast for more than four decades. His career has weathered storms, spirits, isolation, and the march of progress that has replaced some provincial lightkeepers with automated light stations.

Although Norbie officially retired in 2010, he has been called to do relief work about 15 times since then, most recently at the Cape Mudge lighthouse on Quadra Island. Established in 1898 and rebuilt in 1916, it is one of only 27 manned lighthouses left on Canada’s Pacific coasts, while 16 other stations operate unstaffed as aids to navigation.

Compared to most lighthouse posts, which are accessible only by boat or air, Cape Mudge is only a 10-minute ferry ride from Campbell River, so Norbie is able to bring his car and easily pick up any supplies he needs.

But during the 33 years he was the lightkeeper at Cape Beale, on the western edge of Pacific Rim National Park in Huu-ay-aht First Nation, groceries and supplies were delivered to him once a month. “You have to ration. Every month when that delivery comes, it’s like Christmas!”

Lightkeepers work seven days a week, so all the regular activities city people take for granted—doctor and dentist appointments, renewing driver’s licenses, visiting family, shopping, and other errands—are packed into vacation time. The rest of the time, the only people they see are their immediate family, and in remote locations like Cape Beale, one other lightkeeper and their family.

That kind of isolation takes a certain kind of personality. “It’s not for everybody,” says Norbie. “I found it wonderful because I am content with myself. I tell new lightkeeper couples to give it a year, and only stay if they both love it.”

Norbie’s wife of 28 years, Kathi, agrees. “If you don’t like who you are to begin with, you’re not going to like it there. I will say there is nothing romantic about the lifestyle. It’s hard work.”

“Lightkeeper wives and children are basically indentured servants,” she jokes. “I was so green when I went to the lights in the early ’90s. Late at night, I used to listen to the other lightkeeper wives talking to each other on the ALN circuit [an open VHF radio line]. I learned a lot that way. We are as much a part of the station as the lightkeeper. We’re always ready to help—hold a ladder, do a weather report, paint the railings.”

The work of a lightkeeper has changed over the past century and a half. Originally, kerosene lamps lit the towers, lenses had to be polished regularly to remove soot buildup, and the light’s rotation mechanism had to be hand-wound daily. When the lights transitioned to electric lanterns powered by diesel engines, engine maintenance became part of the job. By the 1970s, the Coast Guard began replacing the engines completely, and maintenance was done onshore by specialists.

“Being a lightkeeper is kind of like being a farmer,” says Norbie. “You have to be self-motivated and self-sufficient.”

A typical day at the Cape Mudge lighthouse might consist of checking the engines, wiping down the lantern, painting railings, or cutting the grass. Everything has a specific procedure to follow and is carefully tracked in a logbook. Norbie provides weather reports to Environment and Climate Change Canada every three hours, from 7:40 a.m. to 4:40 p.m. More remote stations with two lightkeepers working in two shifts cover the hours from 3:40 a.m. to 7:40 p.m.

“Marine and air traffic depend on these weather reports. Lightkeepers have been reporting for 150 years and climatologists rely on this data showing trends over time.”

Weather is the single most impactful aspect of lighthouse life. Norbie was working the Cape Beale lighthouse during the devastating 2006 windstorm that hit BC’s South Coast and ripped thousands of trees out of Stanley Park.

“The big storm that flattened Stanley Park? It hit Cape Beale first. Gusts were up to 110 knots. Big spruce trees were flying off the cliffs. The sea looked like the inside of a washing machine—just white and wild. And the sound! It was like being in a big train station and super-trains were barrelling right by you.”

He finds nature’s power is matched by its magnificence.

“The beauty of the West Coast is indescribable. It can bring me to tears. It is my greatest satisfaction to be by myself in Mother Nature. I’ve walked through forests where I might have been the first white person to walk there. I feel very privileged.”

“Most lightkeepers I know are artistic,” Norbie says. “The creativity is in them. And they have the time and the patience and beautiful surroundings.”

Kathi creates through quilting and stitchery, while Norbie’s art form is driftwood Santa Claus and St. Nicholas figures. More than 150 of his carved and painted creations reside in homes around the world.

The Brands have also experienced the supernatural, from disappearing kitchen utensils to apparitions. “I personally feel that most light stations are haunted,” says Norbie. “Most are on Indigenous lands and the ghosts of the Aboriginals walk there.”

At Cape Beale, Norbie often saw The Blue Hiker. “Sometimes I saw a man in blue jeans with a backpack walk by the kitchen window. But when I went out, there was no one. I didn’t tell my wife about it.”

But Kathi says she, too, saw flashes of blue outside the window, and would go out, only to find no one there. “I felt that I never walked alone—with all the of coastal tragedies and the area’s connection to First Nations. One time a local Elder visited us at Cape Beale, and I told her that sometimes I smelled campfire or pipe smoke. She said, ‘That could be my grandfather.’”

Recently on Quadra Island, Norbie’s potato peeler went missing and he wonders about a spirit prankster. The Cape Mudge lighthouse is located alongside the We Wai Kai First Nation reserve. While this has been Kwakwak’awakw territory since the 19th century, the area used to be the home of the Coast Salish people; their village—located where the current Tsa-Kwa-Luten lodge (owned by the We Wai Kai) is—was the site of the first recorded contact in this region between Europeans and First Nations, by Captain George Vancouver, in 1792, and evidence of ancient people living on Quadra Island 3500 to 2500 years ago exists in the form of nearly 100 boulders carved with petroglyphs at 11 different sites.

Further south, in Baynes Sound, the Chrome Island lighthouse also has ancient carvings on its sandstone shores. In 2000, the island was named a protected archaeological site to preserve the petroglyphs, shell middens, and human bones found there. It is one of the few remaining manned lighthouses off the eastern coast of Vancouver Island and though not accessible to the public, paddlers can view it from the water, and hikers get an aerial view from Boyle Point Provincial Park on Denman Island.

Many decommissioned Canadian lighthouses have been designated under the Heritage Lighthouse Protection Act to preserve and recognize the importance of these historic structures for future generations. The stories of lightkeepers like the Brands give us a glimpse into a disappearing lifestyle. 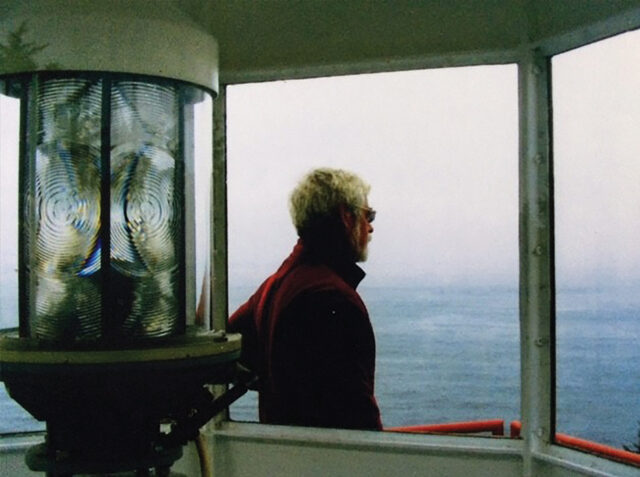