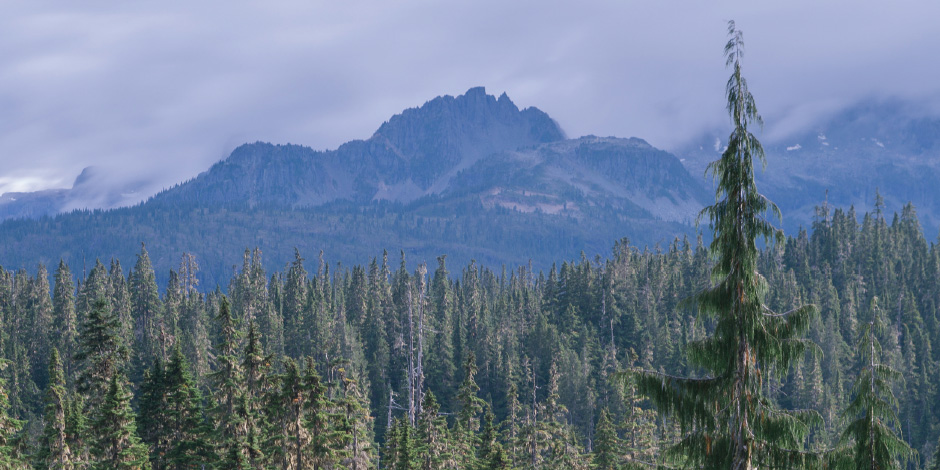 Getting by with a little help from our friends.

The map of British Columbia is festooned with splotches of green, and we’ve got the granddaddy of them all—2500sq km Strathcona Provincial Park—in our backyard. This wild piece of mountain topography symbolizes on one hand, the richness of our parks system, but on the other the commercial-minded interests that gave birth to Canada’s conservation movement and also governments’ somewhat checkered commitment to parks over the years.

Like a lot of geographical features that were named after European contact in North America, Strathcona park gets its handle from a wealthy white guy with no specific connection to the place; in this case, philanthropist and railway magnate Donald Smith, the 1st Baron of Strathcona and Mount Royal, who was a key figure behind the building of the Canadian Pacific Railway. It makes about as much sense as me perusing a map of Nunavut for an unnamed waterbody and calling it Lake Andrew Findlay. Perhaps Strathcona was so named in hopes of channeling some of the CPR’s enterprising spirit. In 1885, Smith and his railway cronies collaborated with the federal government to create Banff National Park, the country’s first national park. Nature conservation was a secondary consideration. Railway execs saw a potential tourism cash cow in the majestic mountains that surrounded the hot springs, “discovered” by railway workers, bubbling from the lower slopes of Sulphur Mountain (of course, local First Nations knew about the springs long before the arrival of the CPR). They were right. The creation of Banff National Park, at first a small reserve around the hot springs, heralded the dawn of a lucrative mountain tourism boom that attracted train loads of visitors during the golden age of rail travel—a boom that continues unabated today.

Fast forward a decade or so. In July 1910, Price Ellison, a provincial cabinet minister from the Okanagan Valley, set off with his young daughter Myra, some university students, a field scientist, a hunting outfitter, and three native Cowichan packers to assess Vancouver Island’s rugged interior for park potential. Though nature conservation motivated the expedition, Ellison also had grandiose visions of replicating some of the dizzying tourism success of Banff, with paddle wheelers on Buttle Lake shuttling passengers to luxury hotels in mountain valleys. The scenery sold Ellison. The park was established the following year in 1911 and is the genesis of a system that has since expanded to 1,000 protected areas covering 13.5 million hectares—the largest provincial park system in Canada. As Vancouver Sun journalist Stephen Hume wisely noted in one of his columns on the 100th anniversary of B.C. Parks, back when the province seemed like nothing but wilderness, it required unusual foresight to save some of it as a park; equally as prescient as a 19th century Fraser River fisherman championing salmon conservation at a time when the resource would have appeared inexhaustible. Thankfully, the sheer remoteness and ruggedness of Vancouver Island sunk dreams of a luxury tourism trade in Strathcona. Anyone who has watched busloads of tourists waddling down Banff Avenue on a summer afternoon buying overpriced ice cream cones, boxes of fudge, and “I Love Banff” t-shirts, will know what I mean when I say “thankfully”. The fact that we have a Class A provincial park on our doorstep where it’s possible to day trip and have a wild mountain experience without seeing another soul is a blessing. But it’s also easy to take it for granted. Class A is meant to be the gold standard of protection in B.C.’s provincial park system, dedicated to the preservation of “natural environments for the inspiration, use, and enjoyment of the public,” as defined by the ministry of environment. Furthermore, mining, hydroelectric development, and commercial logging are meant to be prohibited. Turns out the gold standard of preservation in B.C. is not as rock solid as it appears on paper. If, when it was created, Strathcona was meant to be a cathedral of conservation, cracks started appearing before the mortar had dried; the province’s flagship park has in many ways been under attack almost since its very founding.

First, it was mining interests eroding the park boundaries, followed by logging in the 1930s and 40s. The 1950s brought hydro-electricity development within the park to feed the pulp and paper mill in Campbell River. In the mid 1960s, the province permitted Western Mine Ltd to develop copper and zinc claims near Myra Falls at the end of Buttle Lake, setting a new low for conservation in a Class A park. In the mid 1980s, the Friends of Strathcona Park [FOSP] narrowly averted a plan to downgrade parts of the park and once again allow mining expansion. And the most recent fight was over the granting of a special park use permit tenure for Clayoquot Wilderness Resort, a $1000 per night, plus, lodge that wanted to develop trails and camping infrastructure to enable horseback tours in Bedwell Valley for its high-end guests. FOSP won this battle as well. On the surface one might wonder what the big deal is about some privately built horse trails and huts in a provincial park. But critics say—and I agree—allowing private development in provincial parks undermines the notion of accessibility, equal to one and all, and only serves to justify future cuts to park budgets as government outsources park management to the private sector. Even the shrewdest of bean counters would recognize provincial parks as a slam dunk investment; numerous studies have shown that for every public dollar put into the parks system for the hiring of rangers, installing new outhouses, maintaining campgrounds and trails, and in general shoring up infrastructure and services, many more dollars are generated for the province in terms of tourist expenditures. Turns out, people who visit parks gas up, sip craft beer, eat burgers, and buy groceries in adjacent communities. To put things further into perspective, in 2015, B.C. Parks’ annual operating budget was $31 million; the City of Vancouver’s budget for parks and recreation this year is around $118 million. This begs the question—are we bankrupting the very thing upon which B.C. built its “Super, Natural” tourism marketing juggernaut? FOSP treats Strathcona as something sacred because you can’t undo mines and hydroelectric reservoirs. Whenever policies are developed and implemented in Strathcona, they tend to set the norm for the entire parks system. In the early 1980s, a government appointed committee lamented the state of the park in a strongly worded report, noting that Strathcona “now embraces a reservoir that was once a lake, logged-over forest land that has not been replanted, a number of mineral claims, and an operating mine, a power line right-of-way, and a boundary that defies park principles…” The report went on to conclude that the “…Park is, in a word, a mess.”

The price of progress? If so, then it’s a major blow to the intention of a Class A park. But, on a more optimistic note, we still have the park. Chances are no modern government or politician would have the temerity to carve off another chunk of Strathcona for industrial purposes as was done in the past, and thankfully we have tenacious citizen watchdogs at FOSP to hold government feet to the fire when necessary. And though conservation battles have defined Strathcona’s history, you can still wander up a valley like the one drained by Cervus Creek, follow the trails of Roosevelt elk, camp in an old growth forest of Douglas fir, cedar, and hemlock beneath the north face of Elkhorn Mountain, and likely feel the same sense of wonder that Price Ellison and his party of explorers would have known more than a century ago.