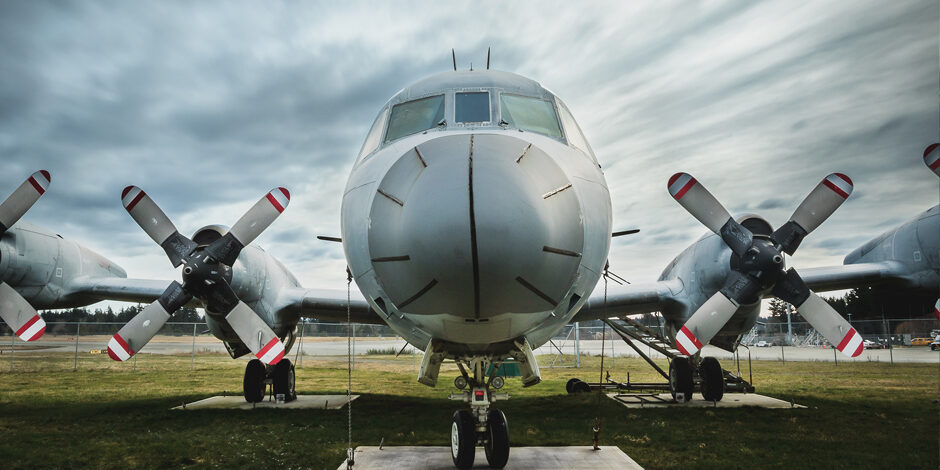 Editor’s note: Rick Zyvitski, now retired, used to fly fighter jets out of Canadian Forces Base (CFB) Comox. We invited him to share some of his experiences in the air and walk our readers through the museum.

The Comox Air Force Museum is a wonderful facility that brings the history of the base to life. It offers a treasure trove of data, pictures, hardware, and a library for your viewing pleasure; there’s a great little gift shop as well. It’s not just for military buffs—everyone interested in the history of our valley should pay the museum a visit. You’re sure to learn some amazing things.

My time at 19 Wing Comox started in October 1976 when I was assigned to 409 All Weather Fighter Squadron. Some folks will remember the mighty CF-101 Voodoo supersonic jet fighter the squadron flew. It was easily recognizable by the dynamic “Boom Boom” it emitted on take-off. It was designed for quick climbs to altitude and fast dashes approaching two times the speed of sound. It had two J-57 engines that, when placed at full throttle, caused a rather large explosion in each motor, resulting in eye-watering acceleration—and instant recognition of the sound of this aircraft for years to come.

The mandate of 409 Squadron was to defend our sector against Soviet bombers for North American Air Defence Command (NORAD). This sector was huge—some 300 nautical miles (nms) west out over the Pacific Ocean and thousands of nms north. Our crews (pilot and navigator) flew approximately 350 hours per year, honing our skills to ensure no Soviet bomber would get through on our watch.

Although we never encountered any Soviet bombers in the western Voodoo era, the Cold War continued with CF-18 crews on guard where frequent engagements occurred. These engagements are happening even more in the present day, with the ambitious agenda of the Russian Putin administration largely playing out in the Inuvik area of the Northwest Territories.

Long-time Comox residents may recall protests outside the gates of CFB Comox regarding one of the weapons the Voodoo carried: nuclear Air-2A “Genie” rockets (admittedly not everyone’s cup of tea) with an amazing kill capacity). This weapon, which is on display at the museum (without the warhead), was so effective that the launching aircraft had a chance of taking itself out, too. Approximately 50 of these weapons were stored in a secure area under USAF control for use if required. Fortunately, we never had to use them, but I did get to fire the inert version (no warhead) five times on various exercises. For those folks with some anxiety about nuclear weapons, I can assure you that the Genies are long gone from 19 Wing today.

The CF-101 Voodoo served until 1984, when 409 Squadron began flying CF-18 Hornets and was moved to CFB Baden, Germany. After that, NORAD duties were jointly held (on a part-time basis) at CFB Comox by 416 and 441 Squadrons on temporary duty out of Cold Lake, Alberta.

My career took me to various other postings, and during my time as Deputy Commanding Officer of 441 Squadron, I returned to 19 Wing on numerous occasions. On these deployments, we would bring two aircraft to hold “quick reaction alert” (meaning airborne in five minutes) for possible Russian penetrations in our area. We also flew at least two training missions per day to practise our skills. As it turned out, most scramble orders, even then, were north to intercept Russian aircraft just east of Alaska.

One of the Voodoos I had the honour of flying sits atop a pedestal at the present-day entrance to 19 Wing Comox; you’ll see it as you approach the museum. In 2020, it was refurbished in Hawk One colours based on an artist’s rendition of a ferocious Night Hawk—the squadron’s namesake.

At the Heritage Air Park located just north of the civilian air terminal, you can get up close and personal with many of the aircraft flown out of 19 Wing over the years. You’ll find an Argus and Aurora used in anti-submarine warfare (ASW); a Buffalo and Labrador used for search and rescue (SAR); and a CF-100 “Clunk” and CF-101 Voodoo employed in air defence, to name a few.

Inside the museum itself, you’ll find fascinating displays about the Hornet, along with extensive mock-ups of the weapons and systems of a number of other aircraft that have been used over the years in Comox and elsewhere.

When I recently visited, I particularly enjoyed the special exhibit about Canadians in action on the Aleutian Islands during the Second World War. I have a personal connection to this so-called “forgotten battle”: my wife’s father served on the Aleutian Islands as a radio technician on the Kittyhawk fighter aircraft before his squadron headed overseas.

The museum has a good section about 442 Squadron, to which I have another deeply personal connection. On 12 August 2012, my eventual daughter-in law was flying in a small private plane from Penticton to Boundary Bay. The aircraft crashed not long after take-off. At that exact moment, a Buffalo aircraft from 442 Squadron was overhead, heading home from an exercise. Upon hearing the emergency locator beacon (ELT), two SAR Techs jumped into the crash site to give life-saving emergency medical treatment. Our family is all extremely thankful to the brave men and women from 442 Squadron.

Things have changed significantly at 19 Wing over the years from a modernization perspective, but the mandate remains largely the same with very dedicated men and women carrying out ASW and SAR—and support for these missions—on an almost daily basis. Other missions include surveillance regarding illegal migration, drugs, fishing, and pollution. NORAD missions still occur, too, but on a much more limited basis. In addition to the Wing’s operational squadrons, it’s also home to 19 Air Maintenance Squadron and the Canadian Forces School of Search and Rescue.

The museum is staffed by knowledgeable and friendly volunteers, it’s child-friendly, and it’s affordable: the entrance fee is by donation. Be sure to pay it a visit. It’s an excellent way to learn about (or relive) some of the incredible history of West Coast aviation.