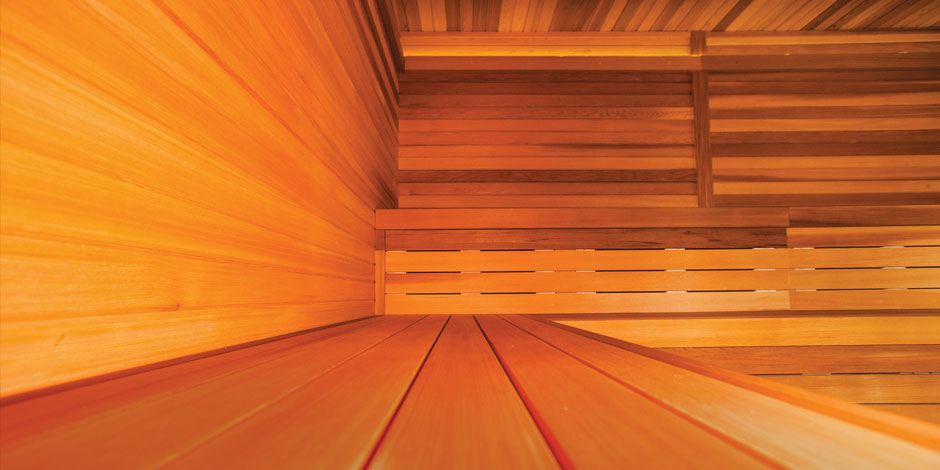 Bathing in the benefits of hot-cold rituals.

True story: my first-ever sauna experience included pitchers of gin Caesars and a waterslide—a really steep one. Thinking back, I can feel the heat sinking into my bones, the sweat beading on my skin, and the coolness of the night air as I slipped into the refreshing embrace of Lake of the Woods. At the time, I had no idea that this twenty-something summertime fun was good for you… well, it would be, without all the alcohol.

Getting hot and steamy isn’t new. It’s an OG practice that dates back thousands of years and crosses many cultures. Indigenous sweat lodges, Finnish saunas, Russian and Ukrainian banyas, Turkish hammams, and Japanese sento are all variations in which people enjoy a good cleansing, purification, and restoration. There’s something special about taking deep breaths in a cozy lair, letting the mind float, and emerging with a glorious glow.

Recently, I found myself on the receiving end of a gracious invite to partake in some heat-bathing at a The Lost Faucet. I didn’t think twice before accepting.

After three sessions of heat-cool-rest, I felt deliriously relaxed, rested, and rejuvenated. The sauna worked its magic on my overloaded mind and tension-filled body; the refreshing cold-water rinse jolted me back into a cooler state before rest and hydration between sauna sessions. The entire event was euphoric. My body felt like it had just been through an intense workout—endorphins were pumping through me as I made my way home. It took a while for that post-sauna bliss to wear off, and I had the best sleep I’d had in months.

A few days later, I began sifting through the experience and information gathered from my insightful, seasoned host. I started digging around the internet, and—not to my surprise—found that there’s a lot more to sweating it out than just lounging on the top bench, steaming my cares away. In fact, the health benefits really stack up.

Of course, a sauna may not be suitable for everyone. Those with underlying health conditions and/or who are pregnant should seek medical advice first, and consuming alcohol before or during sauna sessions can be dangerous. (Now, that’s something I wish I’d known when I was young and dumb.)

Over the years, I’ve found myself seeking the heat of a steam to soothe sore, achy muscles after lengthy workouts, sometimes after a swim at the YMCA, and even once at a wedding reception over on Hornby Island, testing how many bodies would fit into the small sauna and who’d last the longest before dashing into the ocean. Despite the intrigue and enjoyment, somehow, I’ve never become a full-fledged sauna-goer… until now.

My desire to spend more time in the sauna is strong. Perhaps I’ll see you there.