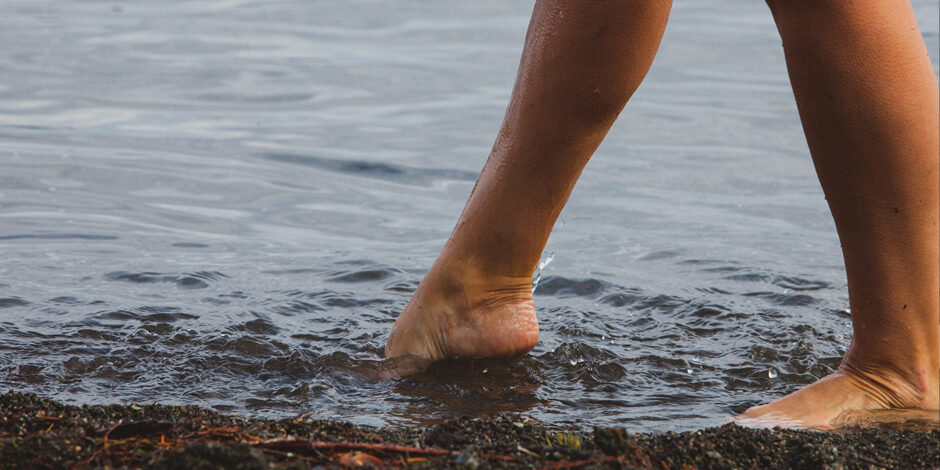 A pledge to jump into Comox Lake once a month for a year.

On January 1, 2019, a large group of adventurous Cumberland residents gathered on the shores of Comox Lake. Celebrating the New Year, we were there to jump into the frigid water. The first-ever recorded “Polar Bear Dip” took place in Boston in 1904, and the tradition has since spread throughout Canada, the United States, and many other parts of the world.

I was at the lake that morning, as were sisters Brianna Lawrance and Sarah Jane Howe. Just before noon, the lively crowd began to disrobe, stripping down to bathing suits. We stood anxiously on the gravelly shoreline as someone began the countdown from ten.

Hitting the skull-numbing water sent a jolt through my body, and the sensation of a thousand tiny needles being stabbed into the bottoms of my bare feet overcame me.

The dip does not take long. No one typically stays in longer than a couple of minutes—just enough time to fully submerge before clambering onto dry land.

Later that afternoon, in the warmth of my home, I received a text from Brianna. “That was so much fun,” she wrote, “I cannot wait to do it again next year!”

I immediately replied, “Why wait? Let’s do it the first of every month!”

Brianna, always up for a challenge, quickly shot back, “I’m in!”

And so it began.

It didn’t take much to convince Sarah to join us. Our goal: to plunge into the glacial waters of Comox Lake on the first day of every month throughout 2019. It sounds a bit kooky, and perhaps it was, but it seemed like a great way to help us keep focused and mindful throughout the year.

The three of us would meet at the Cumberland Lake Park parking lot, whether it was snowing, raining, or sunny. With Sarah and Brianna in their housecoats and slippers, and me in my bulky coat, sweatpants, and winter boots, we would trudge past the registration office and the boarded-up concession stand onto the deserted beach just south of the main campground. Cooper and Lola, Brianna and Sarah’s dogs, always came with us. Running around excitedly, they would trample the freshly laundered towels we’d laid out for our return from the icy water.

Standing apprehensively on the shoreline, one of us would begin the countdown to propel us forward. The only way to get in was fast and furious, with the three of us charging into the water—with screams I am sure carried across the lake to the Fish and Game Club.

March 1 was particularly memorable. On that wintry morning, the three of us stood on the snow-covered beach, with ice crystals forming around the water’s edge, questioning our sanity. As we entered the water, it felt as though the blood in my veins froze, and, upon full submersion, I gasped in panic as my breath left me momentarily. I could barely take it as the piercing cold overwhelmed my entire body.

On the way back to our cars, proud to check another month off the calendar, one of us would invariably promise, “It will be warmer next time!” And of course, when the summer arrived, we had a short reprieve from the freezing temperatures. But sure enough, it wasn’t long before the cold set in again, and we had to endure several more polar-like experiences.

Ultimately, our year-long challenge was an exercise in commitment, and we stayed focused and true throughout the year. However, sitting here today, as I plunk away on my keyboard, I ponder if we would ever commit to another year of Comox Lake plunges. Perhaps one might have to twist three hesitant arms—or maybe not!