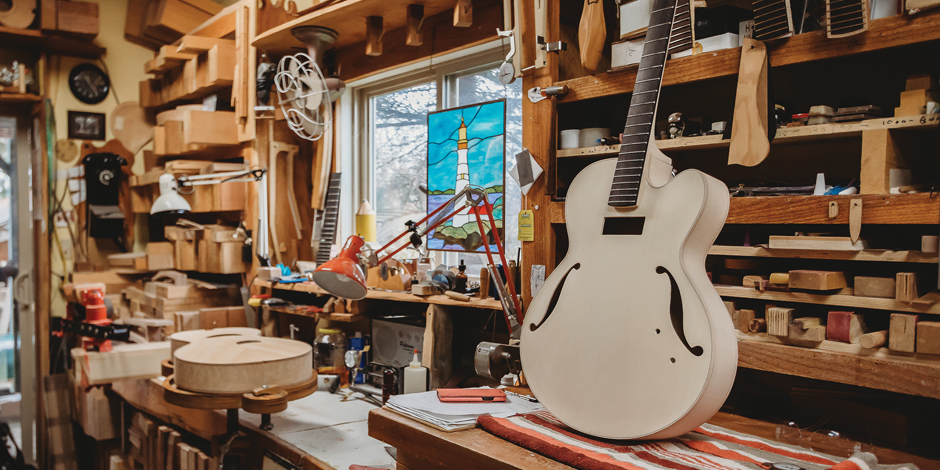 THE ART OF THE ARCHTOP

At the pinnacle of guitar making, you might just find Comox Valley luthier Wyatt Wilkie.

Musical wizardry is something I’ve always admired, and after meeting Comox Valley luthier (guitar maker) Wyatt Wilkie, I now understand that the magic of music begins long before any musician plays a single note.

In the case of an archtop guitar—Wilkie’s specialty—it begins when an artisan looks at a slab of spruce and sees the polished, curved instrument within, then patiently, painstakingly, makes it emerge. By carving it. Using hand tools.

Same with the back of the guitar, which starts as a one-inch-thick piece of maple and needs to be reduced to the ideal thickness and flexibility to create a beautiful sound, and with the neck, which is also hand carved. And then there are numerous rounds of sanding and varnishing before the entire instrument is finally assembled. “It’s very physical work,” says Wilkie. It takes a long time before it’s ready to ship to its new owner.

An archtop isn’t the kind of guitar you pull out around the campfire; it has a different tone and it’s mainly used for jazz music. It’s hollow like an acoustic guitar, but has no round sound hole in its centre —instead it has f-shaped holes like you would see on a violin or cello. And, as its name implies, its top is rounded, not flat.

Wilkie explains that archtops (first invented in the 1890s) evolved as recording technology improved in the early to mid-20th century; banjos were suddenly too loud, but there was still a need for a rhythm/percussive instrument with a sound that would cut through all the wind instruments. Enter the archtop, which Wilkie evocatively describes as creating sound pulses “like smoke rings” (kids, ask your parents). To experience the sound, look up Wilkie’s longtime client Ed Cherry, who played guitar for Dizzy Gillespie for decades and for whom Wilkie has made several guitars.

Making a guitar is a labour of love, more art than science. Long before Wilkie picks up his hand tools, he talks with the musician who will ultimately play the instrument he’s about to make. He learns the person’s style, how they handle their guitars, and the kind of sound they want to produce. This helps him create an intensely personal instrument for each musician.

Wilkie first tried his hand at instrument-making in his 20s, after a stint working in a Calgary workshop that made bespoke guitar cases for the likes of Sting, Paul Simon, and Emmylou Harris. It was a guitar-sized mandolin called a mandocello. “It was terrible,” laughs Wilkie. He still has it, but says he’s planning to turn it into a bird feeder.

But he kept on making mandolins, and after eight years, he landed an apprenticeship with Bob Benedetto, a revered maker of archtop guitars. Wilkie was only the third apprentice the master had taken on in a 40-year career, and he acknowledges that the experience was invaluable: “While I was working for Bob, I was able to make guitars for some of the best musicians in history.” He reckons he made about 70 guitars for Benedetto in his Savannah, Georgia shop in just a few short years before deciding to return to Vancouver Island, where he was born, and set up his own shop.

Now, he spends his days making mandolins and guitars (he makes about eight archtops a year), and occasionally teaching intensive two-week guitar-making workshops to select students. He clearly finds it satisfying to be able to share his unique expertise in this “extremely difficult instrument to make.” And just as clearly, he loves his work: every time he tries to take time off, he says, he ends up back in the workshop.

“I’ve been doing this for 20 years,” he reflects, “and I have this strange feeling that I’m just getting started.”