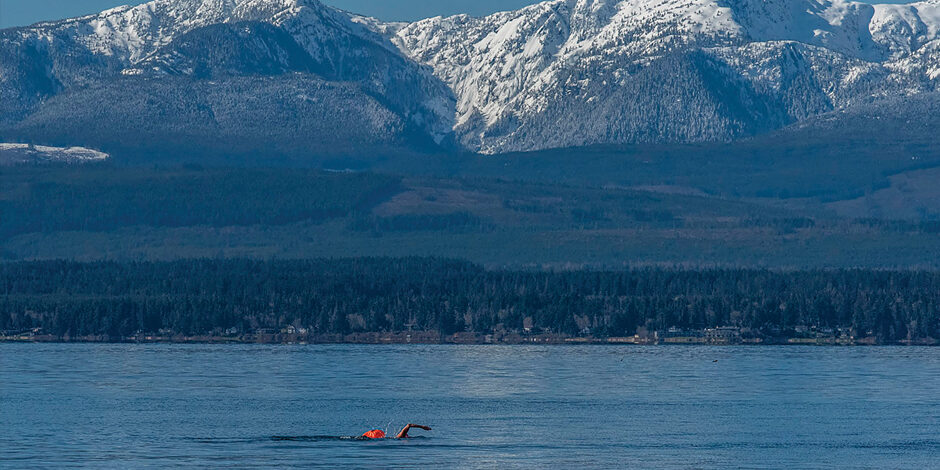 Wild swimmers are only ever one swim away from a good mood.

If there is one truth the pandemic has disclosed, it’s that, as humans, we yearn for connection to the elements. And perhaps there is no greater example of such connectedness than cold-water immersion. Let’s be clear, though—in the winter months, cold-water swimming hurts. The body struggles to deal with the sting of nerve endings on fire.

But clarity, reprieve from life’s day-to-day woes, and a useful perspective on the larger existential dilemmas going on around us can be found within that hurt.

It is no coincidence that what some swimmers have known for eons has become something of a Covid trend—a lockdown cliché, even. The subculture of cold-water enthusiasts is booming globally, especially in the United Kingdom and northern Europe, where Instagram pics and Facebook groups on the topic have appeared en masse. The secret is out. In the face of global health concerns, people from all demographics are finding connectedness via the blue buzz: the natural high offered by a cold-water dip that immerses body, soul, and mind.

Courtney Bardonner knows the thrill well. In 2016, inspired by images of cold-water swimmers in Denmark, she and a friend set themselves the challenge of swimming through the winter. At first, the idea was to swim once per month, but this quickly became once every weekend.

Soon after, Bardonner initiated the Point Holmes Wild Swimming Society on Facebook to seek out like-minded souls. Now in her sixth year of all-season swimming, Bardonner swims two to four times per week, and group membership has expanded from around 20 people to its current 366 members, of whom about 25 to 30 are regular year-round swimmers.

“It was a way of creating community through the pandemic,” explains Bardonner. “It was a saving grace. We were able to briefly socialize outside at a safe distance in the elements, following provincial guidelines, and get our fix of nature and endorphins.”

During the winter months the swim stakes are raised: water temperatures plummet as low as six degrees, and wild winds are frequent. The venture is not for the faint of heart. Bardonner swims skins, meaning she uses no wetsuit; only in the three coldest months does she opt for a neoprene toque, gloves, and booties.

Typically, depending on conditions, she swims for around 10 to 15 minutes, often covering 200 to 300 metres. “Every single winter swim is unique, depending on the conditions, temperatures, and swimmer fatigue,” Bardonner warns, “so you must be vigilant every time you go in.”

She describes “swimrise,” which became a spring and summer vigil for her and other Wild Swimmers—a de facto church alongside seals, crabs, and jellyfish, with seagulls hovering above. Among the swimmers was a sense of support and camaraderie that bordered on the spiritual.

Bardonner explains, “You are only ever one swim away from a good mood. When it is very cold, your body screams, ‘This is stupid! Get out!’, but once you are in and exercise the courage muscle, the cold water has a way of shifting your temperament. It brings joy through endorphins; you feel revived, renewed, healed, invigorated, and happy.”

She adds, “There is peace and gratitude and connection.” Everything else, it seems—at least for those moments of cold-water weightlessness—just washes away.