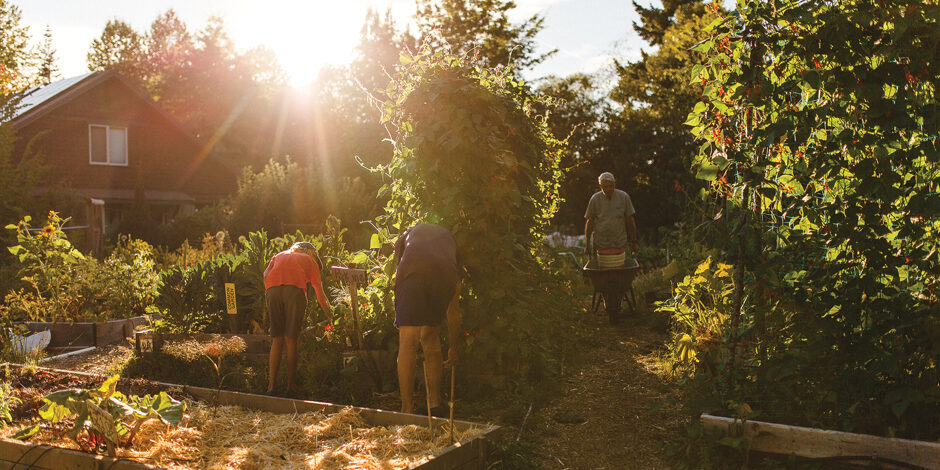 It’s 7:30 a.m. and my 11-year-old daughter skips out to join our 74-year-old neighbour for a sprightly walk around the neighbourhood. The morning walks are a year-round ritual here at Creekside Commons Cohousing—one of many practices that connect us to one another and oil the gears of community.

Our daughter has grown up in this intentional neighbourhood. Her friendships with retired neighbours, daily (even hourly) social interactions, and a safe, beautiful environment are things she takes for granted. For myself, living here is a step in a long-standing pursuit of community that goes back to my teens. This interest has taken me “back to the land” in the Kootenays, to a stint on a kibbutz in Israel, and to a master’s degree based partly on my research into communes.

I first encountered the cohousing concept in the mid-’90s when I designed some of the homes for The Middle Road Community in Nelson, BC. It’s a philosophy that aims to recreate the attractive qualities of village life—knowing and being known by others, mutual support, cooperation to accomplish individual and community projects, casual socializing, and formal rituals—while allowing for a comfortable degree of privacy and autonomy.

The ability to control the balance of public and private life is the major difference between cohousing and other alternative communities (like the communes of the ’60s and ’70s). It achieves this balance partly through design, and partly through the unique culture of a self-selecting community where people want to know their neighbours.

Since its introduction to North America in the late 1980s, the idea of cohousing has really taken off: there are currently more than 160 established communities and another 100 or so in development. In BC, the numbers are 13 completed and another 12 forming or under construction.

Cohousing communities, unlike typical developments, are designed to maximize the possibility of neighbours meeting face to face in the course of daily life. They are pedestrian-oriented, with cars kept at the periphery. Homes usually face each other through shared common spaces. Things like laundry facilities and mailboxes are located in a “common house,” a large central structure that also houses a community kitchen, dining room, lounge, extra guest rooms, and a children’s play area. It’s also usual to have a shared workshop, a large garden, and other amenities. Shared meals are an essential part of the culture, and these typically happen at least once a week.

Our community of 36 homes and 70 or so residents was completed in 2007, five years before my family and I moved in. Creating cohousing is a complex and challenging undertaking that involves purchasing and developing land; hiring professionals; raising large sums of money; and attracting a group of like-minded people (not necessarily in this order). The founders of Creekside Commons Cohousing benefitted from their decision to hire a consultant to help with all these tasks, but it still required deep personal commitments and many months of regular meetings to see the project through.

By the time we arrived in 2012, perhaps 30 per cent of the initial members had already moved on. (The initial years after founding can be a tumultuous time as relationships mature and settle, community norms and practices are decided, and some high expectations are left unfulfilled.)

These days, though, the neighbourhood is quite settled. One to two units will change hands each year, for the usual reasons that people move houses. We are sad to see neighbours go, but glad of the chance for new friendships and the injection of new ideas and enthusiasms. Fortunately, many of the founding group continue to live among us and remain deeply involved in the activities that keep us solvent and harmonious.

At Creekside, as in most cohousing, much of the regular maintenance and operations of the community is done on a voluntary basis by its members. We have nine acres to care for, which could be daunting if not for the steady work of our teams and monthly work parties. The main thing that makes cohousing communities function is participation.

After living in Vancouver, where I never once saw my immediate neighbours, and later in Victoria, where social engagements had to be booked weeks in advance, I find the frequency and informal nature of our connections here at Creekside deeply pleasing.

It surprises many people to learn that most of our neighbours are introverts, but there is something about the freedom to be social on whatever scale feels comfortable that holds a strong appeal.

During the first six months of the pandemic, with our common house closed and everyone socially distant at home, our solace came every day at 5:30 p.m., when we gathered in front of our homes for an outdoor dance party. These days, my daughter keeps a stash of pine cones close to the front door, ammunition for her ongoing and joyful war with our neighbour Ron. Ron, who turned 70 this year, retaliates with his Super Soaker water gun.

After almost a decade of being here, I am more convinced than ever that humans are really meant to live this way.