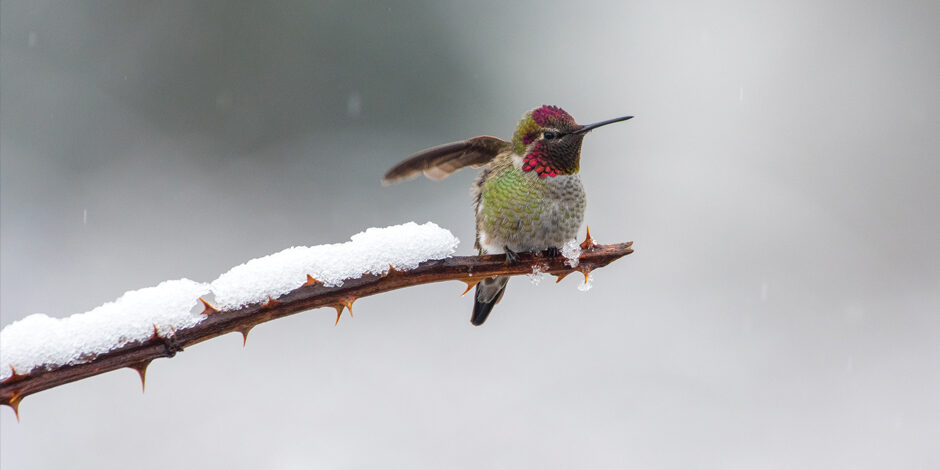 THE DUBIOUS PLEASURES OF WINTER BIRDING

The first time Tom (not his real name) had someone call the cops on him was in the winter. He was several blocks from where he grew up, binoculars pointed at a bay window in the suburbs of Saanich.

To be clear, he was just looking for a Brambling. To be even clearer, a Brambling is a bird. And to be fair, there was a bird feeder in front of the bay window.

Had the police conducted a psychiatric evaluation on Tom, they might have uncovered some worrying afflictions that set many birders apart from civilized society: addiction, a deep appreciation and sympathy for nature, and—essential for any winter birder—masochism.

It’s a made-up statistic that over 40 per cent of would-be birders do not survive their first winter. These folks, we must presume, are lost forever to other pastimes like bridge, gardening, or collecting Hummel figurines.

“Learn to bird” workshops abound in the spring, when impressionable youth, released from scholastic slavery, disperse in search of brightly coloured breasts in spring plumage.

Then the warm temperatures and heady days of summer scatter enthusiastic new would-be birders to their natural breeding habitats: camper-vans, tents in the backcountry, and—for some mysterious reason—Subarus.

Winter birdwatching, however, is a different game. The short, dark days mean birders rarely venture far afield. Instead, they can be found staking out their favourite marinas, stormwater retention ponds, and bird feeders—which, as the luckless Tom discovered, are often placed in front of bay windows.

And yet, there is joy to be found in winter birding. One feels accomplished simply for being outside. (Here, I must acknowledge my dog’s contagious enthusiasm for walking repetitive routes with idiotic disregard for bad weather. Good girl.) One can sleep in and still catch pre-dawn birding prime-time—right before brunch. There are no cherry blossoms to admire or roses to smell, just unadulterated views of challenging winter plumage amid stark twigs and fence posts.

In December, birders draw their year lists to a close and congregate, like Seussian Whos around a can of Who Hash, for that most sacred of annual birding rites—the Christmas Bird Count (CBC). The CBC is a day that pivoted nicely from its bloody origins as a Christmas bird hunt. Although it can get extremely competitive, it also contributes to possibly the best citizen-science dataset in existence, giving us much of our knowledge about bird populations in North America.

There’s an interesting contradiction in many birders’ personalities: many of us both love and hate other people (especially other birders). That said, it takes real dedication to continue chasing birds when the weather is arguably best suited for aquatic creatures. So I hope to see you out there this winter, binoculars in hand. And that nobody calls the cops on you.