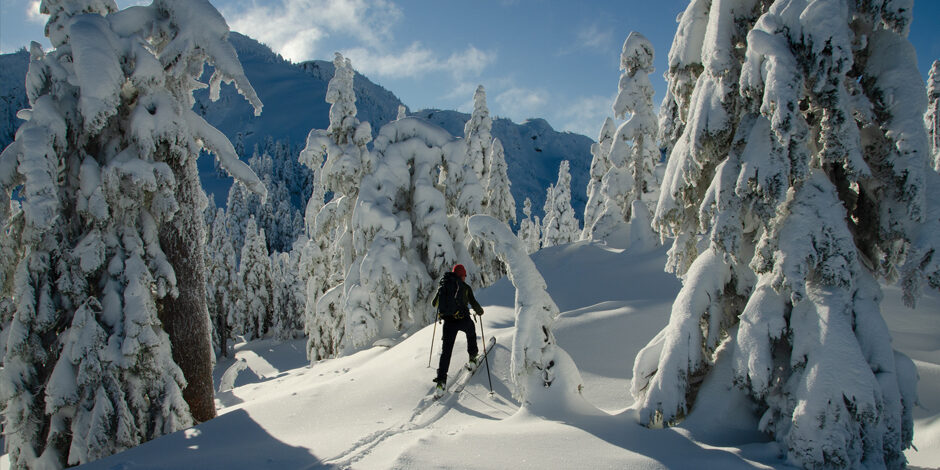 THE ELEVENTH HOUR FOR OLD GROWTH

After decades of clearcutting, can a fundamental shift protect what’s left of BC’s ancient trees?

The Beaufort Range sits temptingly in our backyard. If you’re a backcountry skier, then you’ve probably gazed at its snowy bowls and ridgelines while driving from Courtenay to Cumberland, when you should have been focused on the road.

I first skied in the range with a friend 15 or so years ago. We had found a retired logger in Fanny Bay who was then the keeper of the “golden” key that opened the Buckley Bay Main gate. He graciously lent us the key and we navigated a maze of logging roads that eventually delivered us to a cutblock on the shoulder of Mount Apps. From there, we slapped on the skins and ascended, at first through old logging and young trees, and then into a primary forest of lichen-draped yellow cedar, hemlock, and fir. It was one of those glorious spring days—still winter on the summit of Apps, but down at sea level Hornby Island looked tropical.

I remember thinking naively that the clearcutting would go no higher on Mount Apps, that the remaining fringe of old-growth forest would be there to stay. I was wrong. Over the years since my first trip, roads have been pushed and blasted almost to the alpine on Apps and its neighbouring summits as the last of the valuable old growth in this range has been cut.

The sad fate of forest ecology on Apps is symptomatic of a British Columbia (BC) forest sector that has been single-mindedly focused on maximizing extraction at the expense of biodiversity for far too long. It’s no surprise that we have reached the eleventh hour in terms of preserving what remains of some of BC’s most productive old growth: forests with trees that reach heights of 20 metres or more in 50 years—and that also happen to be some of the most richly biodiverse ecosystems in Canada.

A study published in the summer of 2020 by Nelson-based ecologist Rachel Holt and two colleagues unpacked the province’s accounting of old growth. Holt et al. found that of all the old-growth habitat in BC, just three per cent is suitable for growing large “climax forests” that are still frontiers of scientific discovery.

And of that relatively small land base, 97 per cent has already been logged.

This report was made public as BC’s NDP government was still pondering its response to the 14 recommendations made in A New Future for Old Forests, the strategic review of old-growth management the province had commissioned from veteran foresters Al Gorley and Garry Merkel.

Released in the spring of 2020, Gorley and Merkel’s report was an eye-opener. Beyond recommending urgent action to suspend logging in BC’s most at-risk ancient forests, the authors called for a “paradigm shift” away from an approach focused on industrial tree farming, towards one that prioritizes biodiversity, with commercial timber as just one of many benefits.

The report gives the government three years to make this fundamental shift. It’s a huge undertaking, and to be fair, it’s already happening in certain corners of BC’s forest sector. But generally, status-quo tree farming is still the norm. Despite our impressive system of parks and protected areas, we need to step up our game in most of the province that still lies beyond park boundaries.

Timber companies own most of the Beaufort Range; they have the legal right to harvest trees on those lands. (I’ll own my hypocrisy and admit that I frequently use their logging roads to explore the mountains. In fact, I’m a bit of a junkie when it comes to logging roads.) In my university days, I planted trees, ran brush saws, and managed silviculture crews at the end of gravel roads that went deep into remote and spectacular parts of BC; these experiences were the genesis of many a backcountry adventure. On balance, what I’ve witnessed over the years is the antithesis of land management that places any importance on biodiversity.

Biodiversity is critical to planetary health—for fresh water and clean air, carbon sequestration, pest control, soil rejuvenation, plant pollination, ecological resilience, and so many other natural functions that most of us take for granted. Of course, forest-based jobs are important. There’s a sad parallel narrative to the precarious position of our remaining old forests, and that’s the reality of mill closures and declining manufacturing capacity as many of the big players in the industry become bulk exporters of raw logs—and it turns out, exporters of jobs.

For most rational people, this has never been a pro/anti-logging debate. But surely we can do better than whack down entire forests, high-grade the best logs (many of them for export), then burn the giant piles of wood fibre left behind. In a modern nation like Canada, you’d think we would have policies and practices in place to ensure we get the most value from something as fundamentally valuable and important as a tree.