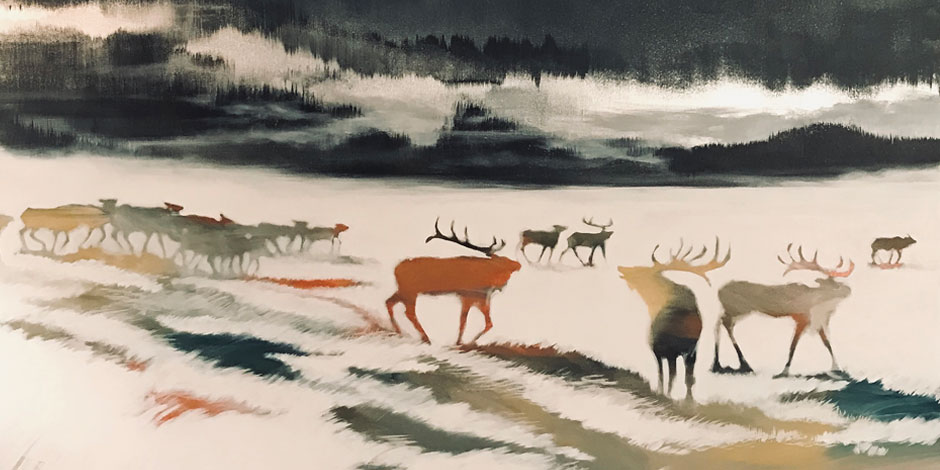 THE ELK IN OUR BACKYARD

“What was that?” says Scott. His head swivels in the direction of the sound.

I raise my hand above my head and blast the Hoochie Mama. The imitation cow-elk call echoes over the cutblock.

Scott Bell and I are trying to film Roosevelt elk in the Comox Valley for a short documentary. And we never thought it would be this difficult. It’s June and we’ve been tracking the herd for weeks. Signs of them are everywhere, but we haven’t seen them yet.

I hear it this time, too: twigs snap and bushes crash beyond the black edge of the forest about 200 feet away. The sky is orange and the daylight almost gone. If we saw an elk now, it would be too dark to film. I press my thumb on the call again. We wait, our ears tuned to the bush. The crashing continues, but fades. Whatever animal was in there, it’s heading away from us.

The next morning, we’re up at sunrise. Holding coffees, we wait, hoping the herd might wander into the cutblock below the knoll we’re camped on.

Cold mornings are a time for contemplation, and I think back to earlier in the spring when the project began. Neither Scott nor I had any hunting experience, so we enlisted the help of a local hunter to help us better understand elk. One evening, the three of us piled into his truck and set out down a dusty logging road to a location where he’d frequently seen them. He wore full camo and his binoculars rested on the dash.

“To find the herd,” I asked him, “should we be thinking like elk?”

It should have been obvious that to film elk we required the same skills hunters use to kill them, but I had thought since our intentions were benign, it would be somehow simpler.

The hunter taught us as much as he could about hunting in one evening, and it was eye opening.

Hunting, we learned, is slow. Typically, my enjoyment of the wilderness coincides with movement. Whether it’s mountain biking, skiing, or hiking, I’m always going from one place to another. Tracking elk requires being much more aware of one’s surroundings. It’s noticing nibbled ferns, disturbed dirt, or a tree rubbed by an elk. It’s using all the senses. It’s listening to the forest, thinking about scent, observing wind direction, and understanding how the elk move across the landscape. It’s about increasing the odds of an encounter, and perhaps the most important element of that equation (besides luck) is time. It’s simple math: the more time you spend in the bush, the more likely you are to see an elk.

“Well,” says Scott, back at our camp on the knoll. The sun is well above the horizon and we’ve drunk all our coffee. “Should we call it?”

I agree and we pack up. Almost weekly over the entire spring we’ve been coming to this spot. As fiddleheads uncurled, juvenile birds began to make their first tenuous flights, and spring turned to summer, signs of elk were everywhere. Even now, fresh prints pepper almost every logging road. Only days earlier, a friend saw the elk herd in this exact spot.

But despite many close calls, we haven’t seen them. With summer just around the corner, we decide we don’t have the time necessary to continue the project. Scott folds up his tripod, unscrews the long lens from his camera, and we leave the cutblock for the final time.

Our efforts, though, weren’t fruitless. Almost every time we went out, we saw wildlife. On two separate occasions, cougars leapt across the road in front of my truck. Harrier hawks patrolled the air 20 feet above our heads. Day-old baby fawns curled into little balls close enough for us to touch them. Black bears grazed by the roadside.

It was like the only animals we couldn’t see were the ones we were looking for.

Months later, I’m on my usual dog walk down a winding forest path behind my house, and elk are the last thing on my mind. My dog Mika runs off into the dense bush and I call her back. The words are barely out of my mouth when a thunder of hooves erupts around me. Through the thick greenery, I catch glimpses of animals moving. I stand close to a tree and call Mika again with a little more urgency. She returns, looking as surprised as I feel.

I slip down the trail, and 50 feet ahead, I see them. The four cow elk cross the path first. Brown, with white butts, they stick close together. They flee down a steep ravine, through a creek, and up the other side. There, they wait for the last member of their small herd.

I hear crunching leaf litter and a guttural rumble, and as the sounds get closer, my heart beats against my chest. High above the salmonberry bushes, the tips of antlers appear. They sway through the air as a large bull elk saunters across the path in front of me. In much less of a hurry than the cows, the bull rips off the tops of ferns as he passes. He doesn’t seem to notice me crouched just feet away. I don’t have a camera and didn’t bring my phone, but I don’t care. I keep Mika calm and enjoy the moment. The elk treads down the ravine and up the other side to join the females. Then the herd vanishes as quickly as it appeared.

Scott and I tried so hard to find these animals and failed. Only in a random encounter did I finally see them up close, and I think that’s many people’s experience with elk. Whether it’s on the side of the highway, near a logging road, or even in our backyards, we run into them only by happenchance—and not very often.

Every location mentioned in this story is a half-hour drive or less from downtown Courtenay. The fact that large animals like elk can remain in the forest mostly undetected is a testament to just how much dense wilderness surrounds our community. If you’re lucky enough to come across an elk in the Comox Valley, take the time (from a safe and respectful distance) to enjoy the experience.

Take it from me, it’s much easier to see them when they come to you.