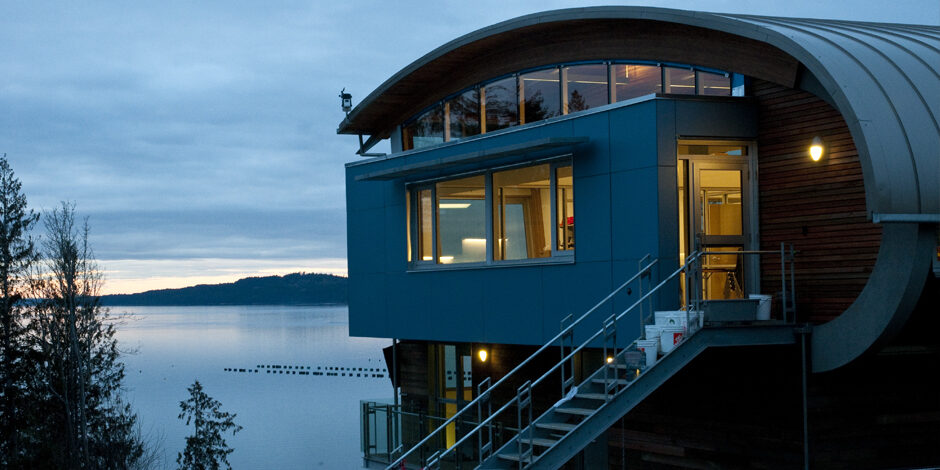 At the end of a meandering gravel driveway tucked among lush cedars stands the Deep Bay Marine Field Station, a building that resembles a giant oyster.

“It was designed to look like that,” says Carl Butterworth, the Marine Field Station’s manager.

As part of Vancouver Island University (VIU), the station conducts applied research for British Columbia (BC)’s shellfish industry and provides learning opportunities for the public. The skeleton of a grey whale hangs from the ceiling in the entrance, and, on the top floor, kids can play with interactive displays, including the shell of a clam big enough to swallow a scuba diver’s leg. In a wide room downstairs, underneath bright lights, sit rows of glass jugs, glowing brown and neon green. Although they look like someone’s spoiled homebrew beer, they are actually full of algae.

Researchers use the algae to feed oysters, scallops, and whatever shellfish they happen to be growing in the rooms downstairs. These experiments help shellfish growers grow a better product.

And now, the Field Station is expanding its research. VIU has partnered with the provincial government’s Food Hub Network to open the Centre for Seafood Innovation, an initiative to foster growth in the food processing sector.

There are 12 food hubs around the province, each with a unique flavour and tailored for use in its area. For example, the Plenty & Grace Food Hub & Innovation Centre in Surrey primarily supports the development and distribution of plant-based products. In Port Alberni, the focus is on seafood processing. And in Deep Bay, it’s all about seafood innovation.

The goal of the Centre for Seafood Innovation is to provide entrepreneurs access to infrastructure, equipment, and resources to foster and grow a competitive and resilient seafood sector. “We’ve been planning towards this for ten years,” says Butterworth enthusiastically. The Marine Field Station was the ideal location because it already has a commercial culinary kitchen (with ovens, stainless-steel countertops, and walk-in coolers) and event and training space.

What the centre needed was a manager, and food scientist and communication expert Debra Hellbach was hired. A self-described “food business catalyst” with 35 years’ experience in the food and seafood industries, she has earned a BC Food Industry Leadership Award and received a Mitacs scholarship for her research into perceptions of food processing.

“Debra is literally the woman who’s ‘been there, done that’ in food processing in British Columbia,” says Butterworth.

Although Hellbach only began the job in April 2021, she is already hard at work finding collaborators for the Centre for Seafood Innovation. “[Entrepreneurs] could come in and use the kitchens,” she says, “and we could help them get a chef or food scientist to help them with recipe development.” Cameras have been installed throughout the kitchen so chefs or food scientists can interact virtually with BC-based entrepreneurs.

According to Hellbach, the Centre for Seafood Innovation will help in other ways, too. “Let’s say someone has an idea for a product they’ve made in their kitchen, and they need to scale it up. We could work towards finding expertise and resources to help them do that.”

She often refers to what she does as “matchmaking,” explaining: “I can link you with a consultant and/or a food scientist and/or a packaging person. Many of these entrepreneurs—foodpreneurs—know how to sell in a farmers’ market but don’t know how to sell wholesale or to a retailer. There’s an awful lot to it.”

Vancouver Island is especially susceptible to food-security issues, a concern exacerbated by the pandemic, and Hellbach sees seafood as part of the solution. “By developing value-added products through the centre, we will reduce our reliance on food from other regions,” she says. “We’ll be producing our own food locally for consumption.”

An obstacle to selling seafood to Canadians, though, is our eating habits. Research indicates Canadians use very little seafood because they don’t know how to prepare it, says Hellbach. And part of her job is developing an initiative to better educate locals on seafood preparation and the merits of its consumption.

Hellbach is optimistic her efforts will help BC’s seafood producers, too. Their bottom line was hit hard by a dramatic decrease in global seafood consumption as demand from restaurants plummeted during the pandemic. A long-term increase in local consumption would help make the industry more resilient to demand fluctuations.

Both Hellbach and Butterworth believe strongly in the centre’s ability to create local employment. Hellbach expects the value-added food production to lead not just to more jobs, but more good jobs. Jobs requiring more skills are both more interesting and better paid. “That will also attract people to stay and work in the industry,” she says.

Butterworth adds, “We’re hoping that each year there are new companies starting up out of this, or existing companies adding new product lines.”

The Centre for Seafood Innovation complements the important work already being done at the Deep Bay Marine Field Station, and at the end of that twisting gravel driveway, inside the oyster-shaped building, it’s another glimmering pearl.

If you’re a foodpreneur with a recipe idea using local ingredients,
the Centre for Seafood Innovation is looking to help you bring your product to market. (They consider non-seafood products as well.) Learn more at https://research.viu.ca/seafood-innovation-centre


PHOTOS COURTESY OF THE CENTRE FOR SEAFOOD INNOVATION 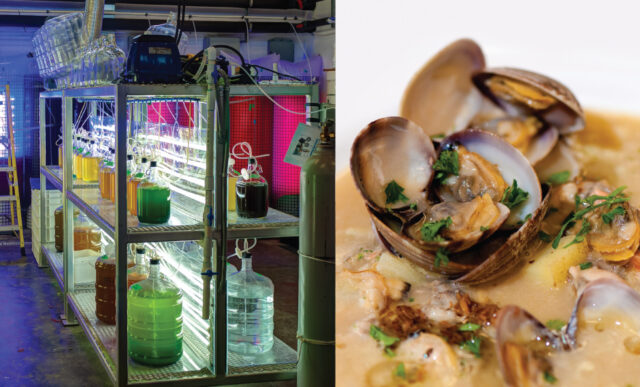