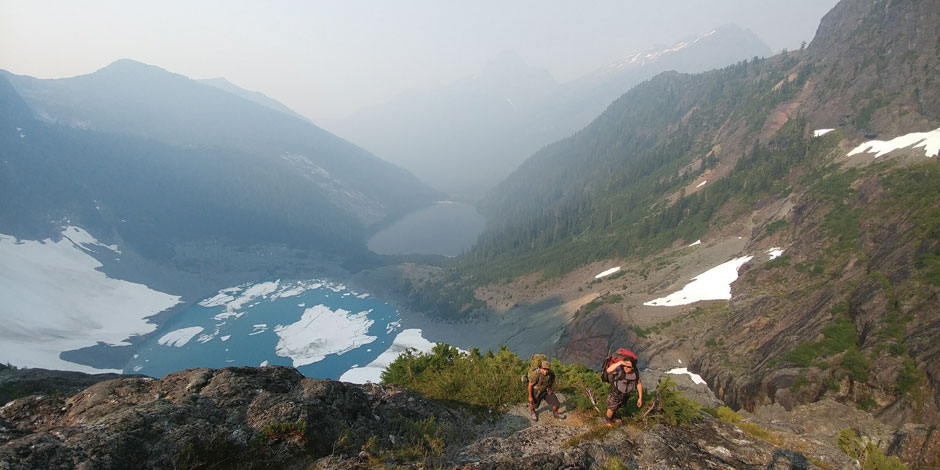 THE GEM OF ISLAND MOUNTAINEERING

Three locals tackle Mt. Colonel Foster to find that it has more lessons to teach than a single climb can provide.

Mt Colonel Foster is among the most impressive peaks on Vancouver Island. Its east face rises over 1000 metres and offers challenges on par with many classic routes in the Selkirks and Rockies. The approach is an attribute, with a trail leading nearly to the base of the mountain, a feature missing from many climbs on the Island.

I set out with Neil Borecky and Roderick Lane to attempt the traverse. Weather and our pace denied an attempt on the true summit, so we came up with an alternative plan to circumnavigate the peak. From the south col, the terrain looked manageable. The initial scree field stretched on until the sidehill steepened and the slick ground cover rejected our boots. We climbed to a low shoulder and were greeted by a meadow surrounding a clear pool that offered water and coaxed us into a nap. The sublime setting nearly lulled us into staying the night, but we checked our supplies and shook its spell. We had to keep moving or we’d run out of food. As we set off we saw that we were only halfway around the mountain.

Soon we were blocked by impenetrable alpine hemlock and a maze of cliffs, slowing our progress. As the sun’s alpenglow danced above, we gained the long, final moraine to the north col. We’d made it around the mountain. Our plodding steps led to our resting spot and we ate quickly, the mosquitoes and midges thickening to a hum and then a frenzy. My body ached when we were greeted by the dawn. We laughed with high spirits, knowing the worst was behind us. A steep descent through slick undergrowth led to the trail at Landslide Lake and to the parking lot. A six pack was stashed for our return, a somber drink as we tended our blisters and talked of our next attempt.

A year later, Neil, Rod and I returned for a serious attempt at the summit. No crack of dawn heroics; we set off early with a quick stride. It was an historic year for forest fires, and the sky was dark with smoke. After hours of hiking the gentle incline we took a steep curve past Berg lake, to the south col 700 metres above, and ascended a beautiful ramp, cleft by a creek, with sections of low 5th class. I love these places, where the alpine looms above and its influence can be seen and felt in the polished rock beneath our feet. Grinding spring avalanches prevent all but the most prehistoric of life from clinging to the cliffs, and the lichen is dry this time. Our bags are heavy and our legs tired when the col greets us with flat respite. We eat and sleep, with no time to dwell on tomorrow.

From here, there are five summits to traverse, and we made the southeast peak in good time. An airy notch leads to the south peak, which offers little pause other than the 1000 metre relief to the lake below. We reached the rappel to the hanging glacier in relative ease. This was one of my favourite sections. Above us the smoke thinned and the horizon became defined by the boundary of the light sky and the obscured earth. The exposure was surreal. Old growth, so huge and ancient, now softly cradled the lakes below. A glacier that has fought the mountain for millennia now stands underneath us. The mountain is worn but imposing. Time and space stretch toward the ancient and I catch a faint glimpse of infinity.

I set an anchor and rope up for the descent to the steep ice field. It’s a long and awkward rappel with a heavy bag, and the bergschrund threatens me at the glacier’s edge. I swing onto the corn snow and quickly chop a stance with my ice axe and call to Rod to come down. I help him onto the glacier and he helps Neil in turn. As Neil descends, I make my way off the steepest section toward the next ascent. The snow is thin with ice underneath. Rod comes last, and I don’t see him slip. He yells and I look to see his terrifying acceleration. My heart leaps, and the glacier suddenly seems steeper and the bottom edge closer. But Rod handles it calmly, and marches our way.

We pushed on while the light held, looking for a high bivouac, and found a place above the smoke. Sunsets from a mountain top are magical. The sun shone red as it sank toward the horizon and burned against the murky sea of smoke around us. The moon was bright and nearly full, casting shadows as we fell asleep.

The next day we made the summit and enjoyed a moment of success. The peak is only the halfway point, and mistakes are generally made during the descent. Weary and cautious, we made our way down, then over the final North Peak where a well-established rappel station lured us off route and we descended a steep, loose gully. Hours later we reached the smoky foot of the mountain. Pulling the ropes on the final rappel dislodged a boulder, which cut the rope and forced us to run for cover. A stern reminder of the of the power of the mountain.

We had succeeded at an Island test piece, setting a baseline for our abilities. One of the most rewarding aspects of climbing is returning to a challenging route with more confidence, strength, and experience. I can improve my flow and to take more in. The ridge crests seem broader, and the dizzying heights sharpen to reveal the beauty around us. Some of my best climbing has been with Neil and Rod. I’m looking forward to our next trip. Perhaps we’ll be a little quicker this time. 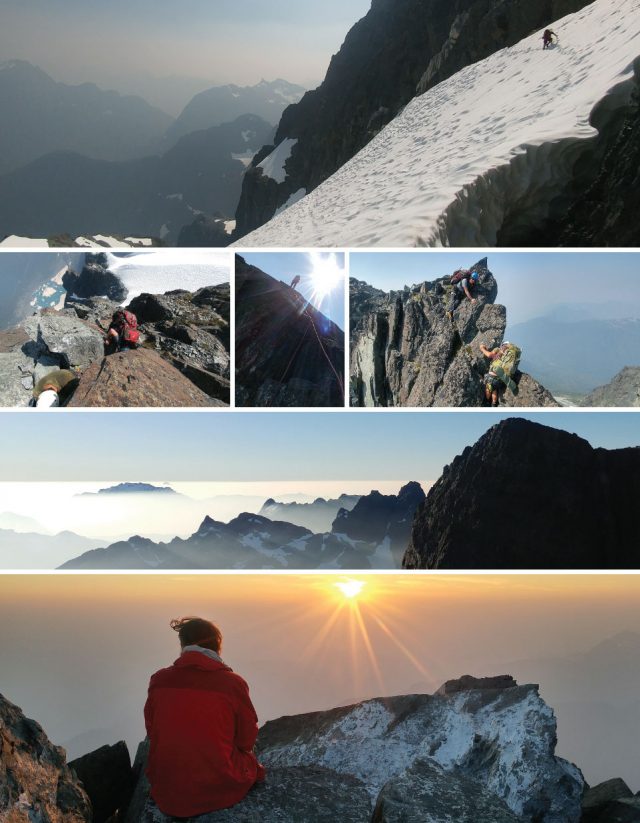