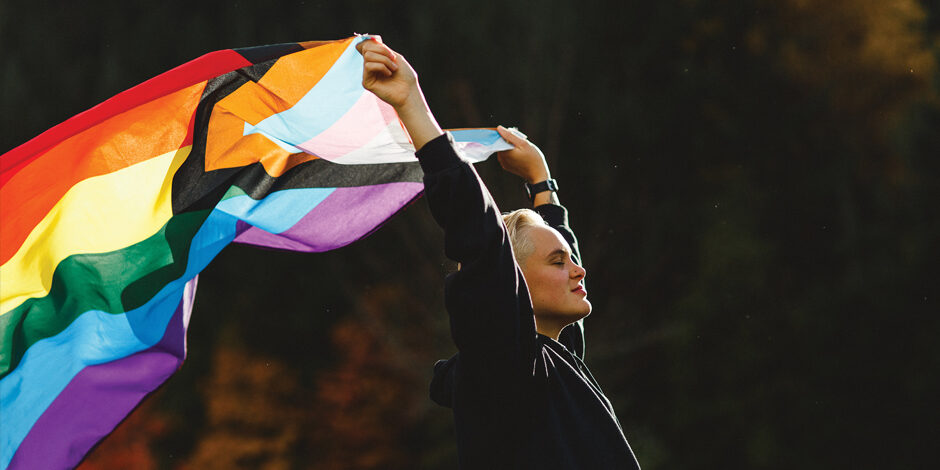 THE GIFT OF MOTION

A new non-profit wants all queer athletes to have role models and cheerleaders.

Growing up in the Comox Valley, Mal Irvine, who uses they/them pronouns, often felt uncomfortable. They were assigned female at birth and curtsied to “societal pressure to just fit in with norms,” but when they looked in a mirror, they never saw a woman.

This cognitive dissonance didn’t hold them back—on the contrary, they became an accomplished athlete—but it was confusing. When coaches and teachers split groups into boys and girls, Irvine, who now identifies as non-binary, said it never felt right.

“I didn’t know any queer individuals, so I thought that being gay or trans was seen as this bad thing,” they say. “I stayed silent and never talked about my insecurities.”

Zara Nybo has had her own challenges. “I have a very privileged life, being white and cisgender, appearing heteronormative, and a long list of other privileges we could spend all day unpacking,” she says. But she had a sexually manipulative coach in her young athletic years, and she struggled with an eating disorder.

Nybo, now 20, sought therapy, but it wasn’t until she started powerlifting that she started to recover.

Early in 2021, Nybo and Irvine were both coaching and teaching classes at Wild + United Athletics, a gym and fitness facility in Courtenay. Though they had had different struggles, they discovered they shared a desire to help others avoid the same kinds of experiences.

“When I see an issue, I’ve always felt the need to take action,” says Nybo.

In June, with the help of Nybo’s mom and sister, Jacqueline Kofoed and Bella Nybo, they started the Vancouver Island Queer Athletic Association (VIQAA). It’s the only non-profit supporting young athletes who identify as LGBTQ+ on Vancouver Island—and possibly in the whole country.

“If I had had queer role models growing up here, I think I would have embraced my identity a lot earlier,” says Irvine, who didn’t come out as non-binary until 23 (they’re now 25). “It can be terrifying growing up in a heteronormative world when you fall out of that norm. I want [queer youth] to know there is support and resources dedicated to helping them. I want to be the queer role model I didn’t have.”

LGBTQ+ youth are more likely to experience bullying, harassment, and family rejection, says Irvine. Both they and Nybo believe that sports and exercise are an effective coping mechanism for depression, anxiety, and other mental health issues, and a freeing place from the confines of social expectations of gender and sexuality.

They wanted to help more LGBTQ+ people access the benefit of sports and exercise, so they decided to raise money to support queer athletes during Pride Month. They searched for a group to donate the funds to, but they couldn’t find any.

So they started their own.

VIQAA aims to use funds and in-kind donations to support anyone aged eight to 21 who lives on Vancouver Island, is part of the LGBTQ+ community, and plays a sport or “moves their body in an energetic way.”

Funds can be used for anything a queer athlete might need help with, from gym memberships to mental health counselling. The group’s first $500 grant went towards building a home gym for a queer person who doesn’t feel comfortable working out in public.

Nybo and Irvine raise money from fundraising events, cash donations, and sticker sales. They welcome non-cash contributions that they can pass on to recipients, like sessions donated by a therapist or a six-month gym membership.

Anything can help, says Nybo, in their humble effort to have a global impact.

“I want to expand VIQAA worldwide and help every young athlete realize their full potential,” she says. “But if VIQAA can be a small part in helping a young human realize that their life matters, and that they have a gift to share with the world, then we are doing something meaningful.”