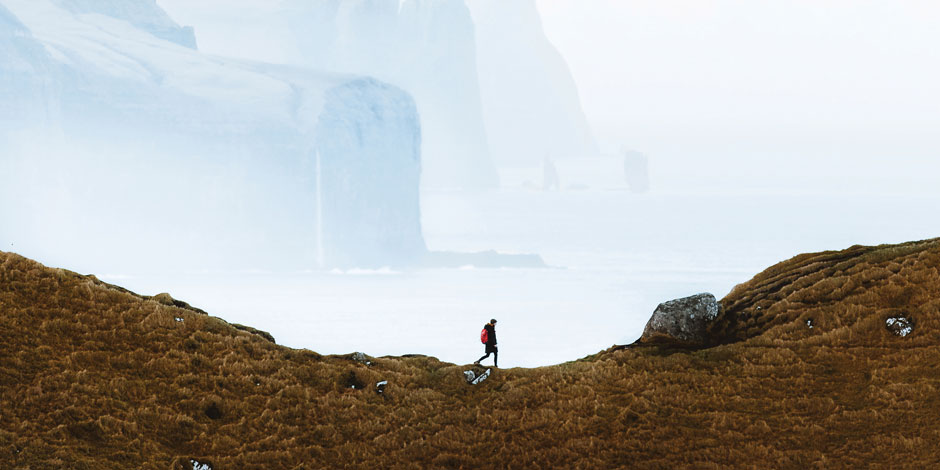 Two adventurers discover the quirky magic of a cluster of volcanic islands located halfway between Norway and Iceland.

The rising sun cast a pink glow on the cliffs as we prepared for landing on a crisp November morning. Just five minutes earlier, I had been staring down at the North Atlantic Ocean through a small, round window, wondering when we would finally start to see signs of life. Then, out of nowhere, immense basalt cliffs came rising out of the sea at unimaginable angles.

Dotted halfway between Iceland and Norway, these 18 volcanic islands might just be Europe’s best-kept secret. Breathtaking sea cliffs, waterfalls pouring into the ocean, historic villages, and rolling hills that are home to thousands of sheep just scratch the surface of what the Faroe Islands have to offer.

Isolated, untouched, and unforgiving, this land was settled by Vikings more than a thousand years ago. Despite their status as part of the Kingdom of Denmark, the Faroe Islands (Føroyar) are distinct in their history, practices, and language: locals speak a derivative of Old Norse called Faroese.

A seafaring people whose livelihood relies on fishing and exporting, the Faroese have preserved their unique, historic culture in a way that feels like stepping into a time capsule. Many villages are largely made up of grass-roofed dwellings called turf houses, which offer natural insulation and protection from the 300+ days of annual rainfall. (Visitors can rent a turf house on Airbnb to experience an authentic way of life during their stay.)

With a human population of less than 50,000, the Faroe Islands are home to more sheep than people, and indeed, upon landing, we were greeted by a herd of sheep grazing on the Vagar airport lawn.

It was just past noon and we were already losing daylight; days are short this far north in the winter. What we didn’t know when we arrived was that we would be some of the Faroe Islands’ only visitors during the entire month of November, exploring the cliffs, waterfalls and tiny villages in almost complete solitude. Venturing around the islands on both land and sea, we found ourselves sharing the breathtaking landscape with just the wind and the birds.

Connected by small ferries and underground tunnels, the scattered islands hold an irresistible allure to adventure seekers. With our cameras charged, hiking boots cinched, and microspikes at the ready, we set off in complete darkness each day in pursuit of views over the breathtaking mountains and jagged coastline. Each island has its own unique character and charm. Some have ancient farms and homesteads; others have sandy beaches. Many islands are uninhabited, as the sheer basalt cliffs are less than enticing to homebuilders and settlers.

Our curiosity about traditional Føroyar culture led us to climb aboard the Norðlýsið (meaning “Northern Lights” in Faroese), a 25-metre wooden schooner built from Canadian oak in 1943. The captain and crew, whose families date back hundreds of years in the Faroe Islands, shared stories of their ancestors and cultural traditions while we sailed alongside sea caves and a massive old lighthouse at the southern tip of Nólsoy Island. We learned about the historic, yet controversial, local whaling industry, and an annual summer music festival where shows are performed in caves. Sailing the rocky seas, feeling the wind whip through the sails, and watching the 3 p.m. sunset over the horizon is an experience I won’t soon forget.

Totalling a mere 1,399 square kilometres (just 1/25th the size of Vancouver Island), these curious islands remain largely undiscovered by the rest of the world, possessing incomparable beauty, mystery, and charm. While winter in the Faroe Islands—or any high-Arctic region, for that matter—may not be for the faint of heart, there is a certain magic to traveling during the off season. With the streets decorated in colourful lights and laughter echoing from cozy little taverns, you get a taste of what life is really like in the Faroe Islands. The air is cold, but somehow, the atmosphere is warm.

Getting there: The easiest way to arrive in the Faroe Islands is through Copenhagen, Reykjavik, London, or Edinburgh. 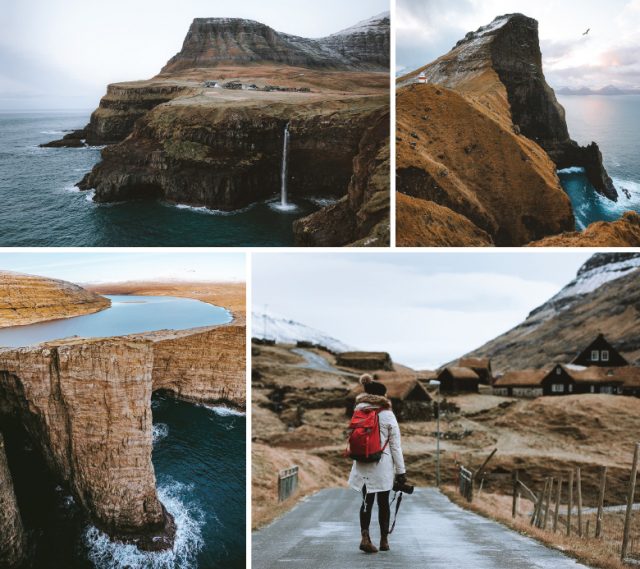