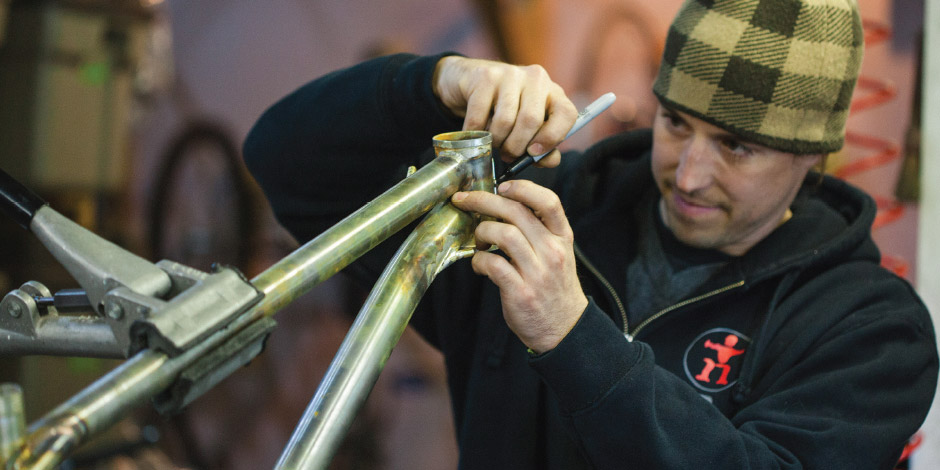 The first bike I ever owned was a black triumph BMX with yellow gum-wall tires and matching grips. I have always wished I had kept that bike. Not to ride or even hang on a wall, but to remind me of long summer nights, endless gravel roads and dirt paths. To remind me of what it was like to be a kid without any responsibilities and all of it while riding that bike.

Anyone who rides a bike can remember the first time they ever rode a bike. I am not talking about the time when your dad ran alongside holding you upright as you tried to balance on a bike that was way too big for you. I am talking about the first time you swung a leg over your own bike, pushed off from the curb and under your own power rode around the block with that ear-to-ear grin. After spending an afternoon with Sam Whittingham at his home and shop on Quadra Island, I got the sense that he always has that same Cheshire cat grin anytime he’s on a bike.

Sam is a bike racer, turned bike fabricator who is the mad scientist behind Naked Bicycles. I’m sure his enigmatic personality and passion for creating the perfect bike is one of the many reasons people will wait up to a year for him to build their masterpiece. I first met Sam, at the Waverly Hotel in Cumberland, on the eve of the first Cyclocross race of the “Cross on the Rock” series. It was a rather fitting venue for him to be unveiling a fleet of matte black steel, single-speed, cross bikes. The steed of choice for the 2014 Naked Factory Race Team.

Naked Bicycles started in 1998 in response to the sudden influx of mass produced bikes from off shore manufacturers. At that time, he set out to make an honest bike made of metal without any lavish styling’s or adornments. A bike with aesthetics based on its purpose that reveals its raw and unfinished materials. A truly “Naked” bike. Since that first bike made with Columbus tubes from Marinoni, Naked Bicycles has built well over 1000 completely custom bicycles. And, although their bikes are concentrated locally, they have customers in nations like France, Italy and Malaysia.

On a grey and wet Friday afternoon this past April, I hopped on the ferry to Quadra Island to visit his shop that I had heard so much about. Tucked away from civilization where the paved road eventually turns to gravel and then to dirt, situated on a 120 acre shared parcel of land, rests the home of Naked Bicycles. Sam has converted his Dad’s old cabinet shop into the fabrication headquarters of Naked Bicycles. Every step of the process is completed in-house from the cutting and welding of tube sets, painting and frame finishing and final assembly. All of it is done from this shop in the woods. With access to the entire Quadra Island trail network less than ten feet from the shop’s front door, one could not ask for a more idyllic and appropriate place to have your dream bike built.

It’s hard not to get caught up in Sam’s enthusiasm as he touts the benefits of the “29er+” wheel size and running disc brakes on road bikes, or as he regales stories of their accolades at past years of the North American Handmade Bicycle Show. Sam denied that he was an innovator of any kind, but it’s Sam’s lack of bias and desire to try new things that makes his approach to building bikes more innovative than most.

I can’t help but think that somehow Sam’s passion for bikes is welded into every bike he builds. At one point, Sam told me that it’s their goal to build bikes that not only get you from point A to B, but to make sure you arrive at your destination out of breath and with a big grin on your face. Anyone who owns a Naked bike will tell you that their bike has a soul, a personality beyond its purpose. As time wears on, technology may change, but that bike built by Sam will continue to make his owner smile every time he pushes off from the curb. 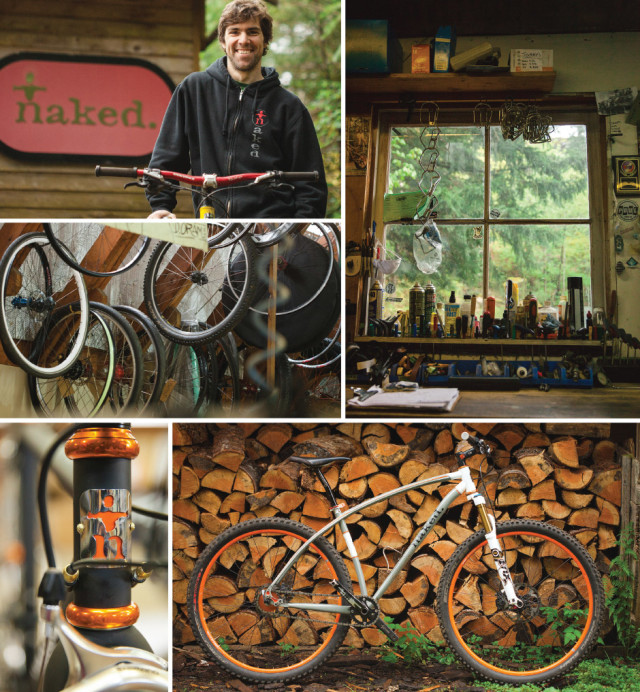