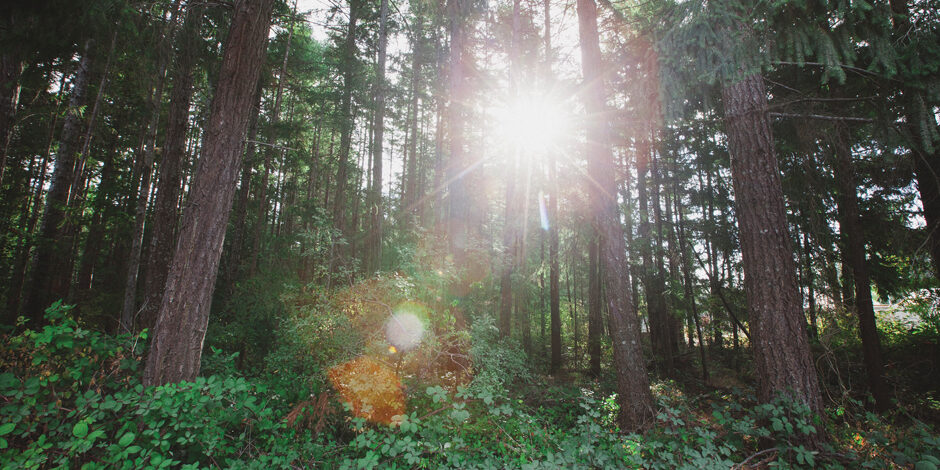 Comox’s favourite forest playground has many stories to tell.

Etched into the fabric of Comox life, the Northeast Woods are considered by many locals, especially newcomers, to be an iconic parcel of serene wilderness. The woods, almost like a custodian watching over the township, are home to second-growth forests, meadows, sand dunes, and marsh wetlands. A wealth of wildlife thrives in these ecosystems, including birds, mammals, reptiles, amphibians, and fish, along with native trees and unique plant species. In this popular playground, dog walkers, hikers, and mountain bike enthusiasts share the trails with an overarching vibe of kindness and cooperation.

But amid the tangled undergrowth, the remnants of yesteryear are evident. Discarded rusting metal objects, even cars and kitchen appliances, present a throwback to an era when this was the Comox municipal dump. Deep holes from abandoned wells also exist in some forested areas, secluded and secret from public knowledge.

The stories and incarnations of this place are old and many.

Initially occupied by Coast Salish peoples, the Comox Peninsula saw its first colonial homesteaders take over sections of land in 1862. They immediately began to leave their mark. Sections of Lazo Marsh were drained so settlers could grow potatoes and hay, while logging began in the southern forested portion of the area around 1890 and continued into the 1920s.

From 1949 to 1976, the land at the Torrence Road terminus of the woods served as a dump. According to one long-time local resident, the dump was a “big drawing card for people… [who] would help themselves to the many discarded items,” especially things left behind from CFB Comox when personnel were transferred to other bases.

“People also used to go in for shooting practice and would often shoot up the old cars that were dumped there. Some people learned to drive there and sometimes cars were crashed and abandoned,” the old-timer recalls.

Not far from the dump, at least one homestead remained active until not so long ago. “Gordon Pickard farmed here from the early 1970s, possibly earlier, until he died in the late 1980s. He had the right to run cattle and harvest a few trees,” says my source, who adds that Pickard used bark mulch from Field’s Sawmill (now being reborn as Kus-kus-sum), to build a road to Nobby Clark’s farm (now the Comox Valley Regional District’s Lazo Wildlife Park). Sections of this road have become part of the current trail network, and the Pickard Farm area within the woods is still relatively open.

Meanwhile, in the nearby Lazo Marsh area (aka Radford Swamp) during the 1960s, there were still large stretches of open water sufficiently deep to paddle a boat around. Bert Marriott, a local bird enthusiast, bought 175 acres and established a bird sanctuary.

The locally based Friends of Comox-Lazo Forest Reserve (FOCLFR) was established after citizens rose up in opposition to the Northeast Comox Development Plan presented to Comox Council in 1992. The plan was for much of the forested Crown land adjacent to Lazo Marsh to be cleared to make way for housing. Relatively little green space was to be spared.

“We were horrified at the proposal,” explains Barbara Price, who has been the president of FOCLFR for 25 years. “Having lived in the area for many years, I was very familiar with the Northeast Woods. I presented an alternate plan to Comox Council. It was very simple. All the Northeast Woods were coloured green. This was top priority.”

Price and fellow activists garnered huge public support as they presented numerous briefs to Council. They highlighted the importance of protecting the ecosystem for its own sake, its value for water retention around the Lazo Marsh and farmlands, and to avoid the potential release of toxic chemicals from the construction of residential homes and roads.

Their intensive lobbying continued throughout 1993, with the support of environmental groups, culminating in a May 1994 public hearing where an estimated 600 people turned out to support the preservation of the forest. The result was that the entire northeast section was designated as Crown forest reserve by the government of British Columbia.

In 2011, the FOCLFR went into overdrive to educate the public about a new concern: to the west of Torrence Road, a significant piece of the Northeast Woods was slated for residential development—including an extension of Torrence Road that would cut through the forest. The problem was solved after the province transferred 32 acres of Crown land to the K’ómoks First Nation, who then leased it to the Town of Comox for recreational use, and as a buffer to the WMA, under a 99-year agreement.

The Northeast Woods have long been a forested oasis for many Comox families. During COVID-19, the number of park users skyrocketed as people sought fresh air and escape from the confines of public restrictions.

Use of the area continues to evolve. For example, efforts are being made to minimize trail building by mountain bikers, who built many of the existing trails and for decades rode this network with zest. And in 2018, when a controversy over in the park garnered local headlines, signage was erected indicating the likelihood of encountering off-leash dogs. This was more a concession to a lack of enforcement resources and upholding longstanding traditions than about explicitly explaining the current bylaw.

However, says Price, “while the traditional use of the woods for off-leash dog walking is strongly ingrained, the requirement in all designated Wildlife Management Areas is that dogs be leashed at all times.”

These woods have a long and storied history; from Indigenous use and stewardship through colonization, farming, logging, hunting, the threat of demolition for residential development, the power of public outcry, and now government and First Nations protection.

Amid the ebb and flow of time and shifting dynamics, the beauty and peacefulness of the woods remain constant. Tall trees inspire, birds sing, the earth breeds and breathes, and people and their pets play.

“The Northeast Woods are on our doorstep,” adds Price. “They provide a beautiful and clean green space for town dwellers and a habitat for mammals, birds, and amphibians. We can all rest assured that the woods are now protected for all of us.” 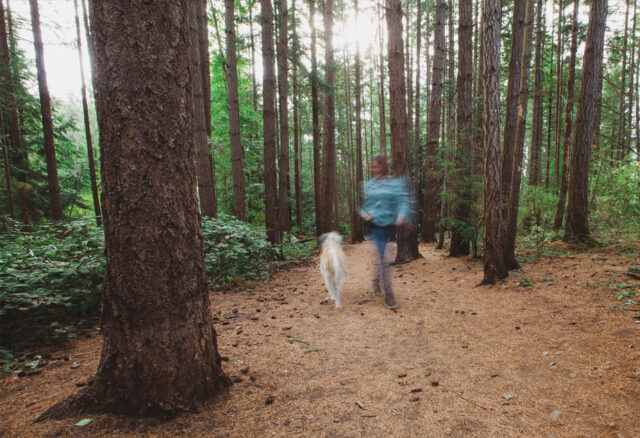