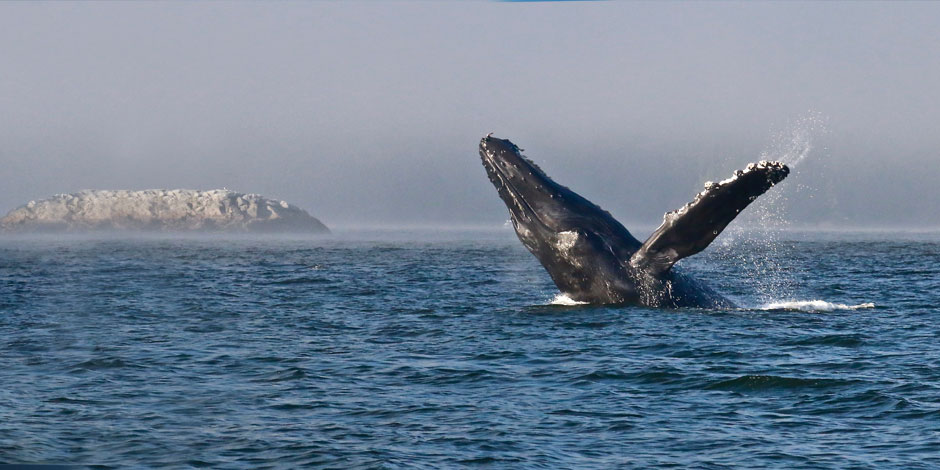 THE RETURN OF GIANTS

Following a decline due to the West Coast’s whaling history, the humpback population around Vancouver Island is making a massive comeback.

For the past 15 years, I’ve spent summers working as a kayak guide leading multi-day trips, mostly in the waters surrounding Vancouver Island. Last summer however, I worked as a whale watching guide for Campbell River Whale Watching. I was in awe of the amount of sea life we have in the waters surrounding the area: harbour seals, Dall’s porpoises, sea lions, and occasionally large pods of Pacific white-sided dolphins. The biggest and most impressive animal I saw was the humpback whale.

On an evening tour I saw a large, bushy blow, typical of humpbacks. The whale was very near shore, lunge feeding. This is when the whale comes up out of the water with its mouth wide open, taking huge amounts food-laden water into its throat. They feed on krill and small schooling fish such as herring.

Humpbacks in our area are usually 12m long, but can be as big as 17m and weigh up to 40 tonnes. They have a small dorsal fin two-thirds of the way down their black backs, while their bellies are black and white. They have long pectoral flippers which are about a third of their body length—longer than any other cetacean. Humpbacks also have bumps, or knobs, called tubercles on their head and jaw. They can most easily be identified individually by the black and white colourings on the underside and edges of their tail. Instead of teeth they have baleen plates, which hang down from the upper jaw. They cannot chew, so food must be small enough to fit down their throat.

Humpbacks have 14-35 throat pleats, which are longitudinal folds of skin running from below the mouth back to the navel. These pleats enable the whale’s mouth to expand immensely when feeding. By closing the mouth and using its tongue to force water back out, the baleen plates act as a sieve to strain out water and keep in food.

Another method of feeding is “bubble-net feeding,” where whales, alone or in groups, blow bubbles in a circle around fish to condense the school. Some recently studied humpbacks around north east Vancouver Island also demonstrated a technique called “trap-feeding,” where they open their mouths near the surface and wait for fish to enter, often using their long flippers to direct them.

In 2003, working as a kayak guide in Johnstone Strait near Telegraph Cove, humpbacks appeared scarce. Since then I’ve witnessed a significant population increase. Last summer was even more heartening, with sightings daily. Humpbacks were one of the whale species hunted along our coast; Coal Harbour was the last commercial whaling station operating in British Colombia, closing in 1967. Humpbacks were not documented around north east Vancouver Island until the early 80s. Since then, they have made a significant comeback.

Still, threats remain. Scarring is evidence that humpbacks are getting entangled in fishing gear and/or injured by vessel strikes. We have no idea how many whales die annually from these injuries.

The Marine Education and Research Society (MERS) studies humpback whales from the upper Strait of Georgia and beyond northern Vancouver Island, and has been documenting the return of humpbacks since 2003. The extent of their work would not be possible without the contribution of photos from naturalists, boaters, and others who care. It would not have been possible for me to know how many different humpbacks I saw last summer without the help of MERS confirming the IDs of my own contributions. I saw 52 different humpbacks in the waters around Campbell River last season.

Which humpbacks will return in 2019, and will they be new to the area? I look forward to getting back on the water to see what, and who, this summer will bring.