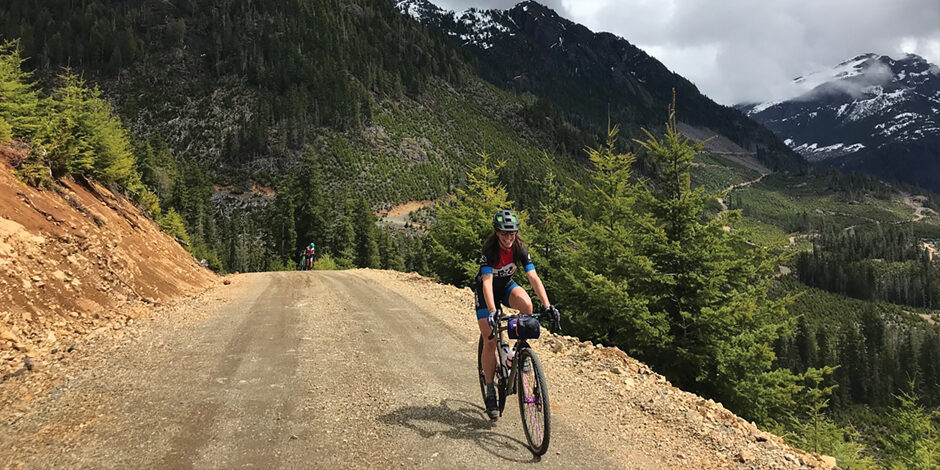 THE RISE OF GRIND

Gravel bikes are bringing rhythm and cadence off the road and back into the wilderness.

There are many ways to spin a wheel. Even within each discipline of cycling—BMX, mountain and road, to name a few—the designation breaks down further. The most current and exciting form of cycling is a bastard child of mountain and road. Gravel riding brings off-road-capable bikes onto the many routes spider-webbed across forest service roads, mining access spurs, and even singletrack.

Riders have started to notice that gravel riding gives them scope—something other bikes don’t. Cumberland-based kilometre-crusher Erica Spizawka says, “I do it for the adventure. I don’t ever do 100 kilometres on any other bike, but there’s something about gravel riding that makes you want to just get way out there. No plan needed.”

From the long, flat spin and grinding climbs of the many logging mains of Vancouver Island to the spur roads that sometimes lead to treasure and sometimes nothing at all, the adventure that comes from rolling on gravel cannot be understated. Sure, you’re not getting gnarly or sending gaps, but the bikes are capable of riding technical trails when needed, and otherwise allow for long distances of meandering exploration. They differ slightly from sketchier, less comfortable cyclocross bikes by having a more balanced, lower bottom bracket height and longer wheelbase.

“When you ride a mountain bike, it doesn’t feel complete unless you’ve had a good, fun descent,” says Spizawka. “When you ride gravel, you don’t care about the elevation, no matter how long you are out there for. You just go.”

Getting way out there means being prepared, though, both for distance and for disapproval. You don’t get a lot of love riding a gravel bike, especially on Cumberland’s network of burly trails. There’s something about drop bars and skinny tires that evokes dirty looks from even dirtier riders. Some Comox Valley bike shops even refuse to sell them. It’s like the residual hatred that once existed between roadies and fat-tired riders has risen again, but this time the mountain bikers are the dicks. And it’s the gravel grinders on the margins.

I get it. I grew up riding here, before the Comox Valley’s singletrack was in Cumberland. In 1993, trails were mostly on the far side of Comox Lake, and every Saturday and Sunday the parking lot at the dam would be full of bikes on cars. From Tomato Creek to Bevan Trail, we soaked up muddy singletrack and laughed at Lycra-clad roadies on our long ride home to Merville. It was immature.

Spizawka gets it, too. “I raced motocross, so watching cyclocross guys running around in Lycra seemed hilarious to me. I swore I’d never do it,” she says. But then her brief encounter with cyclocross became the gateway experience that led to gravel: “I couldn’t handle being on my uncomfortable ’cross bike for more than 30 minutes, but the day after I got my Naked [she rides a custom titanium gravel rig from Quadra Island-based Naked Bicycles], I went on my longest ride ever.” The curly bars had hooked into her. Now she understood the cult of Lycra a bit better.

Getting out on a gravel bike is especially gratifying if you spend most of your time on the bikes British Columbia (BC) is most known for: trail bikes, many of which lean towards the modern “enduro” style, meaning they’re built for a relatively slow ride up and gravity-punishing speed runs down. Gravel is a fresh take, unshackled from the rolling resistance of the wide, knobby tires—and ass-saving suspension—of a mountain bike. A gravel bike flows swift and light, and when you step on the pedals, it gets up and goes like a throttle.

That being said, it cannot shred rooty, steep singletrack, hence the gravel denomination. But it’s this that encourages you to be free from the constraints of close to home. Light and nimble means you can go fast and far.

But gravel will probably always be a bit uncool in the eyes of most. Perhaps all the judgement stems from misunderstanding. A modern gravel bike is far from a road bike, or even a cyclocross rig. Mine has 50-millimetre-wide tires; they’re fatter than the Tioga Psycho rubber we ran on early-’90s mountain bikes. It has hydraulic disc brakes, a full-carbon frame and forgiving carbon fork, plus a dropper post. In short, it’s badass. By most measures, the top-tier gravel bikes of today are better mountain bikes than what most of us were riding in ’90. (I’m still not selling my mountain bike. Neither is Spizawka.)

Until you’ve swung a leg over one, you’ll never know the sheer exhilaration of a solo gravel rhythm and the solace it brings. In fact, many gravel riders lean towards the healing solitude of the rough, open road. “I’m a really social person and the thought of spending five hours on my own wouldn’t normally be enjoyable,” says Spizawka. “But time flies. Where does this road go? Let’s see.”

Indeed, let’s see where this goes.