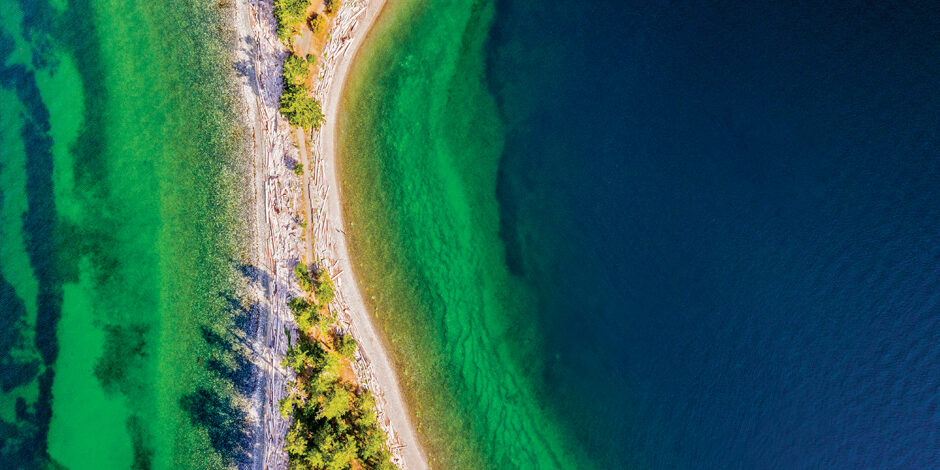 THE SEA IS RISING

It’s hard to get excited about something measured in millimetres. But ignoring climate resilience is no longer an option.

If you stand on Saratoga Beach and look out at the water on a calm day, the Salish Sea appears silent, steady, and as timeless as the earth’s orbit. However, the oceans are changing, albeit at a rate that is imperceptible from year to year.

A recent report from the University of Waterloo studying the effects of global warming on oceans predicts the sea level on Vancouver Island will rise at a rate of four millimetres per year. It sounds negligible, but, over the long term, it’s not. Though conservative estimates peg sea level rise at half a metre by the end of the 21st century, the province is telling communities to prepare for one metre. According to the Waterloo researchers, Canada is already lagging in efforts to make our seashores and coastal communities resilient to sea level rise.

Around 13.5 per cent of Canadians—roughly 4.8 million of us in 2016—live within 10 kilometres of the coast, which measures a whopping 247,007 kilometres. In British Columbia, more than 60 per cent of residents live within 10 kilometres of the tide line. Seaside cities and rural areas can expect to see widespread coastal erosion and an increased likelihood of damaging storm surges. Coastal estuaries, around which many BC communities, including Courtenay and Comox, are built, are also at risk.

The takeaway message from the Waterloo study is that we—meaning all levels of government—need to act and plan now to minimize potential impacts.

The problem is how to make it a priority.

“Perhaps the greatest challenge in Canada, and globally, in preparing for climate and sea-level rise along the coast, is a limited sense of urgency to act,” note the authors of the Waterloo report (emphasis in original).

It’s like the story of the frog in a slow-to-boil pot of water: change is so incremental that we don’t pay attention to it. But if this past year of record heat waves, catastrophic forest fires, and devastating floods has taught us anything, it’s that ignoring climate resilience is no longer an option.

“It was an extensive project,” says Robyn Holme, long range planner for the regional district. “We mapped for a range of scenarios from minor flooding to extreme flooding and storm surges.”

Flooding is top of mind these days. Atmospheric rivers have suddenly become a regular part of our weather dialogue. In November 2021, more than 200 Comox Valley citizens and stakeholders attended a regional district-hosted public information webinar about the strategy. It took place while the province was reeling from floods across the Lower Mainland and Southern Interior, which experts predict could become the costliest natural disaster in Canadian history to date. The flooding put a punctuation mark on the webinar, to say the least.

Tamsin Lyle, an engineer with Vancouver-based Ebbwater Consulting and one of the top flood experts in Canada, is leading Phase 2. As a keynote speaker at the CVRD event, Lyle made some important observations about where we are today, and where we need to be in the future, in terms of sea level rise preparation. Underlying everything is the fact that most of our settlements and cities have been built on the assumption of a stationary climate.

We know the climate is changing, but, according to Lyle, scientific uncertainty and gaps in local knowledge about risk add to the challenges of planning. What does that mean for the Comox Valley? The good news is that roughly only 0.5 per cent of CVRD land is at risk from coastal flooding. The bad news is that low lying, seaside neighbourhoods in areas like Little River and the K’ómoks First Nation reserve lands could face significant flood and water damage.

It’s more than property and infrastructure at risk: shoreline ecosystems and biodiversity are also under threat from climate change and sea level rise. The next step for the regional district is where and when shovels will hit the ground—literally.

A variety of adaptation and mitigation efforts are needed. These can range from engineering solutions, like shoring up manmade dykes and building breakwaters, to nature-based approaches like beach nourishment (adding sediment to shore up existing beaches) and habitat revegetation to make shorelines more resilient. There is also a very probable need to rethink future seaside development. None of these solutions is a fix-all; some have drawbacks; and most are expensive.

But as 2021 demonstrated in a big way, we can expect a lot more of what flood expert Tamsin Lyle calls “angry weather.”

We simply can’t afford to wait and do nothing. 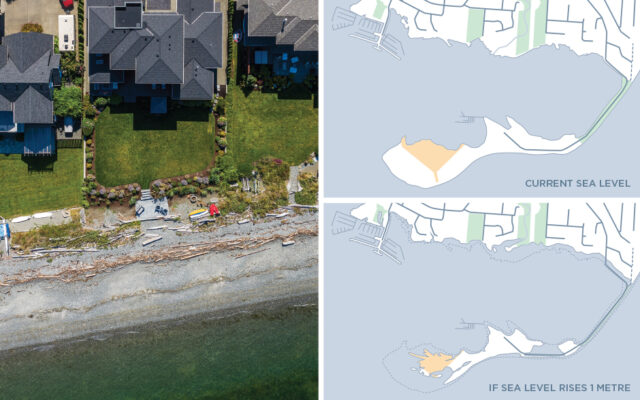