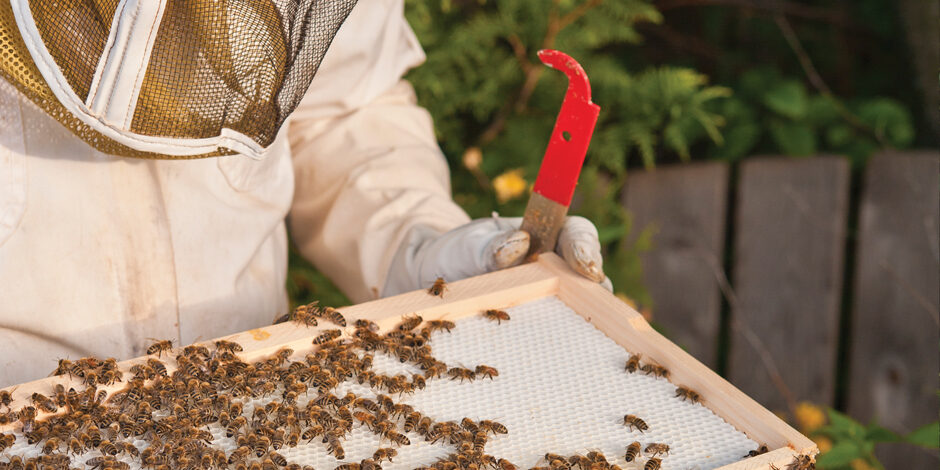 THE SEASONS OF BEES

The art and science of beekeeping.

There’s money in honey (sometimes), and for several beekeepers in the Comox Valley, keeping bees is a full-time occupation that supports families—no mean feat. For others, it is a valuable component of small farm operation.

But bees are under stress due to parasites and environmental damage, along with all the other reasons we’re in crisis right now. As of late, beekeeping seems more like a hospital ward than a flower-filled meadow. But the work being done by small-scale beekeepers is encouraging, and local honey is a gem in Valley agriculture. There are around 1,000 managed colonies of honey bees in our valley—about a sixth of all the colonies on Vancouver Island.

Winter is the most stressful time for bees; not all colonies survive. Some beekeepers try to console themselves for their losses by invoking old adages like “only the strong survive” and “it’s natural selection.” However, cleaning up dead colonies is always a sad affair. Beekeepers love their bees.

Early spring is a “fingers crossed” time for beekeepers. However, it’s also a time of hope. Before COVID-19, beekeepers would gather at YVR on early mornings in March to collect packages of bees arriving from New Zealand and other countries. The beekeepers wouldn’t have seen each other in a while, so there’d be coffee and catching up to do, and much excitement in the air.

International bees were still flown in last year; they just got picked up by socially distanced beekeepers. New bees will arrive again this year and move into their Island homes; they’ll feed on sugar syrup until more forage is available for them.

These imports provide local beekeepers with a head start on the season. The beauty of this method is that these packages of bees can be divided to create more colonies (what beekeeper doesn’t want more bees?) well before our home colonies—if they survive—get moving in April.

What’s more, the genetics of an international colony can become local by the simple process of requeening. Many small-scale bee breeders are producing lines of locally adapted survivor stock, and pockets of neighbourhood beekeepers work together to produce local bees.

Devoted to the art and science of beekeeping, Island beekeepers have long aimed for self-sufficiency when it comes to their bees. And to a large measure, they’ve succeeded. We know that bees that are adapted to their own microclimates do better than imports. Island beekeepers are proud of their bees, and many believe our relative isolation and favourable climate make this a special place for them.

By mid- to late April, Comox Valley bees are busy building their populations. They need a workforce to collect the nectar to make honey and provision their colonies: honey bees live in their colonies all winter long, so they need a full pantry. Forty-two days after the first eggs are laid by the queen, the first foragers venture forth from the darkness of the hive to begin the work of food collection. Maple, arbutus, and many other trees on the edge of the forest help them kick off their nectar-collecting season.

As the days melt into summer, bees are drawn to blackberries and flowers blooming on hedges and in gardens. Near farms, bees sometimes gather nectar from blueberry and cranberry flowers. Because summers now tend to be hotter and drier, nectar production is less reliable than it used to be. There are years (or times of year) when there’s barely enough nectar in the flowers to keep the bees alive even one more day. Beekeepers save many a colony from starvation.

Before we know it, it’s queen rearing season, which coincides with swarm season (where bees reproduce on a neighbourhood level). Nectar flows and everything is happening all at once.

May and June are the grand months for bees. The air smells like honey and bees hum with contentment. Sometimes, on warm moonlit nights, they will forage even after the sun sinks below the horizon, using compass orientation.

After the summer solstice, it’s time for the fireweed, truly the event of the beekeeping season. Island migratory beekeepers chase the fireweed blossoms in the clear-cuts and meadow flowers in the subalpine. The best locations are coveted—sometimes secret—and often secured by exploration and negotiation with logging companies and landowners.

As the days get shorter after the fall equinox, bees rest for a while, dreaming their bee dreams. Queen bees start laying eggs again around the winter solstice. With climate change, the natural cycle which includes winter dormancy seems to be getting shorter. But bees need their rest.

Meanwhile, beekeepers, endlessly inventive, are tinkering in their workshops. With wood stoves burning, they design new equipment, make modifications, and read through last year’s bee journals, while keeping an eye on the weather forecast.

The saying “know your farmer” applies to beekeepers, too. So go find one! They enjoy talking about bees and, really, a conversation with a beekeeper should be required for life learning. You may hear about bees’ importance as pollinators: “No bees, no seeds, no farms, no food.” But most of all, you’re likely to discover that it’s okay to love bees, but not because of any service they may offer humans. Just love them for the amazing creatures they are.