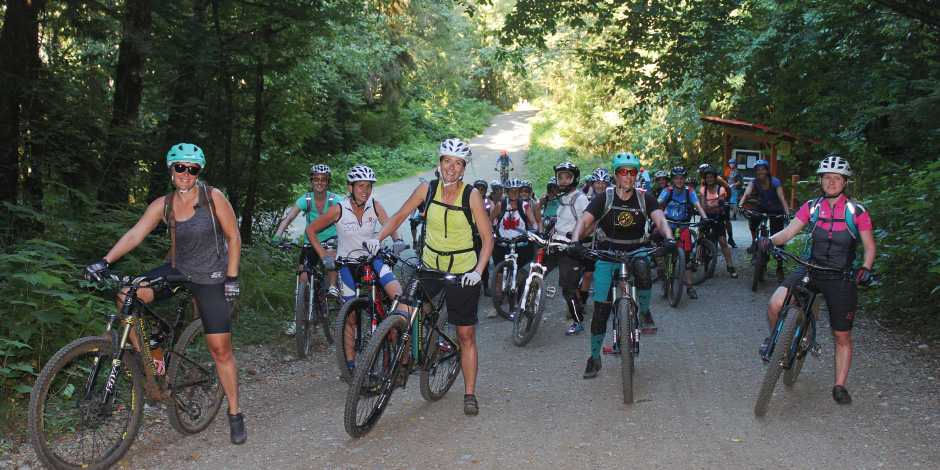 The Sisterhood Of Bikes

Roll into Cumberland on Wednesday evenings from late April to early October and you will spot a group of about 30 – 40 women gathered in front of The Riding Fool Hostel, ready to take on the trails of Cumberland. I first heard about this women’s only group of mountain bikers, a part of the United Riders of Cumberland (UROC), when I first moved to the Comox Valley back in 2008. I loved riding, but didn’t have much experience mountain biking, so a friend encouraged me to check out the ladies rides with her. We showed up at 6pm nervous and excited that first Wednesday, and came onto a scene that was extremely organized. There was a volunteer leader, and a beginner, an intermediate, and an advanced group, each with options of different ride plans. It was an intimidating ride, and I was definitely out of my comfort zone, but I had a blast! Afterwards we joined the ladies for the famous beer and burger deal at The Waverley Hotel. From that night on, I was hooked, and I have hardly missed a Wednesday since.

The UROC ladies ride wasn’t the first name for the group. Four women, who called themselves the Bruised Beauties, first began the rides back in 2005/2006. Their names are Dionne Brown, Alice Grasby, Carol Sparks, and Dana Starritt. The group started small, so small in fact that Dana was the one and only lady who showed up on the first of the rides. By the second and third week the group grew by 100%. There was quickly a need for more leaders, with women like Audrey Kuypers filling the void for beginner riders, and 10 years later she is still giving back. Barb Milley, aka “Fearless Leader,” was also there from the beginning and continues to play a big role each week. A number of other women also work behind the scenes to keep the rides organized—managing the ever-growing email list, and sharing weekly ride plans and trail etiquette in a fun and informative way.

A couple of years later, the Bruised Beauties decided to come under the umbrella of the well-recognized organization UROC. This allowed our group to get insurance, and to have a support network that extends to and from female and males rides in our community with bike mechanical clinics hosted by UROC, Dodge City Cycles (DCC), and Trail Bicycles, as well as skills clinics hosted by the DCC/UROC guys. We have been hosted by Campbell River riders, shuttled up Forbidden Plateau by Trail Bikes, and travelled to Denman and Hornby Islands, the Sunshine Coast, Moab, and a number of other mountain biking meccas.

At the end of every season someone volunteers her home for the end of the year potluck, with draw prize donations from local Comox Valley shops. Some of us can’t quite get enough of our Wednesdays, and keep the group going through the winter. If we can’t ride bikes, we come together for other adventures such as skiing, snowshoeing, yoga, and yes, even knitting has happened. UROC brings us together for a number of reasons: to challenge ourselves; to encourage one another in our passion of riding; and to be connected as women riders. I see women rise above what they didn’t think was possible, and the stoke from that accomplishment is inspirational.