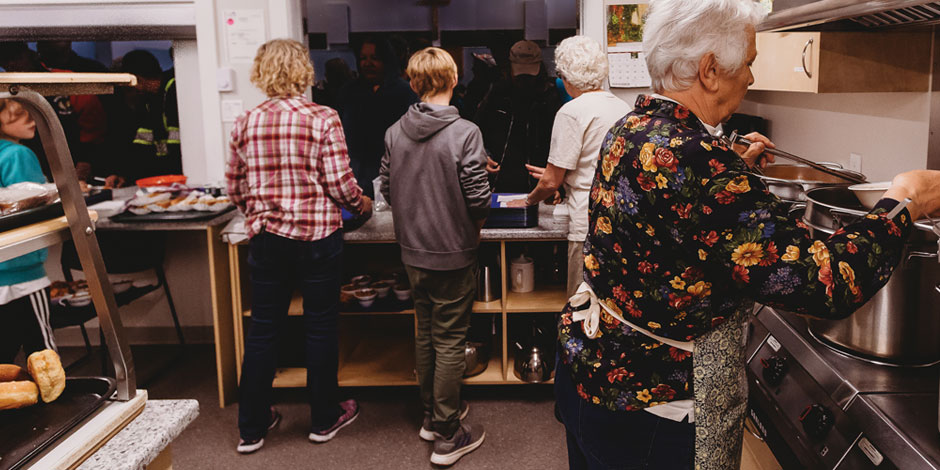 Turns out there is such a thing as a free lunch. Five days a week, the Sonshine Lunch Club in Courtenay provides a nutritious meal and a gathering place for people who need a little help.

It’s a Tuesday, and when the doors of St. George’s United Church hall open at 11:30am, Gail, who is 70, comes in with about 100 other people for the Sonshine Lunch Club’s free hot lunch. She’s been coming five days a week for many years. Gail sits near a big man who she describes as a friend, someone she often collects bottles and cans with.

She says the soup kitchen is her lifeline, and her friend nods his head in agreement.

On this day, the nutritious meal is being cooked in a newly renovated kitchen by about a dozen Salvation Army volunteers, led by their pastor Kevin Elsasser, who is also the current president of the Sonshine Club. Providing the free hot lunches is a collaborative effort. St. George’s, in downtown Courtenay, has hosted the lunches since 1996, and many Valley churches take turns preparing and serving. On Mondays, it’s the turn of the St. Vincent de Paul Society of the Roman Catholic Church; on Tuesdays, The Salvation Army; on Wednesdays, St. George’s with St. Peter’s Anglican Church of Comox; on Thursdays, St. John the Divine Anglican Church in Courtenay; and on Fridays, the Bay Community Church in Comox with Courtenay’s Central Evangelical Free Church.

The Sonshine Club receives grants from organizations like the Comox Valley Foundation, the City of Courtenay, the First Credit Union, and the Comox Valley Regional District, as well as contributions from individual and business supporters. Groups like the Comox Valley Food Bank and LUSH Valley provide some of the food. On this particular Tuesday, there are several tables of donated squash, carrots, kale, Eatmore sprouts, breads, desserts, and fruit.

St. George’s minister, Ryan Slifka, explains that the soup kitchen was founded over 20 years ago as a response to a need seen with the Valley’s unemployed, underemployed, and homeless people. “Christ has always had a special relationship with people on the margins,” he says.

Pastor Slifka knows of people who have been coming every day for 20 years, while others may use it only temporarily or once in a while. He says he recently received a letter from a former Valley resident now living and working in northern BC. The young man expressed his gratitude for the soup kitchen, which he said was a necessary support allowing him to seek employment while he lived here.

Two years ago, the Sonshine Club began a food pantry two days a week and a coffee and snack drop-in three days a week. Minister Slifka says these services provide an important place of connection for the 35 to 50 people who regularly drop in. The organization also hosts four celebratory meals throughout the year at Thanksgiving, Christmas, on Good Friday, and during the summer in a community park.

For Gail, it’s clear the soup kitchen and its services are essential for her socially, emotionally, and for her survival. She lives in BC housing, she’s on a limited pension, and she has diabetes. “Some months, I go three weeks without any money at all.” As she’s about to begin a bowl of chili and a sandwich, Gail tells me, “Without this soup kitchen, I wouldn’t survive.”