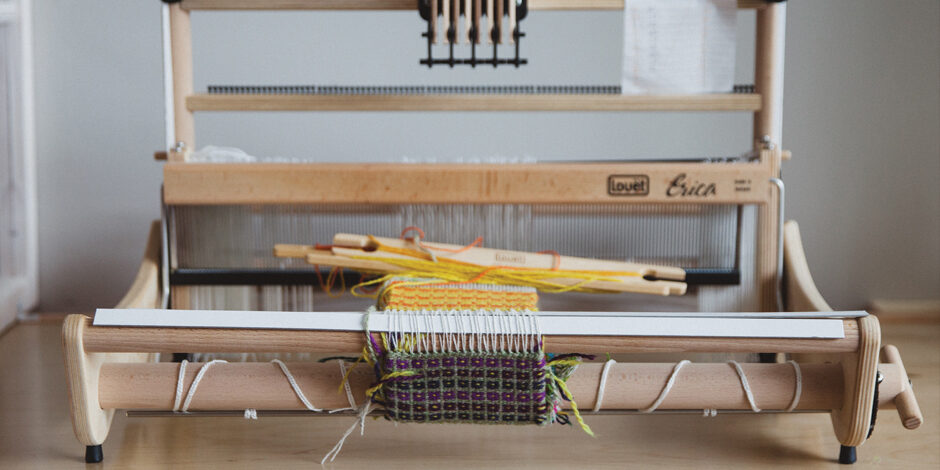 THE THREADS OF RECOVERY

My adventures used to involve adrenaline. Like the time I hitchhiked from Kamloops to climb Mt Forbes in Banff National Park, or when I took a job flight nursing in the Yukon wilderness. In my mind, adventure was supposed to scare you a little—or a lot—and how you dealt with the challenge showed your true self.

I’ve worked as an emergency-room nurse, a flight nurse, and an intensive-care nurse. My adventures in textiles began as my career in critical-care nursing was winding down, when I realized both my work and my outdoor pursuits had been taking a toll on my nervous system in the form of burnout… with a side of PTSD.

Weaving is a practice where fibres are stretched over a loom, or other frame, to create tension (the warp). Then, other fibres (the weft) are threaded over and under the stretched-out warp threads.

Repeat the process until you have cloth, and wow, once you see what you’ve created, the dopamine hit to the brain is pure gold.

The direction of humanity changed dramatically with the invention of cordage and weaving. For the first time, humans had the technology to weave nets for fishing, make rope for tethering an animal, or create garments to wear. The String Revolution, as Elizabeth Wayland Barber describes in Women’s Work: The First 20,000 Years, is right up there with the discovery of fire in its importance to humans. Before then, we were regulated to climates that were warm. Woven clothing allowed us to walk out of Africa and migrate to colder places.

Weaving became a revolution in my own life—a world of solace, healing, creativity, and colour. Every time I started weaving, the rhythmic over, under, over, under of the threads induced a state of flow. The constant chatter in my brain ceased, replaced with a peaceful silence in which to start healing my nervous system. The resultant calm followed me into my everyday life.

When I looked into what was happening to my nervous system on a physiological level, I discovered that weaving—like any activity where you find flow or are “in the zone”—increases your vagal tone. The vagus nerve is a superhighway that sends messages between the organs and the brain. It tells the body when there’s danger and turns off the stress response afterwards, returning to a balanced, relaxed state known as homeostasis. The more toned your vagus nerve is, the faster you recover from a fight-flight-freeze response.

Like many people who work in a high-pressure environment, my nervous system was constantly in a state of high activation. Hyper-vigilant and super-anxious, I was always in fight-flight-freeze response mode and unable to return to homeostasis. And my usual methods for coping, like biking and skiing, weren’t helping the way they used to.

My nervous system found rest, for the first time in years, when I began weaving. The brain loves repetition and patterns. So counting threads, preparing a warp, threading the heddles, sleying the reed, and throwing a shuttle of colourful weft thread gave my brain something to focus on, and I began to heal.

My anxiety lessened and I was able to process the job-related PTSD I’d been ignoring. I could tell my nervous system, “There’s no sabre-tooth tiger coming for you.” Then I’d say, “Count these threads, ’cause these dish towels aren’t going to weave themselves.”

As my interest in weaving culture grew, I sought out mentors in New Mexico, New Hampshire, Guatemala, Haida Gwaii, and Vancouver. When I travelled to Guatemala to learn the ancient craft of backstrap weaving, I didn’t know any Spanish and my teacher, as it turned out, didn’t speak English. Yet we communicated through the weaving.

Later, I took a Coast Salish weaving class with Chief Janice George and Buddy George of the Squamish Nation (Sḵwx̱wú7mesh Úxwumixw), where I learned the Coast Salish weavers’ belief that all weavings already exist in the spirit world. These textiles then choose the weaver to manifest through. The notion of each textile as a separate entity that chooses its weaver made me fall more in love with the humble creations coming off my loom.

To say I’m obsessed is an understatement: I’ve fallen down a weaving rabbit hole, and now I’m bringing people with me. I created Woven Community and Textiles, where I teach the foundations of weaving, and its healing aspects, in my workshops. My business tagline? Adventures in Textiles.

Giving myself permission to leave my nursing job and attempt to make a living teaching weaving was a process of letting layers of my identity fall away. I’m no longer the critical-care nurse who rides bikes and skis; I no longer seek the adrenaline I once longed for. That part of my life had unravelled until it was threadbare. So I wove myself a new one. 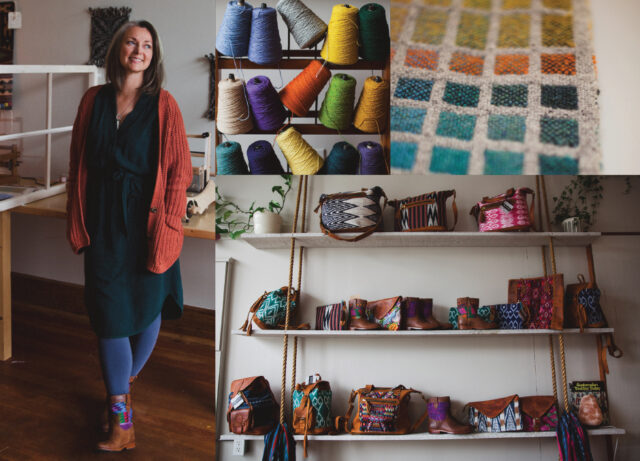