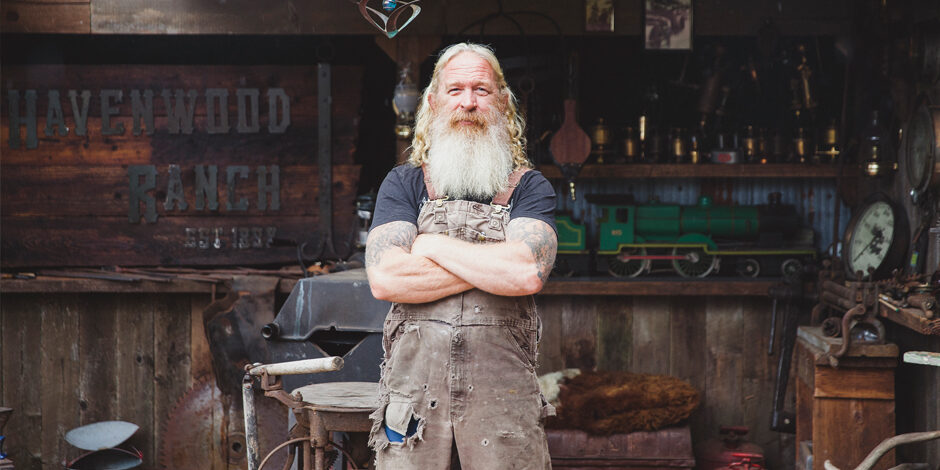 Forging ahead in uncertain times.

After the year that was 2020, we’re starting to see light at the end of the tunnel—a return to the way life was before COVID-19 struck—but we are left with the scars of surviving a global pandemic.

Although we weren’t immune to the virus’ effects, those of us on the Island were somewhat sheltered from hospitals overrun with patients and lockdowns that lasted for months on end.

That said, some of us got sick; some lost family and friends. Businesses shut down, and jobs were lost. Yet amid the tragedy, there are stories of great resiliency, creativity, and for some, opportunity for change—albeit only after suffering a great loss.

This is one such story.

In the years before COVID, Sean Eastman was many things. He’d be the first to tell you he’s a jack of all trades, yet master of none. He was born in Vanderhoof and raised in the BC Interior. He wasn’t “much into sports,” and, despite being accepted into art school, he went to work as a logger. Over the years, he worked in sawmills, fixed heavy equipment, ran his own forestry business, and eventually landed on the Island rebuilding tugs.

When the pandemic was declared, Sean and his partner had just returned from Mexico. He was without a job, and for once, he couldn’t find one. Out of necessity, he started fixing friends’ broken-down weed whackers and lawn mowers, often for barter or trade. By word of mouth, his penchant—and gift—for mending the community’s possessions spread, and the notion of becoming the Village of Cumberland’s “Modern-Day Tinker” took shape.

Although not a welder by trade, he was asked to take a look at a friend’s Boler trailer and eventually agreed to rebuild the metal frame. The project ended up being a much larger job than expected, but the result was confidence inspiring and cemented the foundation of the Cumberland Tinker.

In days gone by, a tinker was someone who would travel from place to place fixing and repairing metal tools and utensils, sharpening knives, and fixing items thought to be irreparable. Tinkers were tinsmiths by trade, which meant they worked primarily with cold metal, although, at times, they would use a hearth to heat their material, like a blacksmith uses a forge, so it could be more easily shaped. With that in mind, it’s somewhat fitting that Sean has built himself a backyard forge, where he works using antique hand tools.

He describes forging as a throwback to simpler times and an opportunity to create cool things. “I like making metal do what I want,” he tells me, referring to the firing, bending, and hammering that goes into mending and creating wrought-iron fences and gates, signposts, and hooks.

Leaving Sean’s property through the massive timber- and iron-clad gate he built, I’m struck by his ingenuity, and not just because of the impressive way the gate swings shut behind me using a medieval-inspired counterweight.

It’s also because, at a time when the economy was uncertain and Sean’s personal future looked ambiguous, he found a way both to provide an economical service to his community and explore the creative side he gave up on years ago.

And from that, he’s forged a unique identity for himself as the Village Tinker.