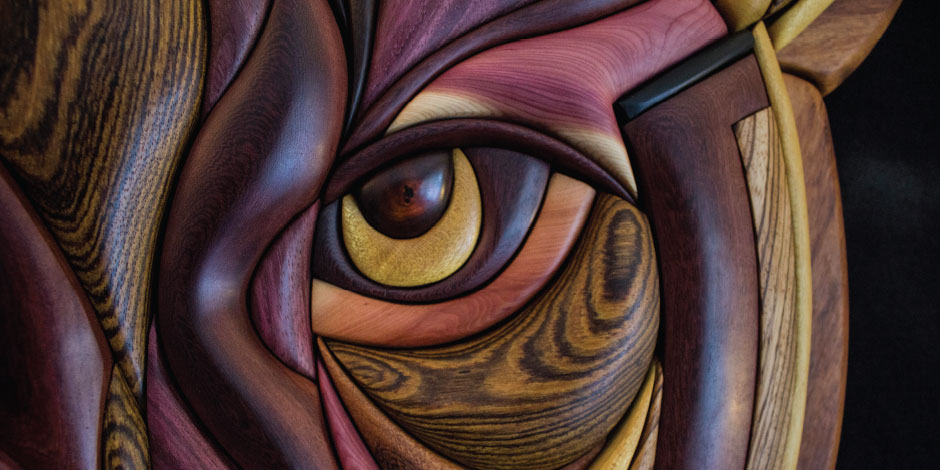 Other gallery photos by Michael Drummond

Four artists collectively known as the Wood Vibe Tribe are refreshing woodworking traditions and using the power of camaraderie to share their own identities.

There is a well-known Western idiom that “work is a means to an end.” The rat race, stuck on a treadmill, pushing a rock uphill; these are familiar expressions employed to describe our North American work lives. We want our children to be happy, so we tell them to find work that inspires, and to follow their individual passions. But as adults, we often fall short of our own advice.

In 2011, Andy Woodsmith’s father passed away and left him a workshop. Woodsmith was struggling with a nine-to-five salesman job at the time. He found solace in his father’s array of woodworking tools and drew inspiration from tragedy. In 2014, he began making intricate arbours and garden art before discovering intarsia, the technique in which the artist fabricates individual sections of wood chosen for the colour and grain pattern and combines them to create a three-dimensional mosaic. He began to eke out a living as a self-taught wood worker by selling pieces at festivals and via word of mouth.

While refining his skills, Woodsmith met Brad Rhadwood, and the two became fast friends. Rhadwood, the nomadic “wood whisperer,” was known for using raw wood instead of canvas to paint visionary art. As the story goes, he had the idea of creating a tribe, a band of woodworkers who would share ideas and resources and draw from each other’s inspiration to create art with intention. This vision has progressed into what is now known as the Wood Vibe Tribe.

Christopher James Boux, who happens to be the only trained woodworker of the foursome, joined the group in 2015. At the time he was struggling with what he perceived as the static and linear nature of finishing carpentry. He first redefined himself as the “driftwood artist,” but was drawn to the intricate, jigsaw-like modern day intarsia that Woodsmith was creating. The artists share ideas, support and resources, and while many partnerships can suffer from a perception of shortage, Boux, who also goes by the handle “Open,” explains that their collaboration comes from a place of abundance.

More recently the tribe acquired Kyle Vibes, an apprentice with a strong desire to learn the craft from this group of modest artisans. Currently living in Port Alberni and learning the craft of wood joinery, Woodsmith tells me that Vibes quickly grasped their concept of turning mindfully sourced wood, dirty offcuts and forgotten scraps into objects of desire.

Anybody who has worked with wood will tell you that for all its strengths, it can be unpredictable. Drive a nail too close to the edge of a cedar deck board and it will split. Leave a two-by-six out in the rain overnight it will never be straight again. Perhaps their self-proclaimed title of “Wood Wizards” is not far from the truth. There is something magical about removing layers and finding beauty in scraps of wood sometimes fraught with inclusions and imperfections.

There is a spark in the eyes of these artists as they passionately explain how they machine, sand, and polish layers from often flawed materials. It’s not hard to imagine their craft allowing them to peel back their own layers. “Open” tells me their art has rewarded them with a lack of self doubt and allowed them to inspire and communicate with the world. They have also gained the satisfaction of being engaged in work that brings them peace and, above all, happiness.