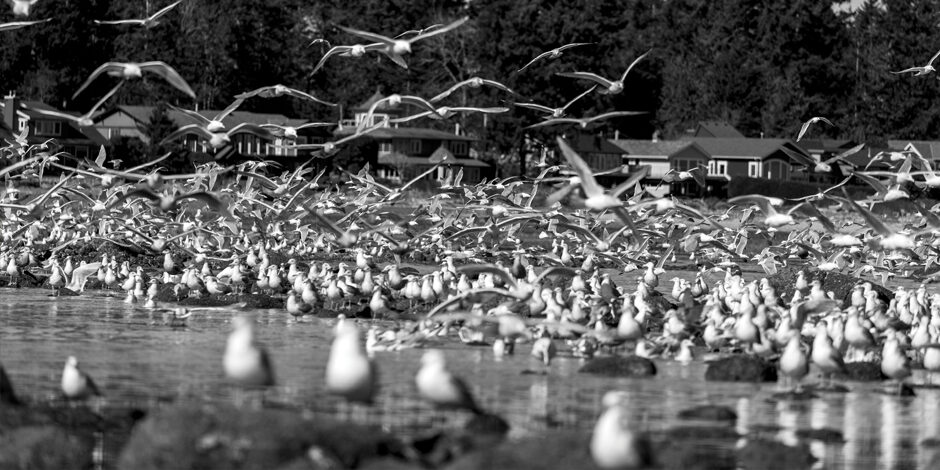 They’re among our most plentiful bird species, but seagulls don’t actually exist.

Deep in the heart of Utah Mormon country, in a place called Temple Square, sits an unusual statue known as the Seagull Monument. It may be one of the few monuments where life imitates art in an endless self-fouling image.

It commemorates the “Miracle of the Gulls,” which occurred in 1848. The year before, as Mormon settlers arrived in the valley that is now home to Salt Lake City, they planted a skimpy crop late in the season. It furnished them with enough seed that in the spring of 1848, the new colony of polygamists was on its way to self-sufficiency.

That is, until in classic biblical form, a plague of crickets (in this case katydids) arrived in the fields in a feeding frenzy. Were they perhaps sent out of spite that the polygamy was too much? Or not enough? We can only speculate.

In any case, the devoted followers of Brigham Young got down on their knees and prayed with all their might, and an unlikely saviour was sent for their penance: the California gull (Larus californicus). As hungry as the swarming katydids were, the gulls were hungrier: they smote those New World locusts over a two-week period, saving the colonists’ crops. This is why the California gull is the state bird of Utah.

In common circles, you could be forgiven for off-handedly mentioning the phrase “seagull;” however, if you do so in birding circles, you’ve announced yourself as an ignoramus of the lowest form.

There is, quite simply, no such thing as a “seagull.” There are only gulls.

There are 54 different species of them distributed on every continent across the world in habitats ranging from coastlines to interior dry desert—although one could be forgiven for assuming they only survive around open maw of garbage trucks at the local dump. They’re generalists, which means they tend not to have any specialized feeding behaviours. Their morphology is such that they are equally adept at swimming, flying, and walking, although they are not much for deep diving. This allows them to eat both freshwater and marine fish, and just about everything else, including carrion, seeds, fruit, McDonalds refuse, and so on.

There abounds a certain snobbery among ornithologists whereby superior status is obtained through knowing precisely which (very-similar-looking) gull species is which. Get yourself a book with photos and prepare for the wild ride, exclusive cocktail parties, and invites onto yachts should you become proficient in their taxonomic identity. For those who are utterly pining to join in on this pedantry, here are the eight varieties found on our coast:

GLAUCOUS-WINGED GULL: These are the ones you primarily find at the dump. (“Glaucous” is just a fancy word for grey.)

THAYER’S GULL: They love salmon. Despite breeding in the Arctic, they are numerous around here, second only to the glaucous-winged gull. Have deep, mysterious eyes and flamingo-coloured legs.

CALIFORNIA GULL: Smaller than a herring gull. Larger than a ring-billed gull. If all three kinds aren’t in a lineup, good luck.

RING-BILLED GULL: No points for guessing how to identify this one.

MEW GULL: Cute and little. They like to perch on spruce trees. Short neck and orange-rimmed eyes.

BONAPARTE’S GULL: The smallest gulls around. Helpfully have black heads.

Just to complicate matters even more, sometimes you’ll see a gull that doesn’t fit any pictures found in the birding books, which means it’s a hybrid.

That’s right, gulls are generalists in more than their feeding habits. Perhaps we humans have more in common with gulls than we realize, except that gulls typically tend to be monogamous for life. I wonder what the Mormons thought of that.