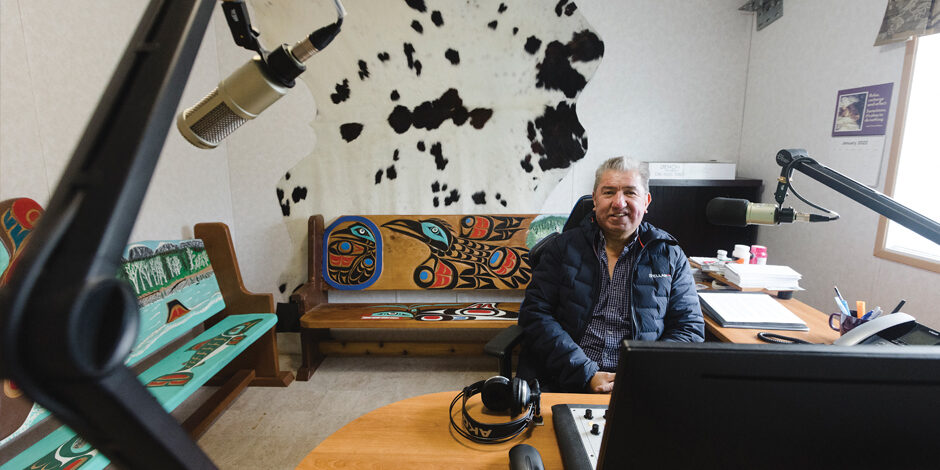 TUNED TO THE COMMUNITY'S FREQUENCY

100.7 The Raven’s diverse team revitalizes a language and works to heal a nation.

A lone modular office building with blue vinyl siding rests at the end of a gravel driveway on the edge of Homalco First Nation near Campbell River. From a wide, meshed antenna protruding from its shingled roof, a signal from within radiates south to Mount Washington.

From there, a mountainside tower boosts the signal, broadcasting the Ayajuthem language, along with contemporary and classic country music hits, to radios hundreds of kilometres away. At 100.7 megahertz, The Raven’s invisible radio wave is about three metres tall—similar in height to the proliferous alder trees sprouting around the station.

Inside, station manager Michael Pedersen sits at his desk behind a laptop. When he first arrived on site in October 2021, the station had been in operation for just two years, and he was surprised by the professional sound coming from this humble modular.

He inspected all the gadgets that make a radio station work—the five computers, transmitters, and processors—and nodded in appreciation. Over the last two decades, he has built three radio stations from scratch in communities across the country, so he knows a thing or two.

Like how it’s not easy to start a new station in Canada. The Canadian Radio-television and Telecommunications Commission (CRTC) holds firm conditions of licence, and the formality during the required public hearing is similar to appearing in court.

On a low desk in one of the station’s backrooms sits a reel-to-reel Akai GX-230D. The audio player was manufactured in the mid-1970s, not long before “the government forced us out of Church House,” says Homalco Chief Darren Blaney. “They took the fishing licences away and quit building homes. Then shut the school down in 1985 so anybody with a child had to move from the community.”

The Homalco people dispersed to various far-flung communities before they were able to negotiate a land trade for their current site in Campbell River, a winding boat journey past scraggly islets and through notoriously strong tidal currents from their original community on the mainland.

The device plays recordings of the Ayajuthem language (which belongs to the Homalco, Klahoose, K’ómoks, and Tla’amin nations) captured nearly 50 years ago. A large part of the Raven’s language and technology team’s job is to ask families around the village for any recordings they might have tucked away.

Malachi Joseph, a Homalco resident and team member, helps to digitize these recordings and hosts the “Keeping Our Word” feature, a 60-second spot playing the Ayajuthem language six times per day between the twangy beat of modern country songs.

The contrast between country music and Indigenous language programming is perhaps best represented by the eclectic arrangement of decorations in the broadcasting room.

Behind the broadcasting desk, where program director Matt Morris hosts “Matt in the Morning,” a white and black splotched cowhide stretches across the wall. Below it sits an ornate bench designed and carved by Chief Darren Blaney and his uncle and cousin.

Down the hall in the main entrance, a raven swoops through the sky in another carving designed by the trio. Blaney says he began carving with his grandpa at five years old, “helping out with the dugouts.”

Next to the carving, in the vibrant newsroom, an array of succulents waits for sunshine by the window. Newsreader and broadcast producer Josie Patterson, a Cumberland local, begins their day here at 6 a.m.

Patterson applied for a position to digitize language recordings, and one day Pedersen asked them to read an ad, and from that, the job evolved into announcing the news. “We can teach anyone the ins and outs of radio,” says Pedersen, “but we can’t teach passion. Josie has that.”

The Raven strives to achieve what Pedersen calls brand and community capacity building: using the station as a platform to help build and communicate local initiatives, from bottle drive fundraisers to promoting artists and events.

Unlike other radio stations owned by off-island media conglomerates, profits from The Raven stay on the reserve. The Nation started the station to raise money to revitalize culture and language, and “to overcome the aftermath of loss from residential schools,” says Blaney.

Although he would like to see open-ended trauma treatment become available to address the impact of residential schools, Blaney believes the federal government “will never put up the funding, so First Nations have to do that on our own. Our own source revenues will help us to get beyond [intergenerational trauma].”

“Healing must come first,” says Blaney, adding, “Our economic development will go no further than our healing.”

And so, beside the watchful alder trees on the edge of the Homalco First Nation, the humble modular radiates music and language to listeners across the Homalco traditional territory, as well as hope that a Nation can heal and a people can prosper.