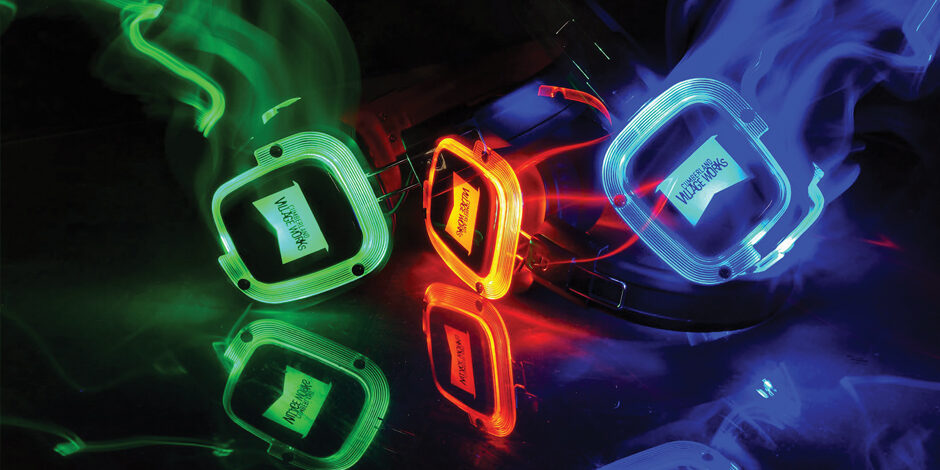 TUNING IN TO NEW OPPORTUNITIES

I first heard of silent disco headphones while working in Toronto’s music industry several years ago. When the wireless, light-up headphones came up in conversations about the latest festival craze, my interest was far from piqued.  The idea of being separated from the energy of music as it swirls around a venue and raises everyone up to dance just didn’t appeal to me.

Four years later, after one daughter and a move out west, I finally found myself ready to re-evaluate this apathetic view.

One night, after a long shift at Atmosphere Gathering (the local summer festival now titled Cumberland Wild), an encouraging friend handed me a pair of headphones and I walked over to the big circus tent where the “silent disco” was taking place. As I entered, I didn’t yet have mine on, but even still, the “sound” of silence almost knocked me over. It seemed shocking after years of going to dance parties that were so loud.

It was uniquely powerful. A sea of lights on headsets danced before me while three DJs played music from lit booths up above.

The headsets glow in three different colours (blue, green, and red), each reflecting a different DJ’s channel, and dancers choose which DJ to tune in to. It becomes a battle for the DJs to convert as many of the headsets to their channel as possible, hence the colourful sea of lights.

The headphones settled on my ears and my first thought was one of surprise at their comfort. Then, suddenly I was pulled into another world, as if jumping through a sci-fi style portal. The sound was so intimately within my own head that it felt as if I could truly dance as if no one was watching, despite hundreds doing just that around me. I found myself grinning ear to ear. I will be back, I thought.

Jump forward to the “everything is cancelled” year of 2020, where these headphones have found another purpose. It turns out they are the perfect tool for socially distanced events.

Cumberland Village Works, the local company that runs the festival, owns several hundred pairs of silent disco headphones and has started renting them out. Initially they were rented for private parties as a way for people to celebrate together, yet apart, “quietly,” in the streets and in the mountains.

Then Rev. Ingrid of Cumberland’s Weird Church started using the headphones for guided walks and sermons in the woods. She loves having a pre-recorded musical soundtrack while simultaneously speaking to everyone spread out around her.

Word spread fast through our eager-to-evolve community. Meaghan Cursons hired the headsets for her Cumberland After Dark walking tours, adding an extra COVID-safe level of spookiness to her Halloween events.

Next up was the Comox Valley Art Gallery’s Walk with Me: uncovering the human dimensions of the overdose crisis project in the fall of 2020. People took guided audio walks through the back alleys and parks of Courtenay while listening to recordings of the stories of people with lived experiences in those neighbourhoods. As organizer Sharon Karsten puts it, “The headsets were a game-changer; they helped share these stories close to our hearts.” The project has received numerous accolades and the museum is discussing plans to run it again, or something very similar.

As the world around us continues to introduce new challenges, many tools and technologies have the opportunity to take on a whole new life. These evolutions are a plus in this strange new world. Now that we’ve been pushed to look for possibilities, they’re endless.

What would you do with a pair of silent disco headphones? Keep your ears open for the next opportunity to try some out!