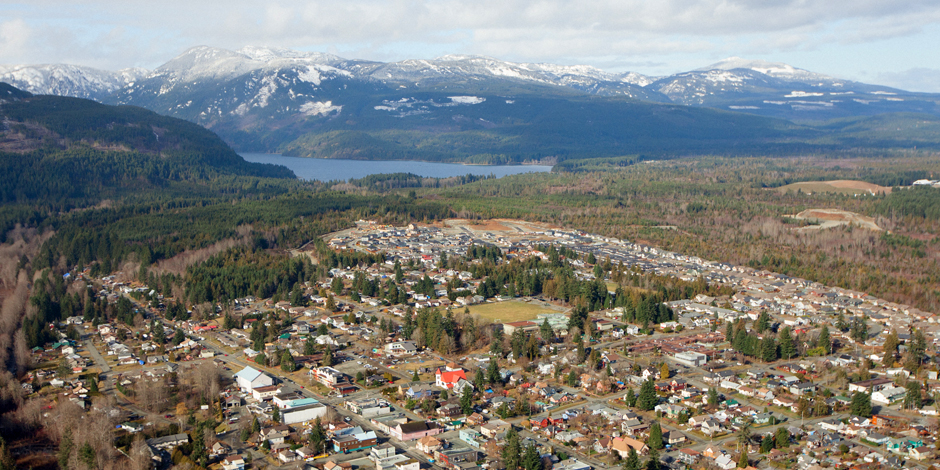 TURNING DOWN THE TEMPERATURE: CUMBERLAND 2040

The second in our series imagining how the Comox Valley’s communities could look 20 years from now.

At exactly 10:24 p.m. on May 1, Mother Earth breathed a small sigh of relief. Economists at the provincial Ministry of Climate Change Prevention say that was the minute the Village of Cumberland became the first community in BC to achieve carbon negative status.

“With our coal-mining and logging history, we’ve put our fair share of carbon dioxide into the atmosphere,” says Oscar Tessmann, Cumberland’s mayor. “Twenty years ago the mayor, council, and residents of the village decided they were going to do something about it.”

In 2020, Cumberland was at a crossroads. The village was growing fast. House and rental prices were rocketing upwards. The budget burden fell predominantly on the residents, the majority of whom commuted out of town for work, and old infrastructure was creaking under the load of growing numbers of residents and tourists. With a new Official Community Plan (OCP) in the works, there was an opportunity to use the goal of going carbon negative by 2040 as a catalyst for deeper, not just green-coloured, change.

“Before that OCP, most people thought tackling climate change was about sacrifice,” says local historian Jim W. Mackay. “But people in Cumberland quickly realized it was an opportunity to create a better community in every way.”

The OCP built on plans already in play to diversify the village’s economy. The village’s Economic Development Committee encouraged the establishment of an ecosystem of small, food-focused businesses and a weekly farmers’ market supplied by local farms; these initiatives, coupled with the village’s existing retailers, created the equivalent of a full-service grocery store. The arrival of a boutique hotel complemented the hostel, vacation rentals, and campground already on offer. Adventure-focused, with a bike wash and storage, shuttles to Comox Lake and the Mount Washington Four-Season Resort, and meeting spaces for community groups and events, it fit right in.

Another big play was the light-industrial development on Bevan Road. Strict zoning rules attracted innovative, low-footprint, and locally focused businesses. It’s become a hub for local food production; today, six companies in the business park process goods grown on farms throughout the Comox Valley. Forestry is another value-added sector in the business park. Furniture and cabinet makers and engineered-timber manufacturers use wood from trees selectively harvested in a community-owned wood lot and milled at a specialty sawmill on Royston Road. A cannabis edibles producer, an alternative energy supplier, and recyclers who sift through the landfill also joined them.

The concentration of businesses created opportunities to cut emissions. In partnership with the Village, the park tapped into underground heat to create geothermal energy and harvested methane produced by the dump for electricity and heat production. It was one of the first industrial developments in BC to mandate solar panels on the walls, roofs, and windows of every building.

Equally important to reaching the carbon negative goal were the more than 500 jobs the industrial park created. “The light-industrial park is the biggest reason why 95 percent of Cumberland residents work within walking distance of their home,” says Tessmann. But he also acknowledges that couldn’t have happened without steady changes to the village’s bylaws.

“I think something a lot of people overlook in Cumberland’s transformation to sustainable was the action of village residents,” notes Mackay. “When you look back, almost every change started from the grassroots, with citizens coming forward with fresh ideas. And at the same time, they recognized it was important to preserve the village’s history.”

Dunsmuir Avenue doesn’t look that different today from how it looked in photographs from 2020. The only franchise in town, the Esso gasoline station, was replaced by a solar-powered electric-vehicle charging station in 2030. Strict building and heritage rules meant new buildings and redevelopment of old properties stayed true to the village’s historic look. New zoning protected trees and encouraged the creation of trails and paths that link everything together. Even as the population more than doubled in the last 20 years, parking and traffic didn’t become an issue, Mackay says. Cumberland never had a stoplight and, with autonomous cars and falling car ownership, the village is steadily removing stop signs.

Back in 2020, Cumberland was already a destination for lifestyle migrants, couples, and families fleeing the city for a place that offered a more affordable, family-friendly, outdoor-oriented, and community-focused life. Over the past two decades, this trend has continued, resulting in some notable successes.

The Cumberland Community Forest Society continued with their land-protection efforts and have now protected the entire south side of Comox Lake, including all the land above the village’s drinking water at Allen Lake. The mountain-bike trail network, too, grew to include more than 400 kilometres of trails, reaching the spine of the Beaufort Range and connecting to trail networks in Qualicum and Port Alberni. Last year the first Grade-12 cohort graduated from the Cumberland Community School’s outdoor program. Cumberland’s live-music scene remains the most vibrant in the area; several Juno-Award-winning artists hail from the area. A redevelopment of the community centre in 2030 included a 300-person theatre that holds live concerts, film screenings, and plays.

“What all that cultural development brought is a more diverse community,” Mackay says. “Of all the changes over the last 20 years, I would argue, the multi-cultural makeup of residents is the biggest shift.”

As Vancouver and Victoria became more culturally diverse, so too did the people who fell in love with the west coast lifestyle. That’s carried over into the outdoor world thanks to efforts by various groups, including Parks Canada, BC Parks, bike and climbing clubs, environmental organizations, and retailers like MEC. The people using crags, trails, and wilderness are far more diverse than a decade ago. Many of them followed the well-trodden path of lifestyle migrants moving to Cumberland. The most recent census identified residents from 20 nations, up from fewer than 10 in 2016. The village celebrates the ethnic shift by encouraging community events, from the long-running lantern festival celebrating Chinese New Year to First Nation pole-raisings in Village Park, friendly international cricket matches, and art exchanges.

Affordable housing was one of the hardest issues to tackle, but the village has been able to retain a spectrum of incomes and ages by adopting innovative solutions that extend beyond densification and carriage houses. Cumberland was one of the first BC communities to approve rezoning to allow three or more tiny homes on a lot. Co-living and co-housing developments followed, with communal infrastructure like shared kitchens, gardens, tools, and storage. And the Village made it possible to keep vulnerable residents in town by creating a housing authority that helped create live-work artist co-ops and dorm-style senior living. Demand for more energy-efficient homes helped drive new, smaller-footprint developments with duplexes and fourplexes instead of the large single-family homes of yesteryear.

“Not everyone thinks of housing and diversity as part of a village’s carbon footprint, but how and where we live plays a huge role in our emissions,” says Tessmann. “We had to think holistically.”

Progress has driven Cumberland’s journey to carbon negative, but just as important, says Mackay, was embracing the village’s past. “Cumberland has gone full circle,” he says. “Originally it was a resource town. We turned our backs on forestry and mining for a while, but then we realized to be sustainable we had to work with what we’ve got close at hand and make it better.”

“Today is a milestone,” adds Tessmann. “Getting here was not easy, so we’re going to celebrate. But we also know we can do more. Tomorrow we’ll get back to work.”