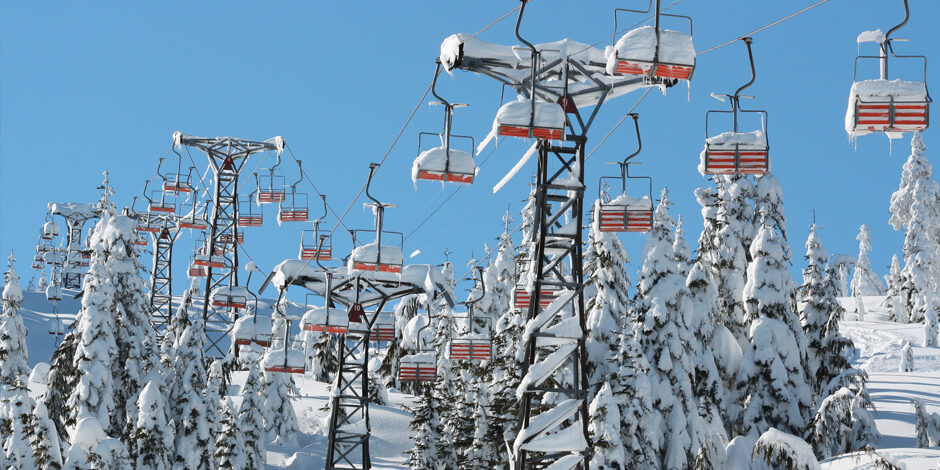 It was all fun and games ’til the roof caved in—but the former Wood Mountain Ski Park still delivers the goods.

Katherine Kirk suspected the roof of Forbidden Plateau’s day lodge was going to collapse. “One day, a woman in the ski area office said ‘Oh, look, there’s so much snow on the roof that the walls are buckling.’ I remember going up the chairlift and turning around to see all the snow on the roof and not one person had been up there to shovel it.”

The roof caved in the next weekend, still unshovelled. The legendary snows of ’99 had put an end to decades of fun.

Opened in 1966 as Wood Mountain Ski Park, Forbidden Plateau was the location of Vancouver Island’s first T-bar (1965) and chairlift (1972), and a jumping-off point for more than a few Van Isle-raised groms. Its legacy in the world of skiing and snowboarding is severely underrated.

If Mount Cain is Vancouver Island’s cannabis-and-climbing-skins hippie ski refuge, and Mount Washington is our mini-attempt at a mega-resort, then Forbidden Plateau was the Island’s family ski hill.

Part of Strathcona—the oldest provincial park in British Columbia and the largest on Vancouver Island—Forbidden Plateau was a gateway for many outdoor-loving men, women, and children’s first chairlift-assisted forays into the mountains.

As a teenager growing up in the Comox Valley, Kirk spent many afternoons riding the chairlift and T-bar that accessed the modest rise of Wood Mountain. Her father, Robert, was a businessman who helped build Glacier View Lodge and owned Courtenay Car Centre, but his passion, time, and money were more often poured into his role as one of the main stakeholders—and a director—of the mostly volunteer-run ski hill.

“There were silent partners and even other directors,” says Kirk, who owns Yummies and Gyros in Courtenay. “Dad was sort of [at] the forefront because he could fix anything. Dishwasher’s broken? He can fix it. He was just this hard-working guy who never stopped working.”

When supporting Forbidden’s overhead became too much for Robert Kirk, he had to hire help—some of whom didn’t understand what a wet west-coast snowpack can do to an old building.

And then came the Deepest Year Ever. The 1998-1999 ski season saw Mt. Baker, down in Washington State, record the most snowfall of any ski resort. Anywhere. Ever.

That year, Mount Washington and Forbidden Plateau received over 10 metres of snowfall. And Katherine Kirk was there for it all. “We’d ride up in the back of the Land Rover, you know, no seatbelts. No rules. Nothing,” recalls Kirk, who claims Logging Road as her favourite run of Plateau yesteryear. “We just had free range.”

Sadly, that was the year the lifts stopped spinning for good. When the lodge collapsed, “there was no insurance for any of it because it was in the park,” says Kirk. In 2002, a suspected act of arson reduced the lodge’s remains to rubble. It would never rise from the ashes.

Still, “my oldest son learned to ski on Forbidden and ended up becoming part of the provincial ski team,” says Kirk. “There are so many good memories.”

If the ski resort’s first three decades were all about family fun, then Patrick Kitto’s Jump Camp picked up the torch and put a forward-thinking spin on the Plateau legacy for the next 20 years. Kitto knew Plateau still had deep snow, fun-as-hell terrain, and a wide variety of features for snowboarders who wanted to catch air and have unhindered good times away from The Man.

“I had moved away. When I came home, I wanted to do an Island Camp of Champions deal,” Kitto says, referring to the wildly influential educational snowboard and ski youth camps that ran on Blackcomb Glacier from 1988 to 2017.

“I skied Forbidden growing up, snowplowing with no poles,” says Kitto. “When there were like five snowboarders in the whole town, I started snowboarding.”

The chill vibe of Plateau attracted Kitto and his friends. “The scene was all brown-bag lunches. My dad would drop me off and I could look up and see my friend Jer [Atkinson] in his bright neon jacket from the parking lot.”

Atkinson would help Kitto start the snowboard-focused Jump Camp in 1999, with “probably a dozen kids in three or four camps,” and, while it has remained small, otherwise it’s evolved as the organizers learned alongside the kids.

“We figured out more convenient and efficient ways of doing it,” says Kitto, laughing. “We used to run it in the winter, at the very top. We’d be shuttling and getting our sleds stuck a million times and kids would be sitting there wondering what the hell was going on.”

Now featuring six camps—during the more agreeable season of springtime—Jump Camp has become a uniquely Island-flavoured operation. While the pandemic sidelined five of six camps this year, the show will go on, including the annual Jump Camp Snowboard Drive, which benefits the Courtenay chapter of the Boys Club Network.

“We started doing it three years ago. We get boards and gear donated and we take them up the hill,” says Kitto. “Lots of these kids have never snowboarded before and are jumping and ripping by the end of the day.”

Despite the persistent—and incorrect—rumours that climate change no longer allows enough snow for Forbidden Plateau to operate, “If Washington has snow, Forbidden does too,” declares Kitto. “It’s had a few doozy years, but the elevation is only slightly lower.”

“Every winter weekend, there are 50 cars in the parking lot, and dads drinking beer, and moms and kids are riding toboggans, and they’ve got a big fire roasting,” says Kitto.

Indeed, whether the fun involves touring skins, snowboards, or toboggans, Forbidden Plateau has once again become a destination for those who don’t require a chairlift to have a good time. 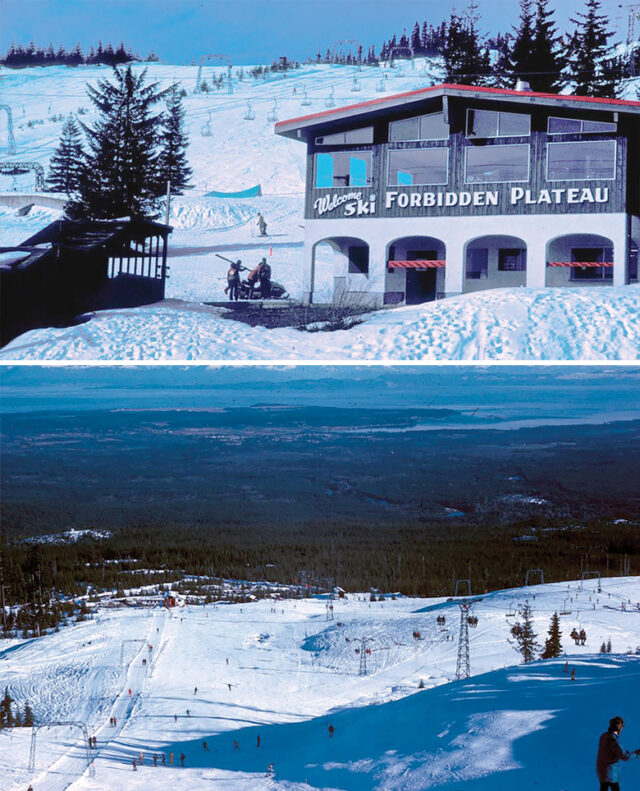