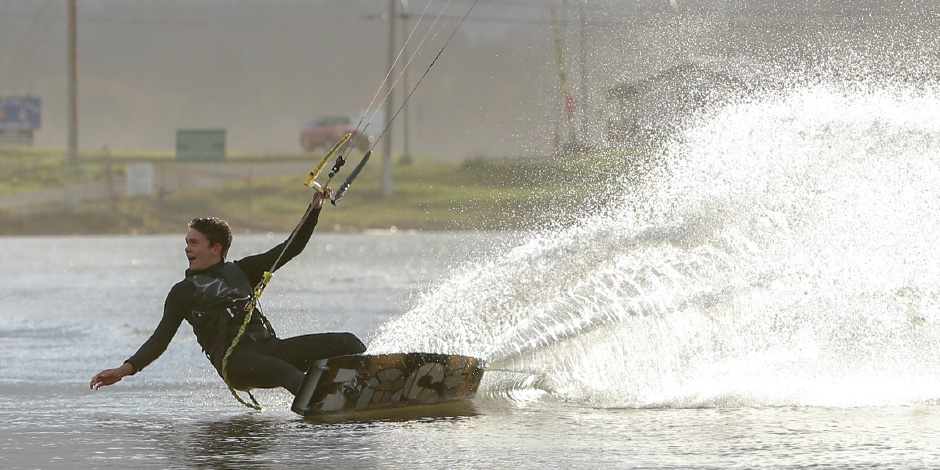 Taking flight on the water.

Fall, winter, and spring storms rolling in from the Pacific push strong winds up the Georgia Strait, where they’re funnelled by the mountains of the Island and Sunshine Coast, to find their peak here in the Comox Valley. This weather provides epic conditions for local all-season wind sport enthusiasts, windsurfers, and rough-water SUP (stand up paddle board) paddlers. The conditions are also spectacular for a growing number of kiteboarders, wetsuit- or drysuit-clad, who use a small board and a kite flying high above them on long steering lines.

These enthusiasts are attracted to steerable, or ‘traction’ kites, for the intense level of power that’s difficult to convey to the uninitiated, but I’ll try. When stationary, any sail or kite will generate lift or pull from the true wind provided by the weather.  As a craft moves and picks up speed, its wing, or sail, generates additional power from the apparent wind created by movement. Only a controlled kite, which can fly or sweep in a half-sphere downwind of the pilot, can generate a third component of wind over the kite. This third component can generate a massive surge in power, lifting a skilled rider off the water and to considerable heights. During descent, keeping the kite high provides support and glide. A quick dive of the kite just before touchdown, creates the final burst of horizontal pull required to land and ride away with speed. For the rider and any onlookers, the thrill of boosting a high jump, gliding a long way and then landing at full throttle, is infinitely exhilarating.

Kites can be ridden on the water with almost any shape of board. Paired with a surfboard, you can power out through the surf to catch and carve up waves on the way in. With a kite and skimboard, the jumps, spins, and board flips, resemble the tricks seen at a skateboard half-pipe. The newest rage is using a small board with a hydrofoil bolted to its underside. This set-up allows the kiter to glide several feet above the water’s surface while the hydrofoil travels unseen below. It’s a lot like low-level flying.  However, the majority of kiters ride a twin-tip, which is a bi-directional board, similar to a wakeboard or snowboard, as this shape does everything very well: jumping, carving turns, and riding fast.

Comox Valley kiteboarding participants range from teenagers to seniors in their sixties, as the only absolute requirement is to be a competent deep-water swimmer should a sudden wind-drop necessitate a swim to shore.  The strength required to hold on to the kite isn’t an issue, since almost all of its pull is transferred directly to the rider’s centre of gravity via a line connecting the kite’s power-and-steering control bar to a harness worn on the hips or waist. “It’s all about flying the kite,” is a common pronouncement when asked how it’s done. With good control of the kite, it’s almost like having a genie at your command to move you as you wish. But lose control of the kite, particularly in high wind conditions, and you may be pulled around wildly.  Fortunately, the design and safety features of modern kites have improved considerably in the past decade, making it easy for learners to shut down an out of control kite.

Given the power of a kite, it’s much safer to learn the sport with the assistance of a professional instructor. Kiteboarding lessons are given in the calmer summer winds by three schools on Vancouver Island, in two locations not far from the Comox Valley. At China Creek Marina and Campground near Port Alberni there’s Girl on a Board Kiteboarding School, and a bit farther away at Nitinat Lake (west of Lake Cowichan) you’ll find both Elevation and Strong Kiteboarding Schools. The Comox Valley is also the home base of a new kiteboarding and wilderness tour company, El Norte Adventures, that can guide and teach you kiteboarding in the fall, winter, and spring, on the less busy and frequently windy lakes of north Vancouver Island.

To see kiteboarding action up close, check the weather for south-easterly winds and a tide of 3M or higher and head to the lagoon at Goose Spit, as it’s the most popular spot to see riders cruising in flat water, jumping high, and working on tricks. When the tide is low, the lagoon is too small, so the kiting action moves outside of Goose Spit into Baynes Sound. Advanced kiters will often ride out into the Georgia Straight from one of the many beach access points along on our eastern coastline. You’ll often find kiteboarders at Air Force Beach and Kye Bay during lower tides, utilizing the northwesterly clearing winds that often accompany a high-pressure front in spring or summer.

So bring on the wild, windy weather of fall and winter that makes a day at the beach spent kiteboarding pure joy.