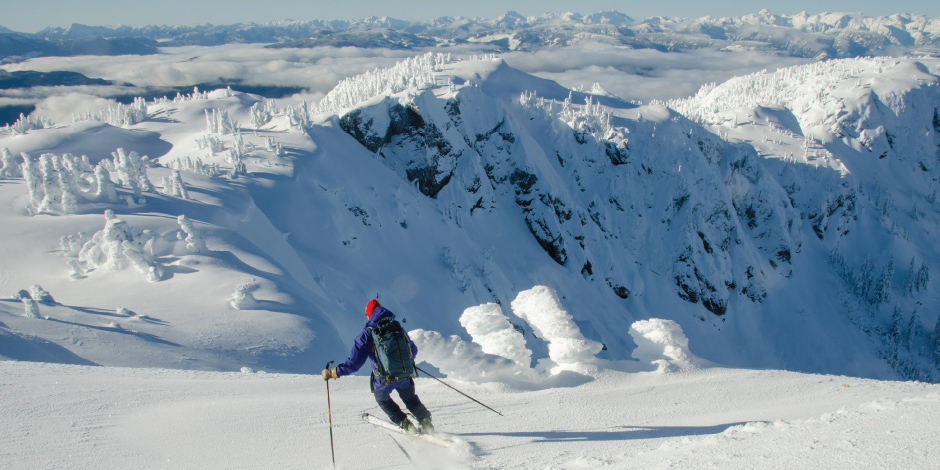 Okay, it didn’t have to end at JJ’s but it did. My able partner Guy Ridler and I booked a full day for our surgical Saturday strike on Mt. Myra’s north glacier. You never know – better to allow more time than not enough. It was mid February, and the skies were clear and crisp thanks to a classic northerly that whistled down the mainland fjords on the tail of a front that had delivered much needed precip to freshen our mountains. It was the perfect storm for backcountry success on Vancouver Island; a moist front followed by a cold one that would sublimate the slop from the snow and leave it sparkling with surface hoar. A skier’s dream. Guy and I pounced. The normally tedious access road that ascends steeply from the trailhead at Myra Falls Mine to Tennant Lake went quickly, with shin deep fluff atop a bomber supportable crust. Perfect travel. In an hour and a quarter we were beyond the lake negotiating the awkward bumpy terrain that leads to the 45 degree-plus boot-pack couloir that threads a cliff band, the feature that can kill a Myra attempt if snowpack stability is less than optimal. Skis off and strapped to the packs, we kicked steps into the powder and crust and in 20 minutes arrived on the ridge. Skis back on we meandered up the scenic southwest ridge past Sandbag Lake making great time and feeling strong. Four hours after leaving the car, we slid to the summit of Myra. The Pacific Ocean to the west sparkled as brilliantly as the inch-tall Rocky Mountain-sized surface hoar feathers, as enticing as icing on the snowpack. Far below the industrial scar of the mine with its mountains of tailings and rock waste looked surreal, as out of place now as when the BC Government decided in 1965 to reclassify a chunk of BC’s oldest provincial park, Strathcona, to allow mining. But, oddly that day the mine provided a fitting contrast to the beauty of our surroundings. We looked down onto the shaded north face of Myra. We had it to ourselves – a vertical kilometre of boot top glued to an immaculately smooth crust. It was then that I firmly realized that my move to Vancouver Island wasn’t a self-imposed exile to an island where skiing sucked but rather an introduction to a chunk of West Coast rock with its own unique characteristics, and some pretty cool skiing. For the backcountry skier, nothing comes easy on the Island. The terrain, bluffy, steep, and convoluted, is infinitely more complex and challenging than most other mountain ranges I’m familiar with. That’s a huge part of its appeal. There are no big U-shaped valleys that make for easy alpine access, or highways that deliver you to the foot of epic runs à la Rogers Pass. Instead, imagine pulling on the roots of old growth trees, and edging your ski boots on sloping slabs of verglas-covered basalt for hours as you battle from the valley bottom to the subalpine and alpine, where treasure lies.

It’s also a recipe for mini epics, of which I’ve endured many. Dave Silver and I once skidded windfall trees with the girth of beer kegs off the spicy Buttle Bluffs logging road with his ‘All Season Outdoor Player’ (the Japanese have a knack for curious English expressions) Delica, otherwise known as ASOP, just to access some turns on Mt. Alexander. And with Guy, my long suffering companion on numerous island forays, I once front pointed to the summit of Queens Peak after a melt freeze avalanche cycle had rendered terrain on all aspects virtually un-skiable. Nothing but a hellacious patina of granite-hard avalanche bed surface and stacks of frozen avvy debris as forgiving as a pile of rubble leftover from a building demolition. Every turn, an act of survival. By the light of a near full moon, we finally lurched back to the car 14 hours later and proceeded to Campbell River to gorge on Timbits. This time, after our relatively painless six hour car-to-car Myra outing, we ended up at JJs, for no reason whatsoever other than that we had time to kill, felt like hanging out and I enjoy the stark contrasts of life. We reveled in the kind of ski descent that leaves you euphoric, pumped to be alive. The bar was empty. The lonely stripper, sat down to talk to us. It was 2:30 in the afternoon. When we explained our day so far, she seemed to barely understand, or care. The world that we described was as alien to this dreary strip joint as snow is to Bangkok. She was much more interested to learn that Guy was a pilot. She started talking about a career change. We left quickly, emerging into the bright sun of a brilliant Vancouver Island winter afternoon. 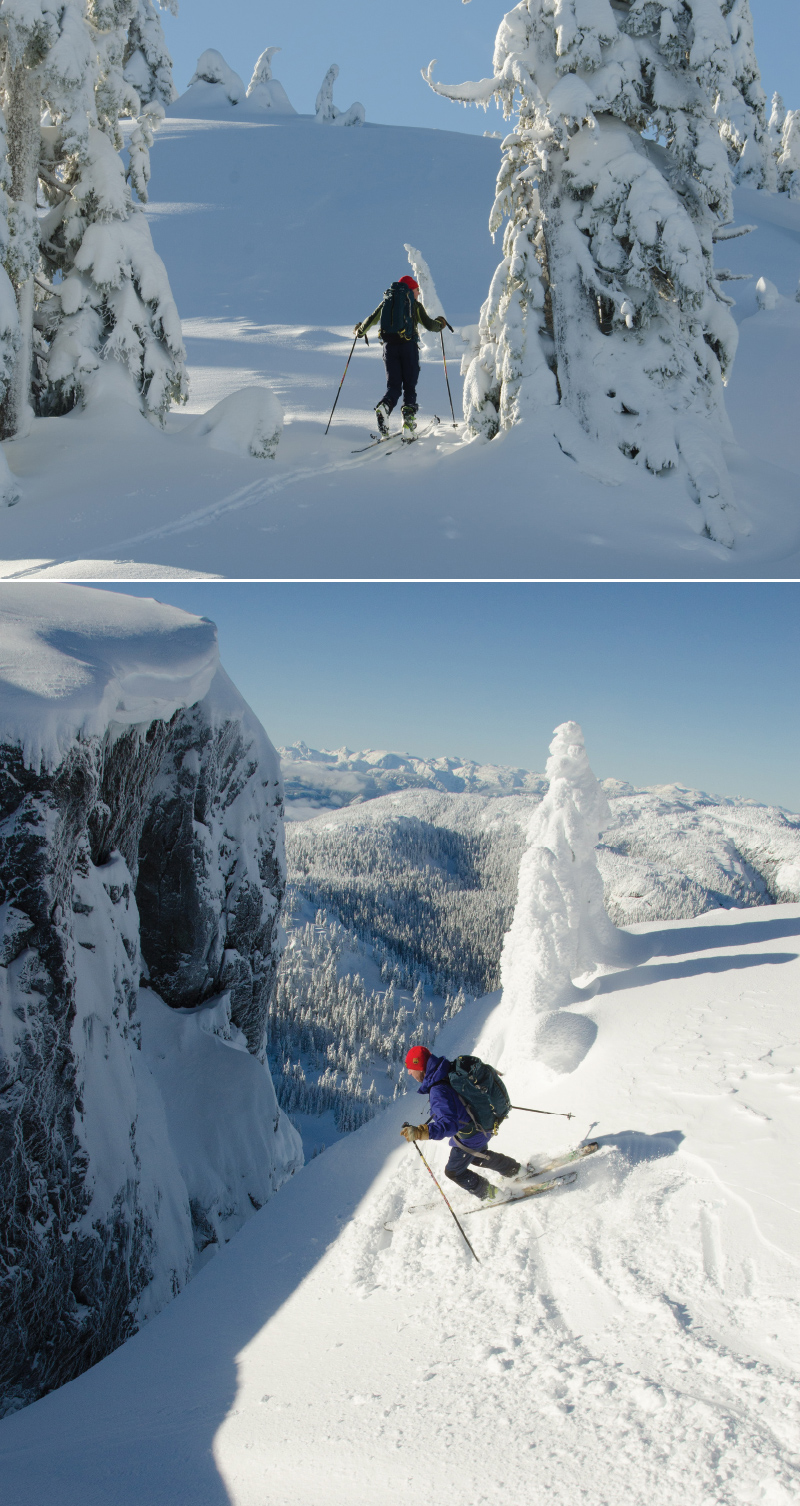