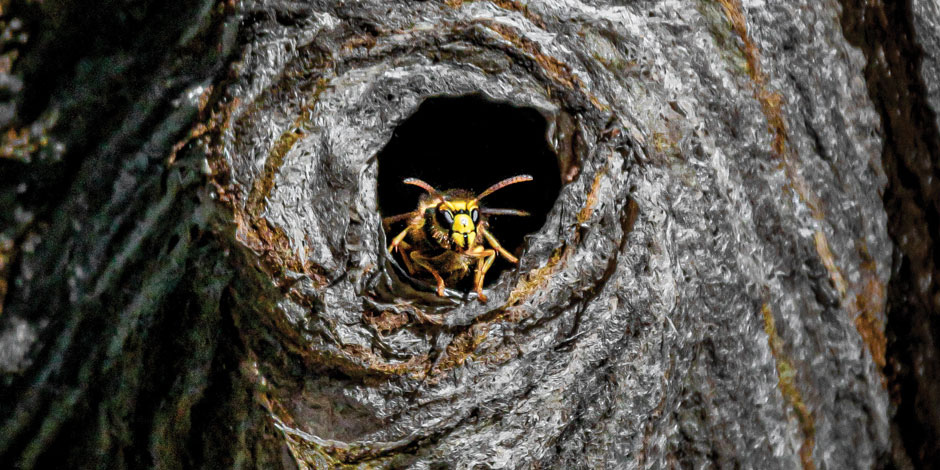 Wasps are a family of insects truly to be loathed. Or are they?

Before the headlines were screaming “Murder Hornets!!!” (officially known as Vespa mandarinia, aka “Baskin bees” for you Tiger King fans), every tree planter, summer wedding planner, and basically any Canadian who ever set foot outside knew about the wrath of the mighty yellow jacket.

I don’t know if anyone else has fond childhood memories of being duct-taped into a heavy set of clothes, holding a garbage bag open, while their father swung wildly at a volleyball-sized nest under the veranda with the broom. (There was no lack of excitement around our farm.)

When I was a tree planter, I would sometimes gaze out over a tree planting block, wondering what the mad dance was about in the distance, only to plunge my own shovel into a red-hot nest of aerial fury.

And what barbecue hasn’t experienced the joys of a wasp carrying off a chicken wing, or a full bowl of cherries, while Grandma rummaged through her purse for an EpiPen®?

To add to the fun, wasps (unlike bees) have the ability to sting repeatedly and seem to do so with abandon when they sense the colony’s defense pheromone in the air.

However, there is, in fact, quite a lot to like about wasps. While there have been some recent attention-grabbing headlines about the massive, invasive (and rare) two-inch Asian giant hornets, one must consider that the Vespidae family is very diverse, containing over 30,000 identified species.

Just like people, wasps can roughly be divided into extroverts and introverts. Some, like the swarming yellow jacket or the dreaded paper wasp, live in colonies; their venom is used for defense. But the majority of wasps are solitary in nature. Their venom is primarily reserved for hunting rather than defense.

Wasps can be distinguished from bees by their narrow waist, called a “petiole,” that separates the thorax and abdomen. They also have a much more pointed lower abdomen that houses the sharp business end of things.

Most people are hard-wired to run from that distinct buzzing sound unless they’re near an apiary with its promise of golden honey. I’ve been curious to see if my baby daughter can enjoy the sound as we sit beneath the rose bushes and California lilac, where bees and wasps abound. The current experiment is a success: the buzzing seems to calm her fidgety moments… at least until that fateful day when she will inevitably try to grasp the audible source.

Wasps are valuable pollinators as well as important predators and parasites of pest populations, which makes them the unsung heroes of the insect world. Without them, great caterpillar and twig-girdling beetle plagues would befall us. For example, Ichneumonidae (a distant family branch of the true vespid) has the ability to bore deep into trees with its ovipositor to locate unsuspecting beetle larvae munching through the wood. Like a scene out of Alien, our wasp deposits an egg within the beetle larvae. The egg then hatches and proceeds to eat its host alive.

Solitary wasps eat millions of kilograms of insects every year, and many farms and forestry companies will intentionally employ wasps as a method of biocontrol, instead of using chemical means to control pests. For example, Encarsia formosa is an important species used to control whitefly in commercial tomato greenhouses.

Social wasps are best known to us for ruining many a picnic. Early in the year, they are predacious, collecting protein to feed the larvae back in their colony. The larvae, in turn, are able to convert some of the protein into sugars that they secrete and feed back to the adults. How sweet is that?

But later, when the larvae all hatch, there is no more sweet, sweet sugar for the worker wasps. That’s when they start to look for flower nectar… or that delicious drink you’re enjoying on the veranda.

Rather than being annoyed, perhaps you can feel some sympathy. They’re just empty-nesters looking for a little respite from a hectic spring with the kids.