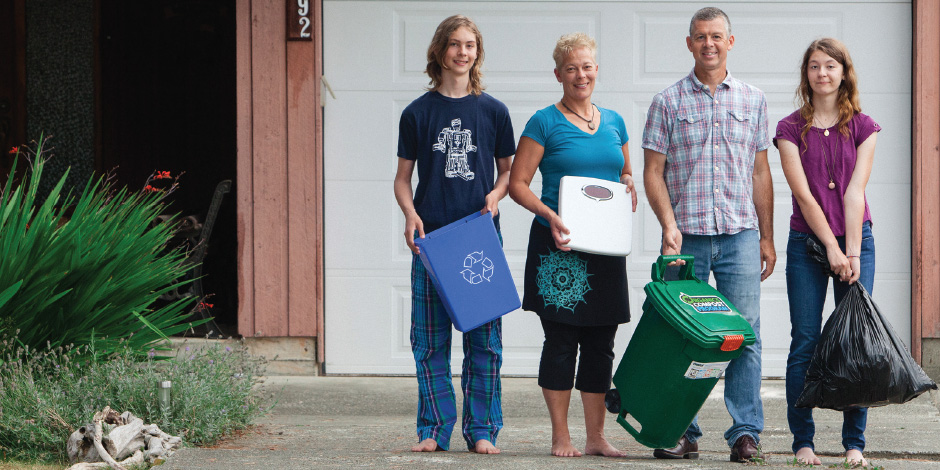 One family’s tally of their waste.

I’m standing at the sink, doing the dishes, washing out the plastic yoghurt pot before tossing it into the recycling. As the dirty hot water washes down the drain I wonder how much of a difference I’m really making. And my engineering training wonders how I could measure that.

Because what gets measured, gets managed, or at least better understood. The easiest measure is weight, a mass balance, because what comes in tends to go out; we take a clipboard and the kitchen scales, put them by the front door, and note both. In the door, it’s mostly groceries and some general household stuff, then out goes the regular garbage, compost, and that recycling bin.

The weighing wasn’t too tedious, and we soon had some answers. Every week, we create about 5kg each of garbage, recycling, and compost. Cumberland collects kitchen waste, so that and the recycling already reduce the landfill by two-thirds.

We also discover that weighing things makes us more aware of waste, and we choose things with less packaging. We’re missing some things though. All that food coming into the house is going somewhere, and we aren’t quite ready to start measuring that, but it does make us realize that we’re using about half a tonne of water every day.

At the gas pump, putting our weekly 50 litres of fuel in the car, I calculate where that 40kg of gasoline goes. It’s eight times our weekly garbage and much more carbon dioxide. If I buy 50 litres of gasoline and pour it on someone’s garden, I’m going to get in trouble, and pouring it into our atmosphere doesn’t seem much better.

Then, our car breaks down, suffering terminal transmission failure, and it’s time for the scrapyard. “Did you weigh it?” asks a friend with a wry smile. Our well-used Dodge Caravan averaged slightly less than 5kg for every week of its 12-year life, and throwing it away doubles our weekly garbage tally. In its short life, it burnt 30,000kg of fuel.

When the invitation comes for the biggest family wedding in the last 10 years, we really should go as it’s been a long time since we saw everybody. They are all on the other side of the planet, so the four of us fly to England for a month, burning up 1500kg of fuel and overwhelming any improvements we’ve made by driving less or recycling more. We don’t fly very often, but even if it’s only every two years, that’s 14kg a week, almost three times as much as our garbage. As green as I’d like to claim to be, as soon as I get on a plane, I might as well have bought the Hummer.

If we care enough to recycle and want to make a difference, we should buy less and travel less, celebrate what we already have, the amazing place we live, and the people around us. Much more fun than washing yoghurt pots–although we still do that.