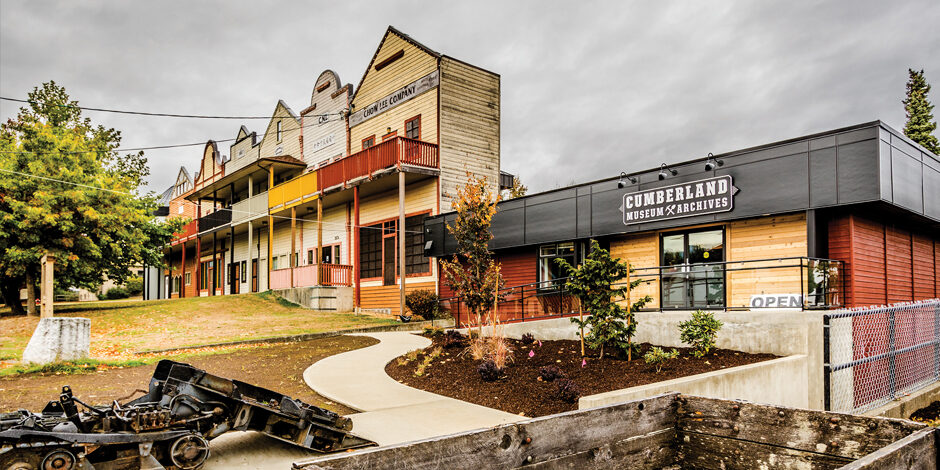 A few years ago, there was a local kerfuffle because a new sign on the Inland Island Highway proclaimed: “Welcome to Legendary Cumberland.” That’s the difference between old Cumberland and new Cumberland right there. Old Cumberland is coal mines and logging and labour history—new Cumberland is mountain biking and microbreweries and legends. There are legends here, no question, but to me, Cumberland is all about history. So. Much. History.

When the last coal mine closed in 1966, visionaries of the day decided the history of Cumberland was worth preserving and there were opportunities to develop new local jobs through tourism. Local businessman E.W. Bickle had donated the old Comox Free Press building at 2757 Dunsmuir Avenue to the Chamber of Commerce the year before. By 1969, after renovations, the front part of the building had become a tourist information centre. Behind it was a larger space that housed old mining equipment; farming and household implements; items from the hospital; a few models; and a lot of photographs—the first iteration of the Cumberland Museum.

It was an instant success, but lack of space and inadequate fireproofing in the old Bickle building hindered the possibility of expansion. There was no storage space for larger items of historical interest. In 1976, Norm Alexander, head of the Chamber of Commerce and a museum committee member, approached the provincial tourism minister about expanding the building; the conversation gradually turned into a proposal to build a larger standalone museum instead.

In early 1981, Cumberland received a $200,000 joint federal and provincial loan (which was later forgiven) under the Travel Industry Development Subsidiary Agreement program (TIDSA). The Village of Cumberland contributed $20,000 toward the museum’s purchase, setup, and landscaping. The newly formed museum society aimed to raise a further $15,000. The plans for a new 372-square-metre building—designed by Hornby Island-based architect Uldis Arajs—left room for future expansion on the lot at 2680 Dunsmuir.

Cumberland resident Tom Mumford, who was 104 years old, cut the ribbon at the new museum’s official opening in October 1981. Since then, there have been few renovations to the building. A replica coal mine in the lower level was built by retired local coal miners in 1986 with a provincial New Horizons grant and money from the Village of Cumberland. In 1993, the OAP Hall and Cultural Centre that adjoins the museum was built, adding a small amount of exhibition space and archive storage, and in 2017, a Canada 150 grant was awarded to make the front entrance more accessible.

Raymond Heung, a trustee of the Y.P. Heung Foundation in Vancouver, became interested in our little museum after our involvement in the Chinese Canadian Artifacts Project in 2014. The foundation has funded some major initiatives for the Cumberland Museum since 2018 and is generously contributing to the museum’s current major facelift. The work includes updating electrical, mechanical, and heating systems, adding an accessible washroom, and expanding archival storage.

Barring any construction delays, the museum is expected to reopen October 2021. The new exhibits will continue to be dedicated to telling the story of the people of Cumberland—“the rich, the poor, the powerful, the rebellious, the righteous and the radical.” But now there are more stories and more points of view to explore. The exhibits on the main floor will feature some familiar large artifacts, but now the displays will also highlight more items from the amazing archives and collections—letters, photos, ticket stubs, memorabilia—a more personal view than has been previously seen. These display items and stories will change on a regular basis, too, with new exhibits planned every 18 months to two years that will showcase much more of the collection. I’m really excited about the permanent exhibits in the basement: the mine will have better lighting and more interpretive information. New displays will tell stories about all the people on the land, including First Nations; how land use has changed over the past two hundred years; and what it means to be a Cumberlander today.

It’s all part of the continuing evolution of legendary and historic Cumberland.