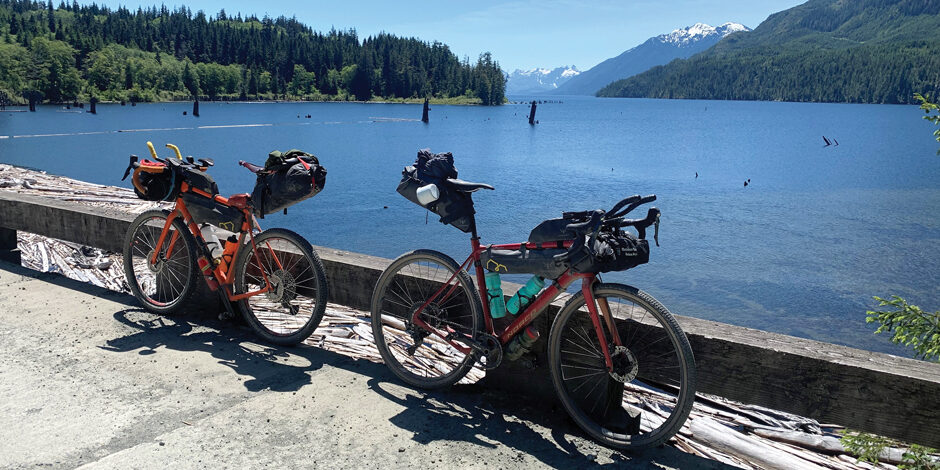 WERE IT NOT FOR THE BIKE

This past January, I received an email from the organizer of the BC Epic thanking me for my registration.

Which was odd, because I had never signed up for the event.

It turned out that my good friend Rob Trainor had gone ahead and done that on my behalf. In early September 2021, Rob had ridden his gravel bike along the back roads of Vancouver Island from Cape Scott to Mile 0 in Victoria—a distance of 680 km—over the course of four days.

That was the first of a trifecta of two-wheeled projects he intended to do over a one-year period in support of his goal to raise a million dollars for cancer research. The final one would be a three-week trip along the 2,745-mile Tour Divide route (from Banff to New Mexico) in the late summer of 2022.

In between these two events, he planned to complete the BC Epic, a 1,000-km, self-supported, off-road bikepacking ride/race from Merritt to Fernie. This was the one he’d decided to drag me along on. It was slated to begin June 25, 2022.

Even the best-laid plans don’t always work out, and this was far from the best-laid plan. Unfortunately, logistical issues prevented us from heading to Merritt for the grand départ. That didn’t stop us, though. New plans were hatched. A new gauntlet was thrown. A new challenge was set.

On June 24, 2022, we pedalled away from the Cape Scott trailhead, following the same route Rob had taken the previous year. Unlike his trip in 2021, we would ride without support (no vehicle to carry extra water, no meals cooked for us at the end of the day, and no mechanic to fix our bikes). We were also hoping to ride the same distance in three days instead of four.

At least that was the plan.

I would love to say that I wasn’t a little apprehensive about the next three days, as we watched Gary Egli, Rob’s long-time pal and our ride to the trailhead, drive off, but I’d be lying. As the saying goes, “This wasn’t my first rodeo.” I ride a lot, bikepacking is nothing new, and I’m quite comfortable being off the grid. All that said, this was uncharted territory, and we had set a lofty goal to end Day 1 in Buttle Lake, over 290 km away.

About 30 km northwest of Woss, and only 140 km into our three-day trip, disaster (word chosen for dramatic purposes) struck when Rob broke his carbon seat post. After a creative but temporary trailside repair, we limped our way into Woss. I rolled into the Lucky Logger Pub and ordered us a couple Cokes and double cheeseburgers while Rob headed to the gas station in search of epoxy and a small pipe clamp. After unsuccessfully seeking this unicorn from a steady stream of backcountry motorcyclists topping up their fuel tanks, Rob was relieved when our new friends at the pub dug out a rusty, but serviceable, two-inch pipe clamp. Crisis averted.

We got into Buttle Lake just after midnight, three hours later than expected. Curiosity—or maybe Rob’s and my muffled guffaws as we washed off 290 km of filth—drew the couple in the campsite across from the water pump our way. We never got their names, but that didn’t matter. After we told them what we were doing and why, the young man told us that his dad had recently passed away from cancer. Through tears, he invited us for a beer, but with at least another hour of preparation and organization before we could crawl into our bivy sacks, we had to decline. We rolled back to our campsite in silence, both caught up in our own thoughts after this brief but emotional encounter.

Conversation between us on Saturday morning was less than buoyant. The legs were heavy, the day was shaping up to be one of the hottest of the year, and doubts about making it to our planned destination of Kissinger Lake (about halfway between Port Alberni and Lake Cowichan) were setting in. Even when we got onto easier, more familiar roads, our mood remained sombre. We were considering extending our ride to four days when we ran into Gary and Phil, who happened to be out for a ride of their own.

I failed to mention earlier that Gary, our chauffeur from the day before, is a cancer survivor. In the years prior to his diagnosis, he and Rob logged thousands of miles on bikes, including for the Ride2Survive charity ride (the same fundraiser Rob and I were currently riding for). Given the state I was in, I don’t have much recollection of the conversation, but I clearly remember feeling that I didn’t want to let Gary down. We would carry on.

During a quick stop at Rob’s place to replace his broken seat post and change into fresh cycling kit, we decided to lighten our load and ditch our sleep systems in favour of a hotel in Port Alberni. This also meant cutting Day 2 a little short and making Day 3 a little longer. So rather than trying to race for Kissinger Lake, our only goal was to make it to Twin City Brewing before last call. We made it with 20 minutes to spare.

Despite a solid six hours of sleep and bellies full of flatbread and craft beer from the night before, the fatigue from the previous two days had caught up to both of us. Our legs were even heavier than the day before, the bugs were bad, and small bike problems were eroding our resolve to keep turning the pedals over.

Conversation started to wane, and when words were spoken, they were few and far between, especially after we spontaneously chose a seemingly faster route that turned out to be longer.

When we rolled into Lake Cowichan, we met a beaming young couple on fully loaded bikes with a soundly sleeping toddler safely tucked into the dad’s bike trailer. They were several days into a week-long trip that started when they rode their bikes onto the ferry in Seattle; today they had ridden up from Shawnigan Lake. On the A&W patio, we exchanged stories from the road, and Rob and I both reminisced about adventures with our own kids from years long past. Then we went our separate ways.

In the final kilometres of our adventure, we were again greeted by Gary. He had made the trip to Victoria to pick up our battered bodies and ride the few final kilometres with us for our own version of the Yellow Mile. In this Ride2Survive tradition, cancer survivors wearing yellow join the riders for the final mile of the trip.

As I followed Gary and Rob along the Galloping Goose Trail and then along the harbour toward Mile 0, I couldn’t help but reflect on the past days’ events—all 680 km and 6,934 m of elevation gain—and on how amazing it is to ride a bike. For many people, including myself, the bicycle defines who they are and makes their world so much better.

After I recovered from the ride, I realized Rob had done me a favour by dragging me along. Yes, there were moments of self-doubt where we questioned why we were doing this. But we were here by choice—and by privilege. Not everyone has the time, or the means, or the capacity to do what we had just done.

In a car, you move through the world. On two wheels, under your own power, you’re immersed in it. You feel the full heat of the sun; there is no escape from the rain. You can hear the trickle of a creek as you roll over the bridge. You find yourself caught in the middle of a herd of elk.

I would have experienced none of this, were it not for the bike. 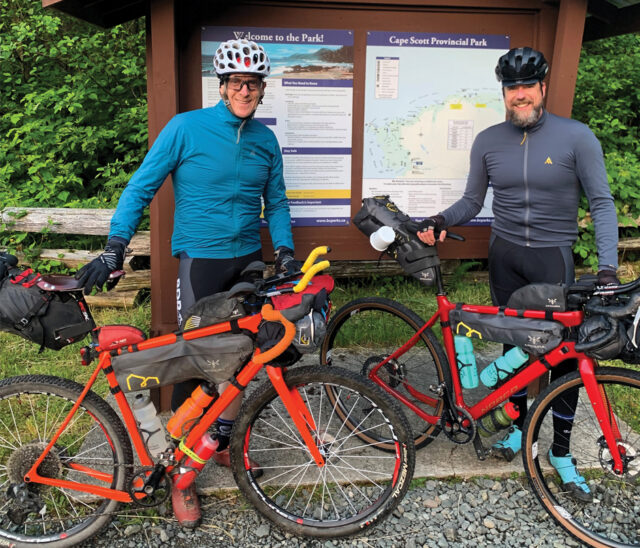