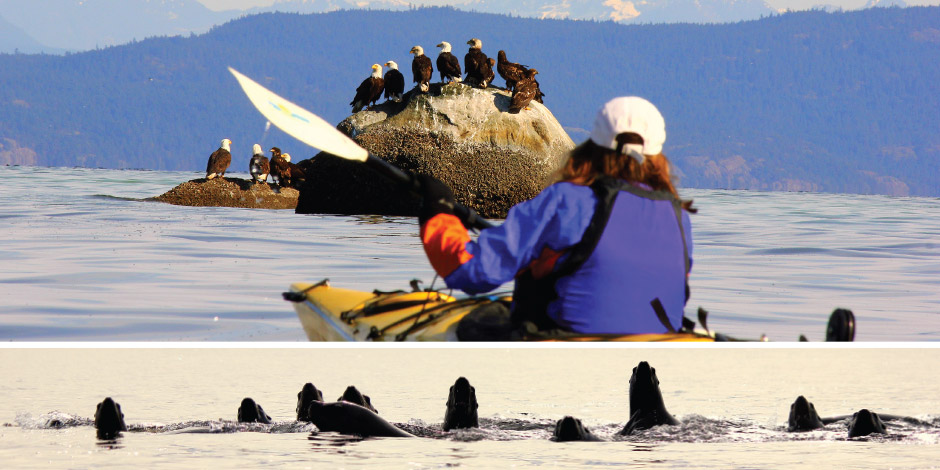 An ecological highlight of the Comox Valley winter arrives alongside these fascinating fish.

One of our most memorable experiences in the Comox Valley began on March 1, 2015 when we received an email from a friend who had just been cycling past Pt. Holmes, an ideal area for viewing the herring run phenomenon. He reported seeing hundreds of gulls and sea lions, and a man kayaking through the green water of the herring spawn. The following day we loaded the kayaks onto the car and headed to the point, heavily anticipating a chance to witness his description of events in person. We could hear the sea lions and the loud squawking of circling gulls immediately upon arrival, and people were fishing for herring from the end of the boat launch. We couldn’t wait to paddle out.

We sat in our kayaks in awe. Surrounded by a frenzy of activity, there was so much happening on the surface of the water that we were unsure of where to look next. Everywhere we turned, seals popped their heads up, some with herring clenched in their jaws. A raft of sea lions was barking and further out, herring seiners were busy at work. Eagles congregated on rocks, and light winds and clear skies allowed for the visibility of the mainland’s snow-capped mountains in the background.

Herring are a fascinating species of fish. Distinguishable by a small head, silver body, and dark colouring that runs the length of their back, the Pacific Herring seek out shallow estuaries and bays for spawning in February and March. They arrive in such numbers that the male’s milt colours the water green. Typically preferring eelgrass, seaweed, and other submerged vegetation for spawning, a single female may lay as many as 20,000 eggs. Perhaps even more remarkable is that once spawning is set in motion all of the herring in the area begin to spawn, which may produce such staggering densities of 6,000,000 eggs per square metre. By now the milt has likely coloured the water green for kilometres along the shore. This incredible abundance helps attract predators from both above and below the water to feast on the herring and eggs. The fish are a true keystone species, since so many other animals rely on them for food.

If conditions abide, kayaks are a perfect vehicle for observation, allowing viewers to easily manoeuvre in and around the shallow and rocky shoreline, though onlookers can also experience the action that occurs just off shore. Shortly after our initial experience we spent another three days revisiting the same spot, in awe of the natural abundance of the Comox Valley and grateful to witness the natural spectacle in the heart of winter.

The herring run occurs annually in late February/early March. More information can be found in the online nature guide at comoxvalleynaturalist.bc.ca.