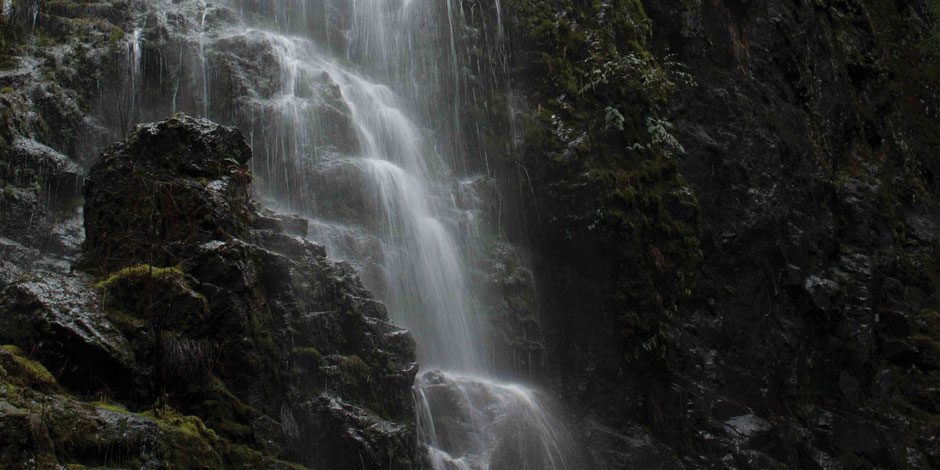 WHEN IT RAINS, IT POURS

Winters in the Valley aren’t what they used to be. What does this mean for our water supply?

I grew up on Vancouver Island, the fourth of five generations of my family to have done so. I have had the great fortune of hearing stories from the previous generations of how the landscape and seasons have changed.

Family stories of being able to drive a car across a frozen Elk Lake in Victoria in the winter months, or the sounds of ice skates ringing through the air on Quamichan Lake in the Cowichan Valley, have stayed with me. These stories were not about one-off events. They represented “the way things were” here on the Island.

Long-time Cumberland resident Terry Kerton once told me that logging operations in the Comox Lake watershed would typically shut down by Thanksgiving, because after that time of year there would be too much snow along Comox Lake to extract the logging equipment from the watershed.

And according to another elder from the Comox Valley’s settler community, the depth of snow along the area now occupied by the Inland Island Highway (well before it was built) was commonly at the same height as the four-foot fence posts surrounding the farm fields.

Fisheries scientist Daniel Pauly coined the term “shifting baseline syndrome” to describe the slow and steady amnesia that takes place through generations. It materially affects what we think is “normal” in our environments, our frame of reference being what we remember as children, perhaps qualified by stories from our parents or grandparents. However, if we consider only the past 50 years or so, we may be getting an incomplete picture, one that fails to capture the true magnitude of change in recent centuries.

Bill Floyd, a research hydrologist for the province of BC, and his colleagues at the Coastal Hydrology and Climate Change Research Lab at Vancouver Island University (VIU) are taking a keen interest in changes within the “cryosphere” on Vancouver Island and the Coast Mountains. The cryosphere is the part of the planet that is made up of ice and snow. As director of the lab, Bill oversees teams who are measuring effects on these critical parts of coastal BC’s hydrological system resulting from a changing global climate. The hope is to understand the regime shift that appears to be underway.

For most people in the Valley, when climate change comes up in conversation, our minds immediately go to the iconic Comox Glacier: “What will happen when it is gone?” But the real dilemma may not be about the rapid loss of ice.

“Most people don’t give a second thought to the snow way up in the mountains, but it is critical to water supply, to fish and our forest ecosystems, and to our economy,” says Bill. Locally, there’s a lot on the line. Comox Lake provides drinking water to a rapidly growing population of over 45,000 people, is a source of hydroelectric power, and is critical to the tens of thousands of salmon in the Puntledge River watershed.

Bill describes how the hydrological systems of many watersheds on Vancouver Island are rainfall dominated. Here, when it rains, it pours, and flooding issues typically arise from October through December. These watersheds are described as “pluvial” systems.

By contrast, in a “nival” system, the melting snowpack in the spring provides the main source of surface water, and flooding typically happens in May.

However, in some of the watersheds on Vancouver Island which include the larger mountains in their headwaters, we have a hybrid nival-pluvial system. Although most of the river flows still peak during big autumn rain events, the slowly melting snowpack in the mountains can be very important in mitigating low flows in the summer months. Such is the case with the Comox Lake watershed.

Or at least it used to be.

But what if precipitation in our mountains during November and December were to fall primarily as rain and not snow? What if the annual winter snowpack were to decrease by 70% or more and warmer spring weather were to melt that already reduced snowpack sooner?

This is exactly what climate models such as those used by UVIC’s Pacific Climate Impacts Consortium (PCIC) are predicting will be the case in the Comox Valley in the coming decades. Our hydrological regime is changing rapidly from a nival-pluvial hybrid to simply a pluvial system. So although the models predict a small increase in annual precipitation in the future, very little of that will be stored as winter snow and therefore won’t be available to slowly recharge streams, rivers, and lakes in the summer months.

What this means for the Comox Valley in years to come has yet to be seen, but Bill Floyd hopes the work his team is doing will help lead to new methods of water management that will be crucial for future generations.

While it may be premature to sell your skis, one thing is certain: your great-grandchildren will listen with disbelief when you tell them stories of the way things used to be in the Comox Valley.