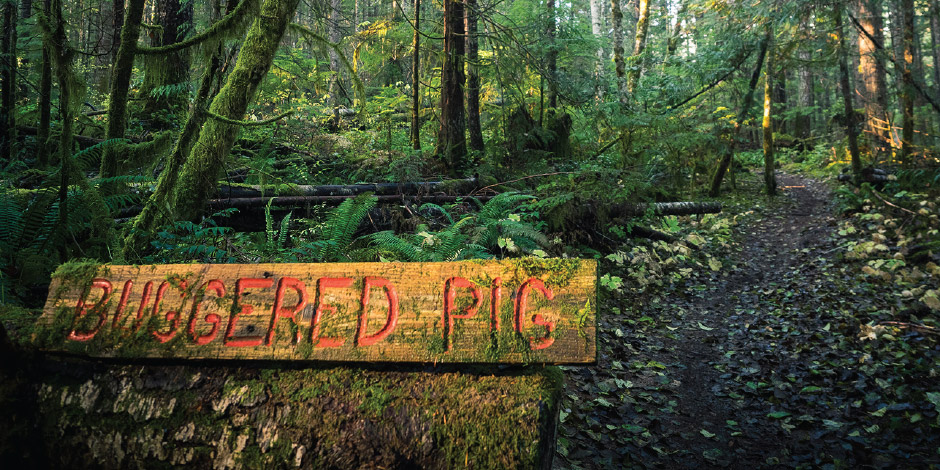 Where The Trail Begins

Trail building in Cumberland dates back to the 1980s, when a freewheeling group of tree planters and mountain bikers began carving lines around the local dump, christening them with names like Subhuman, Bear Highway and Stinky Pigeon.

In the ’90s, those trail builders shifted their attention to the gnarly, forested hills south of the village. Between Cajun tuna melts at the Small Affair Café, where they’d leave a freshly rolled joint as a “Chef’s tip,” they began creating a vast trail network that now comprises nearly 80 kilometres of Vancouver Island’s most legendary singletrack.

The increasingly familiar names of these trails pay homage both to Cumberland’s blue-collar heritage and the inexhaustible creativity of the people who carved them from the mountainside. But what do they all mean?

I asked two local living legends from Cumberland’s mountain biking community—Matt Powsey and Jeremy Grasby—for the stories behind the names of some of Cumberland’s most iconic trails.

What’s in a name?

BEAR BUNS: Legend has it that local builders Al Munday and Terry Lewis were about to enjoy a well-deserved break from carving this trail when they discovered that a hungry bear had absconded with their cinnamon buns.

BROADWAY:  This was one of Cumberland’s first trails to be built by a (mostly) female crew—or, as they put it, “a bunch of broads”. Off Broadway and 42nd Street continued the musical-inspired theme.

BRONCO’S PERSEVERANCE: James Powsey built this trail in the late ’90s and named it in honour of Cumberland’s William “Bronco” Moncrief, then B.C.’s longest-serving mayor. The trail follows the precipitous upper flank of Perseverance Creek.

BUCKET OF BLOOD: This trail was named after a once-infamous Cumberland watering hole called the Wellington Hotel. Fights at the Wellington were evidently so commonplace that locals knew it by another name—the Bucket of Blood.

BUGGERED (BUTCHERED) PIG: Tommy Ma, a Cumberlander from a bygone era who was affectionately known as “Tommy the Pig,” once ran a slaughterhouse at what is now the base of this trail. Any pig that found itself at Tommy’s was certainly…  well, you get the idea. The name was later adjusted for more delicate audiences.

HAI GAI: Hai Gai (literally “Lower Street”) was the name of a dusty thoroughfare in Cumberland’s once-bustling Chinatown. If it still existed, and you could imagine following its trajectory out of town and up in to the hills, it would follow roughly the same line as this trail.

POTLUCK: Built by local trail builders, The River Rats, this trail gets its name from the clandestine cash crop discovered when it was built.

SPACE NUGGET: After Black Hole was built and named after a nearby bore hole left over from Cumberland’s mining days, Space Nugget continued the intergalactic theme while acknowledging the distance covered in such a small “nugget” of space. That space nugget was also a term for particularly dank weed was purely coincidental. Really.

TEAPOT: Named after the kitchen implement found near “Starfish Junction” – the confluence of several trails where the aforementioned teapot currently hangs from a branch.

TRUFFLE SHUFFLE: Every ’80s child will remember the scene from the Goonies in which Chunk was ordered to reveal his namesake belly and convulse wildly, in a move referred to as “the Truffle Shuffle”.

TWO AND A JUICE: This trail spits out near an entrance to the old #3 mine, where hungry workers would call out their orders to an enterprising man selling sandwiches and drinks. “Gimme two and a juice!” they’d yell.

WOOKIE TOOTHPICK: While working on this trail, local builders Mario and Curtis discovered a set of antlers that a mouse had been gnawing on. “Looks like a toothpick for a Wookie,” one of them remarked. The name stuck.

TIED KNOT: This trail was built by friends of a local mountain biking couple and “given” to them as a wedding gift when they “tied the knot”.