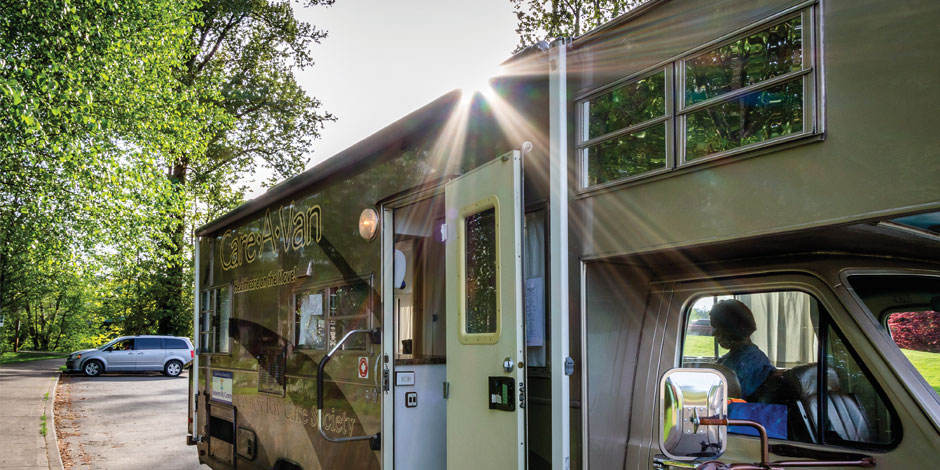 WHEREVER HELP IS NEEDED

Celebrating 10 years in the Valley, the Comox Bay Care Society’s mobile Care-A-Van continues to drive forth positive values in our community.

For two decades it traveled and camped with couples and families, as most RVs do, but for the past 10 years the big Ecoline 350 has been fitted out as the Comox Bay Care Society’s mobile health unit. Known as the Care-A-Van, you’ll see it stopped at various Valley locations where the need is greatest.

In addition to fuel and regular mechanical maintenance (the latter provided by Sunwest RV, which houses the van and originally donated it), what keeps the Care-A-Van rolling is “a genuine belief that if you have privilege, you have an ethical responsibility to be compassionate.” This is the main value that drives Sabina Acheson, a nurse and Comox Bay Care Society’s coordinator.

The Care-A-Van travels to various stops three to four times a week, and the schedule is posted on the Society’s website. The selection of routes and workers on board (usually three) are determined by community needs. There is always a volunteer driver and a nurse, and depending on the route and the timing there may be a physician, dentist, social worker, mental health worker, harm reduction worker, or an advocate for legal matters. Food, water, clothing, bedding, and harm reduction items are also distributed.

Often, BC Housing vulnerability assessments are done with people who access the van, and the workers help with BC Housing registration. “I see our work as evaluating what makes it hard for people to get housed and stay housed,” says Acheson, “and addressing the different domains of what makes a person vulnerable.”

The change from stability to vulnerability can happen quickly and unexpectedly, and Care-A-Van is ready to help. In December 2016, John (real name withheld) walked up to the Care-A-Van with broken glasses, cracked dentures, and several injuries. He was in his mid-60s, without possessions, without a home, and seeking help.

Not long before, John had been a carpenter, living on his family property with his wife. He was the sole income-earner. He had a home, and he had a stable relationship. Suddenly, a big life-change occurred. John fell off a roof at work and injured himself to the degree that he was unable to return full-time. He was in pain. He began to self-medicate with alcohol, which put stress on his marriage and led to divorce. He moved off the property and into a friend’s trailer, but the trailer burned down, and he lost all possessions other than his truck. Soon after, his truck was involved in an accident, and he was attacked during a robbery.

On the day he found and entered the Care-A-Van, John received wound care and nursing services, referrals for a physician, dental and optometry care, assistance in obtaining new copies of ID lost in the trailer fire, a referral to substance use intervention services, new clothing, toiletries and a sleeping bag, nutritional support from the Society’s food program, and a referral to the Homeless Outreach support worker. The Society’s advocate helped John with applications for pensions and subsidies.

John cried with relief and told the Care-A-Van staff he’d had nothing left in him. He got everything he needed in one place, and he didn’t even have to look for it, because it came to him. Not long after receiving support, John was living back on his family property, back at work, and feeling secure and stable.

It is the 10-year anniversary of the Care-A-Van, and the mobile health unit has helped 1700 people by reaching out directly. “It’s a public service,” says Acheson. “We don’t view it as a service only to marginalized people. It’s a benefit to the whole community.”

To learn more about the Comox Bay Care Society, view its community partners, and find out how you can help, go to cvcareavan.ca.